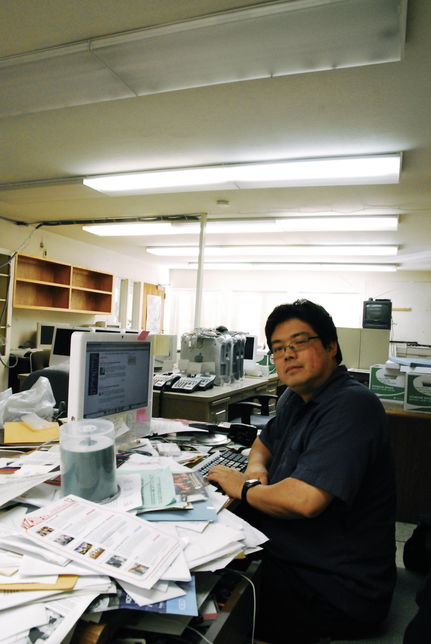 UPDATE 12/16/09: The Hokubei Mainichi is the final Japanese-English news Web site in San Francisco. The Nichi Bei Foundation elected not to continue the thrice-weekly Japanese edition that the Nichi Bei Times published. Former Hokubei senior editor J.K. Yamamoto will continue to update the Web site from the Hokubei office until a new tenant is found. After that, he will update from home as long as the Hokubei company keeps the site running.

CORRECTION: Delia Tomino Nakayama’s surname was misspelled in a previous version of this story.

One of the last bilingual Japanese-English newspapers in San Francisco has ceased its print publication and will likely end its Internet edition in the near future, leaving Japantown residents disappointed and searching for new sources of information.

In a  brief letter to readers, Hokubei Mainichi President and CEO Don Yamate explained that the newspaper would halt publication because of worsening finances.
"All the Hokubei staff have been fired," former Japanese chief editor Shintaro Tanaka said as he boxed up folders in the Octavia street office. He said that the Internet edition will continue only as long as the Hokubei company continues to pay Web site costs.
"There’s just one man updating the Hokubei Web site now," Tanaka said, pointing to former senior editor J.K. Yamamoto, who continued to work at the only desk that had yet to be cleared.
"We have to be out of the office by the end of the week," said Yamamoto in early December. He  now works on the site as a volunteer. "But I will continue to publish from home."
The Hokubei decision came just 50 days after its former rival, the Nichi Bei Times, closed. Although an offshoot of the Times, the nonprofit Nichi Bei Foundation, still prints a weekly English edition and thrice-weekly Japanese language editions, the amount of coverage has been scaled back considerably. The struggles of both papers have left Japantown residents frustrated.
"It’s very inconvenient," Keiko Sajan said as she sat with three friends drinking tea and coffee in the Japan Center. She said she used to read the Hokubei every day. Sajan, the only one of the group of four who spoke English, said she will now get her news from television.
"Tragic," executive director of the Japantown Task Force Robert Hamaguchi said as he held up the Hokubei final edition. "It’s just unfortunate they couldn’t have come together with the Nichi Bei Times."
Hokubei CEO Don Yamate did offer a glimmer of hope in his letter to readers, writing, "The company will continue to seek investors and make every effort to once again become a media outlet serving the community." But those prospects have yet to materialize.
In the opinion of Hokubei columnist Delia Tomino Nakayama, the online edition will last until early 2010 at the latest. The paper has struggled to raise the $500 needed just for Internet-related costs, said Nakamaya, who appealed for support in her column after learning of the newspaper’s demise.
"Without a newspaper, a community is silenced," she wrote. "As Japanese Americans, we know very well the terror of silence, the resounding silence of America as we were interned during World War II when no one spoke out against our four-year imprisonment."
The Hokubei was created after those war years in 1948, and from 1977 to 2007, the paper was housed in a large building on the corner of Post and Webster streets. But with declining revenue, the newspaper company sold the building to Viz Media in 2007 and moved to 1710 Octavia St. The Post Street building is now occupied by  New People, which showcases contemporary Japanese pop-culture, and houses a Japanese themed art gallery, movie theater and small boutiques.
For now, all that remains of the Hokubei are dwindling posts and a small plaque in the front window of New People, which recalls the way that Hokubei chronicled vital news not covered by the mainstream press and helped unite the Japanese American community.