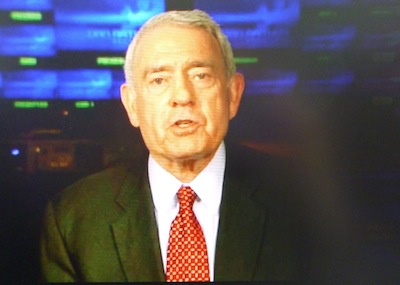 Last week’s edition of “Dan Rather Reports” featured a revelatory 13-minute report on the San Francisco Public Press and a handful of other nonprofit journalism startups around the country whose nonprofit status has been held up at the Internal Revenue Service for months.

The segment, “Taxing News,” (April 10 edition, “The Queen of Green” — download in iTunes for $1.99 or by subscription on Xfinity by Comcast) examined the Public Press’ 27-month-long struggle to be named an independent 501(c)3 nonprofit organization.

In the show, broadcast on HDNet, Rather said that like other startup news organizations, the Public Press could benefit greatly from the IRS designation because its community-supported membership model relies largely on individual donors for financial support to sustain its mission of publishing public-interest local news online and in print. her’s investigation revealed that the delay results from an IRS re-examination of the decades-old criteria for determining which groups fall under the “educational” exemption in awarding nonprofit status; journalism is currently not on this list.

“What’s going on is that we are seeing a shift in the journalism industry in terms of the models which are being used to carry out the act of journalism,” said Jeff Hermes, director of the Digital Media Law Project at Berkman Center for Internet and Society at Harvard University. “You have more applications coming into the IRS — the IRS stands back and goes, ‘Wait. Just wait. We need to figure this out and we need to do it in a logical fashion and it’s going to take some time.” Other nonprofits that are members of the Investigative News Network, a network of more than 60 nonprofit organizations in North America including the Public Press, have run into similar problems, said the group’s executive director, Kevin Davis.

“If the IRS were to basically stop handing out 501(c)3’s, or worse, pull back from existing 501(c)3’s to limit their functions, then effectively they could kill this new movement,” Davis said.

Rather noted that “nonprofit journalism is hardly a new concept,” citing the Associated Press and National Public Radio, which long ago received nonprofit status. “For decades, both have relied on tax-exempt contributions and donation drives to stay afloat,” Rather said.

Though it can already accept tax-deductible donations through a fiscal sponsor, San Francisco-based 501(c)3 Independent Arts & Media, the Public Press could benefit greatly from official IRS designation. Foundations are more inclined to award grants to organizations with independent 501(c)3 status, which is viewed as an important benchmark for a sustainable operation.