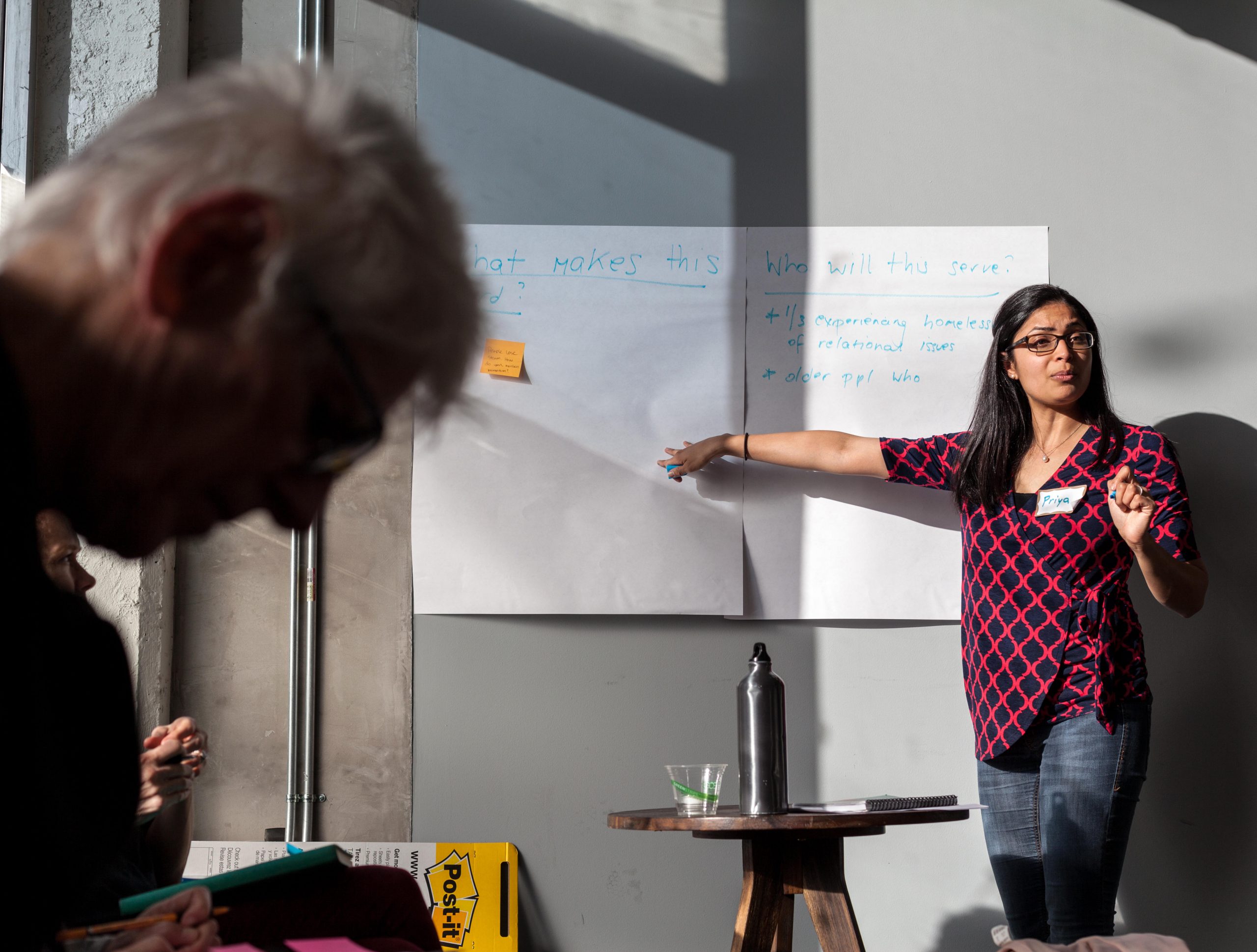 Following presentations on potential solutions to the city’s homelessness crisis, the audience broke into workshops to discuss their favorite ideas. This group analyzed the work of Miracle Messages, a nonprofit organization that reunites homeless people with loved ones. Here, facilitator Priya Kothari takes notes while discussing the difficulties of locating an estranged person’s contacts. Photo by Garrick Wong // San Francisco Public Press/Renaissance Journalism

In 20 years of homelessness in San Francisco, Moses Carbins has spent time in most of this city’s shelters. “Some days,” he said, “you wake up invisible. It becomes sort of like a pit. It’s just another day to die.”

It was lost on no one in an audience of more than 200, however, that Carbins has lived — thanks to “empathy, compassion, a network of friends” — and has been housed now for four years. All hung on his every word as he spoke on a panel at “Solving Homelessness,” a community workshop presented by the Public Press on Jan. 25.

The symposium, held at the Impact Hub in the Mission District, was an all-day gathering of advocates, architects, journalists, activists, service providers, innovators, city officials, policymakers and homeless men and women to brainstorm solutions to homelessness.

But, before you can solve a problem, you have to know what the problem is. And, when it comes to addressing homelessness, there’s a lot the general public could do well to know.

Some of the most resonant words spoken during the all-day affair were also some of the first. On the day’s opening panel, Margot Kushel, a UCSF professor and a doctor at San Francisco General Hospital, said that even the basic way we categorize homeless people is wrong and dehumanizing.

“There is no such thing in my mind as a homeless person,” she said. “There are people who experience this.” Homelessness, in other words, is not an identity. It’s an experience — a phrase that resonated with Carbins in particular.

And the doctor knows the culprit for this experience. “Look, I love medical conditions,” she said. “But homelessness is caused by a lack of affordable housing.”

That statement hit home for Joe Wilson, the executive director of Hospitality House, who was himself homeless in the 1980s. There are ways to help homeless people in drips and drops — he has committed his life to this — but fully addressing the situation would require a remaking of society.

Putting Money in the Right Hands

The money to solve homelessness is there, he continued. It’s just not in the hands it needs to be in.

The primary source of affordable housing for minorities is now incarceration, he continued. “This is unsustainable. We cannot have a society and culture that is sustainable given this obscene level of wealth inequity.”

Editor’s Blog: 10 Things I Learned About Homelessness at Our Community Workshop

During a discussion with people experiencing homelessness, organized by Stories Behind the Fog, Shanna “Couper” Orona shared her journey from “living the life” in Diamond Heights to a tent encampment on Erie Alley. Today she lives in a 10-by-10 box home behind the Impact Hub. A retired firefighter who was injured in a blaze, she said she went from being the wife of an attorney, driving an Audi and “spending my money,” to fixing bicycles on the sidewalk.

There was a divorce. There was a spree of couch-surfing. There was that horrific moment when all the money was gone and she had nowhere to go and no idea what to do. “There is,” she said, “no manual for being homeless.”

But nothing was so hurtful as the day a woman walked out into oncoming traffic rather than share the sidewalk with Orona. She offered a wry grin, but it was not funny: “It’s not like I’m going to bite you and give you homelessness. I am a strong, smart, educated woman. But that thing she did — that fucked with my head a little bit.”

Asked what homeless people want, Orona made a simple request: A smile, a nod, a greeting. The sort of thing a person offers to another person.

Next came a journalists’ roundtable moderated by Jon Funabiki, executive director of Renaissance Journalism. News organizations included the San Francisco Chronicle, public radio stations KALW and KQED, El Tecolote, Solutions Journalism Network and the Public Press. The Chronicle’s Kevin Fagan, who has covered homelessness and poverty issues extensively since the 1990s, drew nods of agreement from his fellow panelists when he spoke of “compassion fatigue” among readers and editors alike. It’s on the writers, he said, to work around this.

“People say nothing changes. But things do change,” he continued. “This is an ongoing problem. You have to find new ways to report on it. It’s reinventing the wheel, over and over.”

He also offered a personal declaration: “I like homeless people. They’re people! They’re more honest than most politicians.”

In quick succession, architects and service providers then followed with five-minute presentations. Finally, it was time for the audience to break into groups to address what more could be done in this city to improve homeless people’s lives and end this experience called homelessness.

These groups ranged in size from three to more than a dozen. They focused on topics as far-ranging as how to build and license additional dwelling units; how to green-light housing for the homeless in former shipping containers dropped into converted parking spaces; how to enact a universal basic income; and how to move forward with temporary villages of tiny houses on dormant construction sites; and others.

Ideas From Nebulous to Nitty-Gritty

On at least one of the panels, along with well-meaning volunteers and professionals sat actual homeless people serving as experts in the field.

The solutions these panelists presented at the conclusion of an afternoon workshops ranged from the nebulous — “We talked about changing capitalism to compassion!” — to the nitty-gritty — “We pledged to solicit our local supervisors to support passing an emergency resolution using the FEMA guidelines of solutions for the homeless.”

What comes of January’s gathering is yet to be determined. It may be something bigger or smaller than whatever solutions were posited by the participants. The gathering of groups of people who would, ordinarily, only sit next to one another in a jury room or on a bus may yet spark collaborations or movements that have a lasting effect on this city and its denizens, housed or not.

At the day’s end, Jeff Kositsky, the head of the Department of Homelessness and Supportive Housing, dropped by. His earlier scheduled appearance had been disrupted by unforeseen meetings with Mark Farrell, this city’s unforeseen mayor.

Kositsky, for lack of better words, kept it real. When homeless activist and serial mayoral candidate Amy Farah Weiss asked him if he’d meet with her and a consortium of other groups within one week he immediately answered no. “I’m not going to be forced into a meeting,” he said with a tight grin. “I will consider it.”

City Can’t Build Its Way Out

If anyone felt that his department could build its way out of homelessness, he quickly dispelled that notion. “We would need to build 3,000 units per year, without fail. Once we had 30,000 units, then we could begin easing back and filling vacancies internally.” The cost? He estimated $750 million a year.

The math is hard and it is dire. Kositsky, who previously headed service provider Hamilton Families, noted although the city’s 2017 biennial count found about 7,000 homeless people, “the reality is that we’re serving about 20,000 people a year.” He added that it took placing 950 homeless veterans in housing to lower the total number of homeless veterans in the city by 200.

But Kositsky didn’t intend to discourage the crowd. Quite the opposite.

“Some of you have ideas outside the realm of what we’re able to do,” he said. “Raise your own money. You’ll get a lot of support from me and from City Hall if you can show that other people want to latch onto your ideas.”

And, some parting advice: “As a guy who just started working for the government 18 months ago, I need to tell you: The government is not the solution to every problem.”