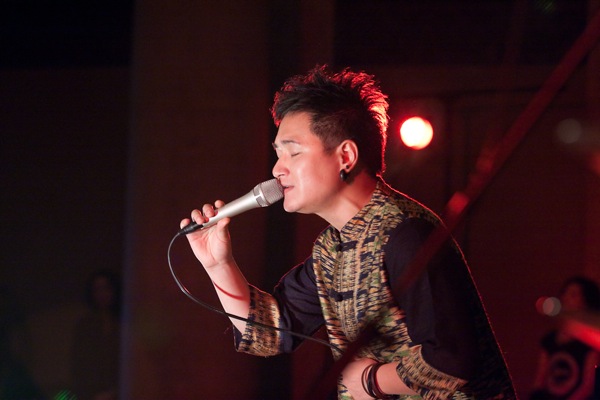 Red lighting and the silky voice of Chinese jazz singer Coco Zhao recently combined to transform the Asian Art Museum into a Shanghai jazz club for a night. The evening was part of a celebration of an exhibition on Shanghai at the museum.

Zhao looks like an Asian pop star with his short spiky hair and charismatic smile. But as soon as his makeshift band, which featured local jazz musicians Mark Izu, Anthony Brown, and Glen Pearson started to play, you knew you were in for a classic jazz set with a modern Chinese twist. Zhao sings mostly in Mandarin Chinese and remixes old 1920’s Shanghai jazz standards with original arrangements.

Zhao, who was called the “boy Billie Holliday” by music critics in Paris, was introduced to jazz music through a friend in Shanghai in 1996. He said the Shanghai jazz songs from the 1920’s have historical and cultural value.

“These songs carried all the history and stories from the past. They made their dreams and we should pass on their dreams to the next people,” said Zhao, whose latest album is Dream Situation.

His music is trying to bridge the gap between the older Chinese generation and the younger, more cosmopolitan one. At times, the older generation does not understand what he is trying to do with his new arrangements.

“Some take it OK, but most of them still find it uncomfortable. It’s very different than what they heard back in the old times,” said Zhao. “Usually Chinese concept is they know what they know. If they don’t know, they might put it in a bad category.”

However, that will not stop Zhao from going forward with his music and doing what he loves. He  lists Betty Carter, Bjork, and Portishead as influences.

Zhao recently accepted a grant from the Asian Cultural Council in New York City, which will support his research of America’s music scenes, primarily jazz and avant-garde. He hopes to learn from acclaimed artists Jay Clayton and Theo Bleckman during his New York stint and collaborate with more artists and musicians as he did for his San Francisco performance.

This was his first visit to San Francisco and he said he loved it.

“I’m from the countryside so I like the more chill, laid-back vibes.”