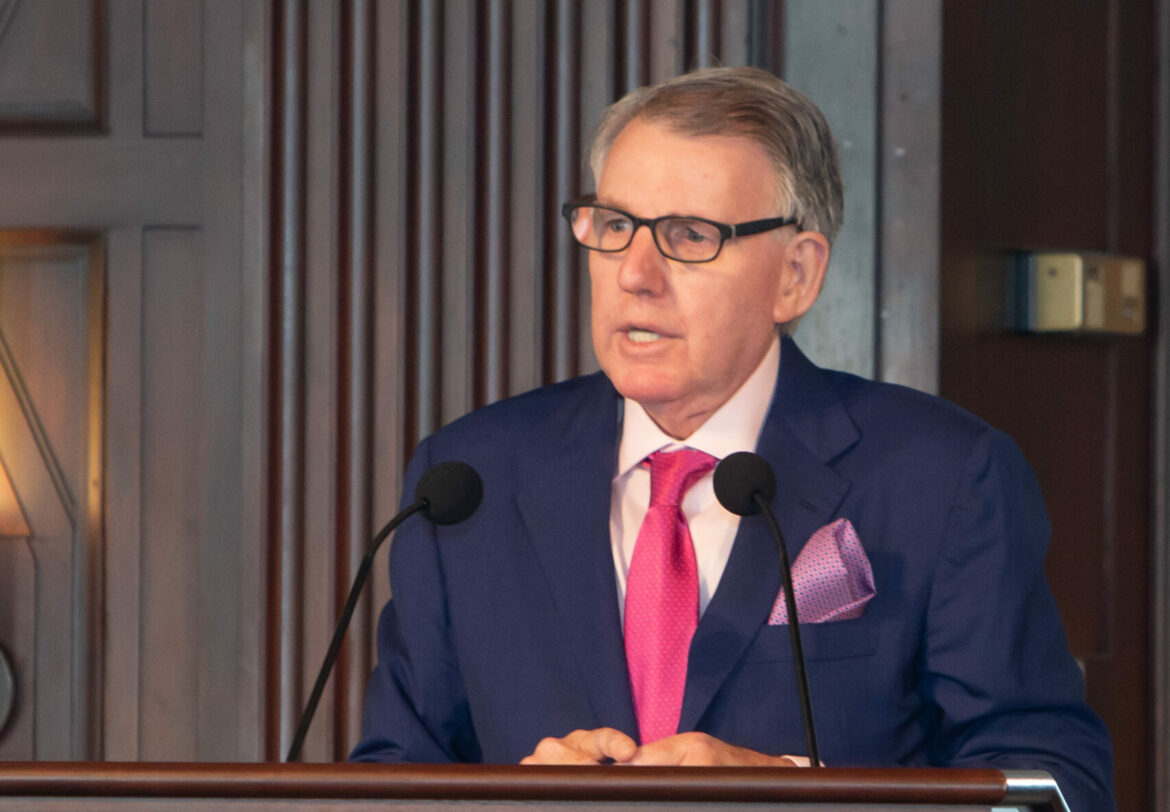 Clint Reilly at a Bay Scholars Thanksgiving Luncheon in 2018 at the Julia Morgan Ballroom.

Disclosure: One of the businesses Clint Reilly owns made a donation to the Public Press in 2017.

The soon-to-be owner of the San Francisco Examiner intends to grow the publication’s newsroom and expand its coverage, diversifying the perspectives in San Francisco’s news ecosystem.

Clint Reilly, a retired political consultant with a real estate and hospitality business who also owns two local magazines, is purchasing the Examiner and SF Weekly after the two papers were under absentee ownership for years. The company he and his wife Janet co-own, Clint Reilly Communications, is expected to take over in January.

“What’s happened in newspapers over the last decade, decade and a half, even 20 years, has been essentially a huge cutback in journalists and costs at the local level,” Reilly said. “As journalists have been laid off, so have the beats that they cover. And so the amount of coverage of local news has declined dramatically over the last 10 years.”

Reilly said he intends to find ways to reverse that trend, hiring more reporters and expanding the Examiner. News media fumbled the transition to digital publishing as advertisers moved to Google, Craigslist and other targeted media, he said.

“It was a license to print money, you know, owning a newspaper. And instead of using that money to prepare for a digital future, the newspaper industry was pretty flat-footed and uncreative,” Reilly said. “We’re starting to see exciting new things happening in print media.”

Reilly, who is also the owner of the Nob Hill Gazette and Gentry magazine, expressed confidence in the future of print publications.

“Yes, a lot of people have fled the print industry, but I’m excited about it,” Reilly said. “But I also think that every smart player in the media business is going to employ digital tactics to communicate and to sell advertising. So, we’re going to do a mix of print and digital.”

He cited daily newsletters and sharp statewide political coverage as examples, but also said he had been paying close attention to subscription models.

“I am watching what’s been going on,” Reilly said. “The New York Times, the Washington Post, the Wall Street Journal, on the national level have been able to dramatically expand the number of digital subscribers they have, and charge substantial amounts of money for their subscriptions.”

Readers can also expect that the new owner will influence the stances the Examiner takes, and Reilly described the paper as having been fairly neutral in recent years.

“Of course, I’m going to have, you know, a strong say in the positions that the newspaper takes,” Reilly said. “I think that in the 21st century, we’re seeing increasingly a blurring of lines between the editorial page and the news pages of a paper, whether we like it or not, or are willing to acknowledge it. Yes, the New York Times has a robust editorial page. But the perspective it takes on the news on the front pages, in the news pages and the business pages, is a slant and a perspective that is, frankly, far more important than what happens on the editorial page.”

His ownership, Reilly said, will not be about cutting costs, but rather about expanding the paper both in terms of its size and coverage as well as in its role in the city.

SF Weekly, Reilly acknowledged, tends to write with a more progressive voice than mainstream publications, and he expressed enthusiasm about its work.

“It has a new editor that people are excited about, it’s got some writers that know how to write and have a pretty accurate perspective, from my reading,” he said. “I’m committed to the SF Weekly. I’m excited about owning the SF Weekly.”

Reilly, who has intervened in the local media scene twice to try to break up media monopolies that were forming in local news, said that the paper having a strong voice would be important to newspaper competition. In the most prominent case, he filed an antitrust lawsuit in an attempt to stop the sale of the San Francisco Chronicle to Hearst Corp. in 2000. That deal included selling the Examiner to much less wealthy owners, which Reilly alleged would undermine the Examiner and remove competition for the Chronicle.