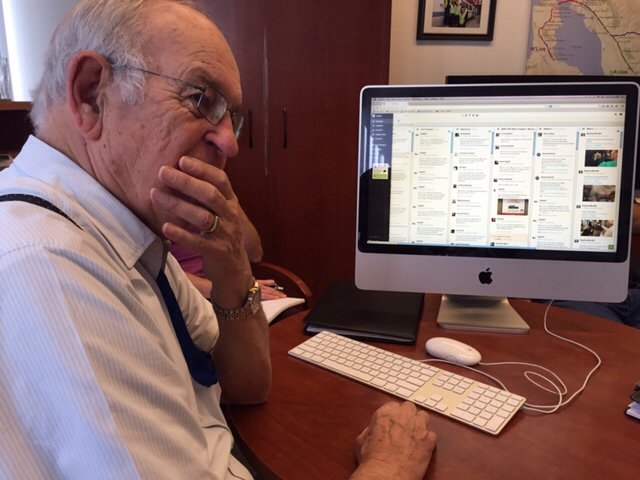 Alicia Trost, the agency’s communications manager, said in an interview later that the forum “was very fast-paced.” Staffers “were shouting out questions and answers, and trying to fit it all into 140 characters,” she said.

Answering questions about crowding, cleanliness, breakdowns, and delays and other service issues, the staffers traced many of the system’s weaknesses to bottlenecks at its merger points. Unlike major transit systems in New York, Washington, D.C., and other cities, BART lacks sidings and redundant tracks. That means it must shut down to perform maintenance on key stretches such as the Transbay Tube, and it means that broken-down trains can disrupt the whole system when other trains cannot get by.

The San Francisco Chronicle recently reported that the aging system also is coping with a massive, recent increase in ridership.

Trost said March was a good time to get public input because the agency is shaping next year’s spending priorities, which its board will choose in June. And she said Twitter provided an ideal platform for engaging many people at once.

During the forum, most queries got quick, single responses. But a few launched longer discussions.

One participant, going by the handle @TaupeAvenger, asked whether the agency could charge higher fares during the busiest periods. “It seems like an obvious way to reduce congestion & raise $$.”

Agency staff (@SFBART) said only that they were “looking at the issue.” Trost said later that the idea has surfaced occasionally in board meetings and most members oppose it. Forum participants had a lot to say about it.

“No that’s a terrible idea,” said @GattoGateaux, “You will hurt working class ppl!!” A participant with the handle @ochutup compared the idea to Uber’s unpopular practice of Surge Pricing.

“Congestion pricing is intended to get users to change their time of use,” said @LilacSundayBlog. “But commuters can’t change their work hours.”

Another fiery exchange ensued when Twitter user @killface007 asked the eternal question: “When will trains run 24 hours?” BART staff said that would “jeopardize long-term safety.” Another person, whose handle was @lolphat, asked how it was that New York’s trains can run all night. Staffers said redundancy is the key. “You can literally shut down one set of tracks to run trains on the other set,” allowing crews to perform maintenance on the closed set, Trost said.

Every train that crosses the bay must pass through the Transbay Tube, and during that time crews cannot work on the tracks. A second tube would cost more than $10.3 billion, based on estimates from 2002, but it would help solve the problem.

Extending train service a few hours later, as many of the Twitter users requested, would push the next morning’s start time back as well.