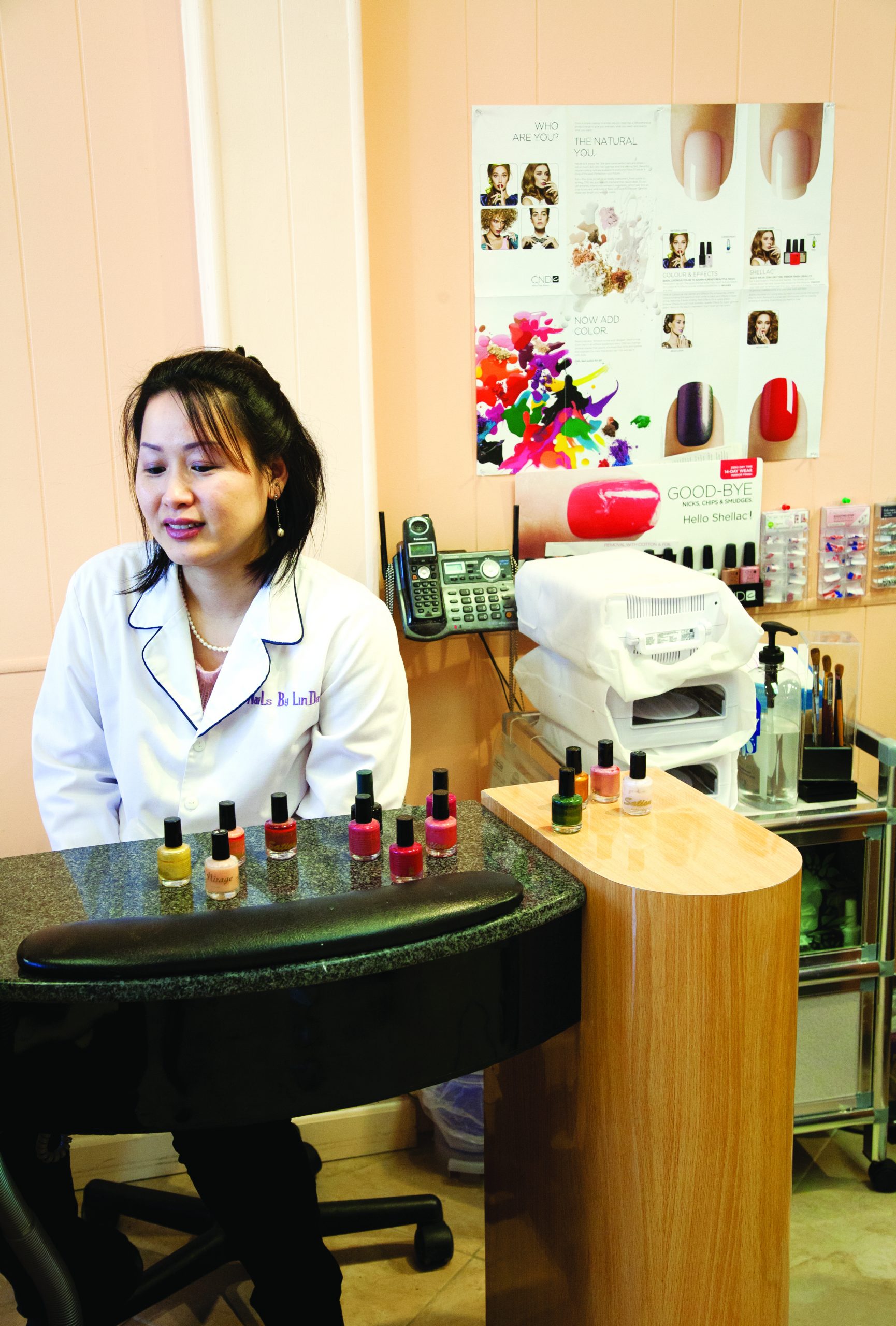 Some nail products are made with a toxic trio of chemicals and have come under regulatory scrutiny. “Whenever they advertise in the nail magazine, I keep looking at advertisements or talking about new product or technique,” said nail salon manager Heidi Hoang. “I like to learn.” Photo by Jason Winshell/SF Public Press

Heidi Hoang was pregnant when she first started working at Nails by Linda in San Francisco’s Sunset District. “There’s a lot of people who say, ‘You have to be careful with this kind of job. Maybe, no more baby,’” Hoang, now the salon manager, said. “I was so nervous.”

Nail salon workers, many of whom are Vietnamese immigrants and refugees with limited English skills, have long endured toxic chemicals that emanate from products they use to beautify their clientele. The chemicals not only produce noxious fumes, but workers often complain of itchy skin, rashes and headaches after prolonged exposure to the substances.

In an effort to combat the problem, San Francisco is developing a set of guidelines to encourage nail salons to go green. In the absence of federal or state regulations protecting salon workers from toxic exposure at work, the city is working to educate salon owners about healthier alternatives under its Healthy Nail Salon Recognition program. Nail salons that participate in this voluntary program will receive official city endorsement, marketing materials to promote their participation in the program, and education on workplace safety. The program is expected to begin by June.

Chemicals such as dibutyl phthalate, toluene and formaldehyde, otherwise known as the “toxic trio,” have long been used in nail polishes, top and base coats. All three are listed under the California State Cosmetics Act as agents that can lead to cancer or birth defects. The polishes are not illegal, however, as long as the ingredients and their potential health effects are listed in the Material Safety Data Sheet, a technical information sheet delineating chemical ingredients and potential health effects. Chemical manufacturers and distributors are required by law to provide this information to people who buy their products; many do not.
Hoang said she asks for the information sheet whenever she restocks her inventory. Suppliers often tell her they will follow up with her request, but fail to do so.
Although California’s nail salon business has more than tripled in the last two decades, safety laws and regulations have not kept up. According to Jamie Silberberger, director of programs and policy at Missoula, Montana-based Women’s Voices for the Earth, federal oversight has been lax.

“Because the law is so weak, companies can use ingredients that are known to cause cancer — or cause reproductive harm — and it’s perfectly legal to do that,” Silberberger said. The federal law is “two and a half pages long and it hasn’t been updated in 70 years,” she said.
Advocacy groups such as the California Healthy Nail Collaborative are leading the fight for new policies regulating workers’ rights and cosmetic ingredients.
In October 2010, the San Francisco Board of Supervisors unanimously passed the Healthy Nail Salon Recognition ordinance — the first in the country to attempt to regulate the use of toxic chemicals in nail products. The program was created to officially recognize nail salons that use healthier products by providing a “good housekeeping seal of approval,” said David Chiu, Board of Supervisors president and sponsor of the ordinance.
Advocates hope this will encourage many of the 200 salons and their 1,800 nail technicians to adopt healthier practices, such as using toxic trio–free polishes, basic sanitation procedures and improved ventilation.
“Rather than being a penalty to nail salons that are doing the wrong thing, we wanted to bring recognition and promotion of those nail salons who are using healthy products,” Chiu said.
Chiu said an outright ban on the toxins would have unleashed fierce opposition from the chemical industry. Instead, he hopes support for healthy nail salons will encourage manufacturers to voluntarily “move in the right direction.”
Public pressure induced many major nail polish brands, including OPI Products, Orly International and Sally Hansen to remove the toxic trio from their list of ingredients over the past decade. But as of last August, brands such as Station, Santee and American Manicure still used at least one of the chemicals in their polishes.
San Francisco’s Department of the Environment is researching what constitutes a safer nail polish and the requirements for nail salon participation in the program. Sushma Bhatia, the department’s commercial toxics reduction coordinator, said her agency has so far identified 80 chemicals in nail polishes, top coats and base coats that may lead to minor eye and skin irritation, and even cancer.
“Out of the 80 chemicals, some of them will be able to be substituted, and others we may not be able to find substitutes for,” she said. “At this point, we want to figure out which ones are really bad and which of the chemicals we can substitute out of our products.”
Although the details of the nail salon program are still being hashed out, Bhatia said the program would also include a health and safety training component for salon owners and employees.

Hoang did not wait for the city program to implement safety measures in her salon. Each nail station is now equipped with a vacuum to suck away excess dust particles. She wears face shields and gloves with all clients. She also offers toxic trio–free polishes and organic nail products in addition to the standard fare.
She said she is looking forward to enrolling in the Healthy Nails program because of the benefits it will provide, including increased safety measures for her and her workers.
“If we try to be the healthy nail salon, first, it’s good for us,” she said. “And second, it’s good for the client and for everybody. Someday if I have cancer, I cannot pay money to cure my cancer. It’s not worth it.”
About a dozen nail salons are expected to participate in the program initially. Advocates hope more salons will join once the program launches and gains more attention from the public and press.
The Department of the Environment will conduct an evaluation after two years of the program. A report to the Board of Supervisors will likely include the total number of salons that participated in the program, the success of their business and the reduction in adverse health impacts.
Julia Liou, co-founder of the California Healthy Nail Collaborative, said many nail salon owners are afraid of the program because of the time and costs associated with upgrading their businesses, such as buying new polishes and investing in ventilation systems. She said many owners don’t realize their salons already have safer products.

“When we did this assessment in San Francisco salons, about half were already toxic trio free,” said Liou, referring to the polish, top and base coats.
Toxic trio–free polishes cost about the same as ones that contain the chemicals, Bhatia said. “So any nail salon, even with a lower budget, can afford nail polishes that don’t contain the toxic trio,” she said.
Advocates are optimistic that a successful San Francisco program will help fuel the movement for tighter regulations at the state and federal level.
Chiu said individuals from the Environmental Protection Agency and the White House are looking at San Francisco’s legislation as a potential model for a national program.
“They’ve asked for more information,” Chiu said. “And we hope that dialogue will lead to a stronger stance against the toxic trio at the federal level.”

This story appeared as part of the Public Press' Spring print edition.