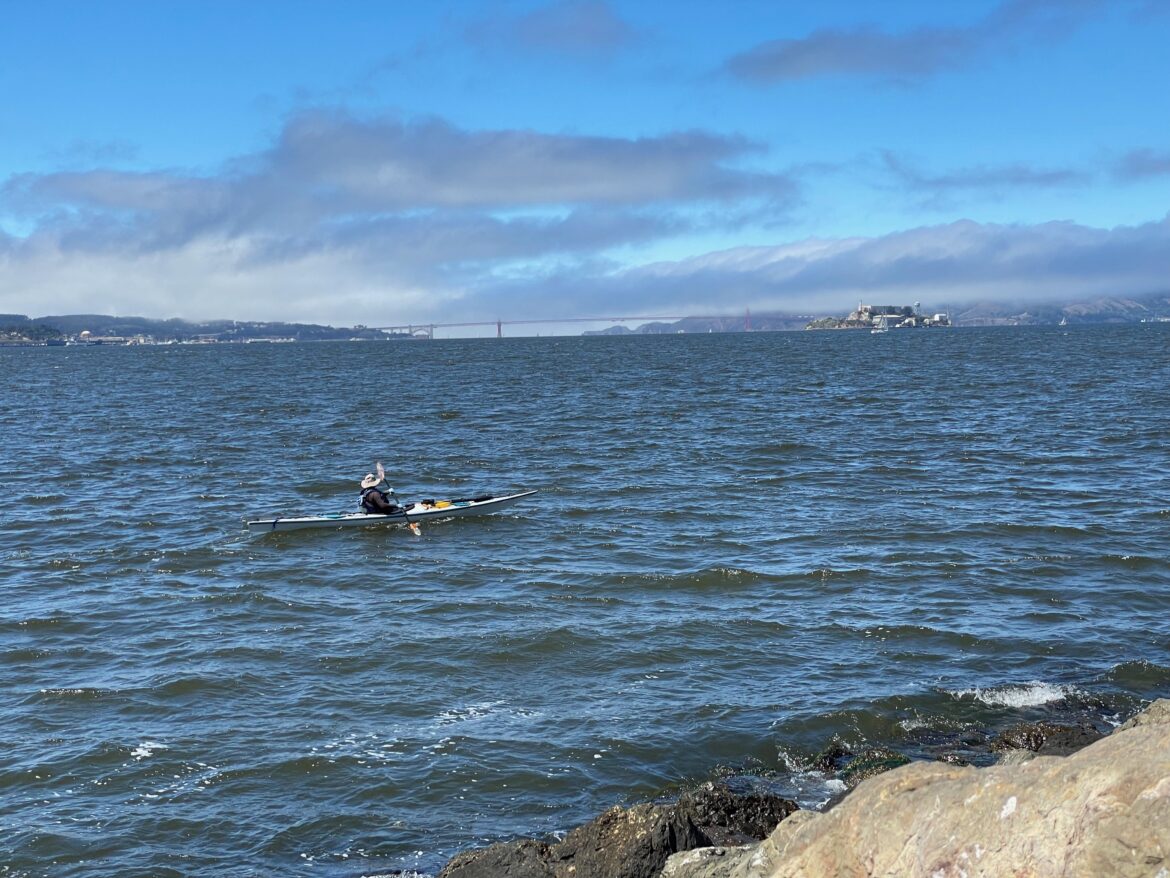 Winds from the Pacific serve as natural air conditioning for San Francisco. That’s usually a blessing, but it means city residents are less prepared for high heat.

Foghorns sounding on the Golden Gate Bridge signal that San Francisco’s “natural air conditioning” is rolling in, keeping San Francisco cool. During summer, the fog prevents triple-digit heat in the East Bay from roasting the city’s homes and businesses.

That pattern is changing. Since the 1970s, San Francisco’s average temperature has increased by 2 degrees Fahrenheit. Now, city leaders are developing new strategies to keep people safe, with infrastructure designed for much cooler weather. The question is whether San Francisco is ready for the next deadly heat wave.

During the summer, chilly waters off the Northern California coast create a cool marine layer that is pulled inland like a blanket by the warmer air in the East Bay. On the other side of that weather pattern, an upper ridge of high pressure usually indicates where temperatures will be hottest.

On Labor Day 2017, the cool marine layer never reached San Francisco, and temperatures predicted to be in the upper 80s, soared to a record-breaking 106.

“It looked like the peak of that ridge was going to set up over the East Bay,” he said. “We were looking at temperatures upwards of 115 for Livermore.”

The ridge ended up 30 miles to the west — right on top of San Francisco. Any possible ocean breezes were blocked by a wall of high-pressure air.

The extreme heat took the lives of three elderly San Franciscans and three more people on the Peninsula. Most died alone in overheated buildings. None of them had called 911. Dozens of other people in San Francisco were taken to hospitals with serious heat-related illnesses, overwhelming local emergency medical services.

Adrienne Bechelli, deputy director of San Francisco’s Department of Emergency Management, said people in the city are at higher risk with even moderate heat.

“Our thresholds in San Francisco are much lower than in other comparable cities nationwide, or even in other neighboring counties, because a lot of homes don’t have air conditioning in our work or commercial spaces,” she said. “So, our spectrum starts with pre-planning — depending on the incident — in the high 70s, but usually low 80s.”

“A couple of days out, when we get that spot report from the National Weather Service, we will hold various levels of meetings with our key city partners, as well as other community stakeholders,” she said. “That would include policy-level meetings, as well as operational coordination meetings.”

Agencies participating in such meetings include the Department of Public Health, the Human Services Agency, the Department of Homelessness and Supportive Housing and the Recreation and Parks Department, as well as the police, fire and sheriff’s departments. Elected leaders and representatives from the San Francisco Municipal Transportation Agency and the San Francisco Unified School District would also take part.

While the Department of Emergency Management coordinates the effort, no one person in San Francisco makes the decision as to which level of response is appropriate.

On average, San Francisco has three days a year over 90 degrees. By comparison, San Jose sees 16.

“We believe that it’s important to have the authority to act at the appropriate and lowest level possible,” he said.

“Now, it’s just standard protocol,” he said. “If it got longer or larger, we’d pull everybody together. And we’d work through what additional resources were needed to support the people in the field.”

“We do so much pre-planning, where we have all of these specific thresholds and triggers where all the city departments responsible during extreme heat know what that threshold or trigger is,” she said. “The Department of Emergency Management holds that authority to ask other city departments to activate their extreme heat operations protocols at a lower threshold.”

When San Francisco officials found themselves scrambling on Labor Day in 2017 to deal with an unexpected, deadly heatwave, many were asking why the forecast was off by 20 degrees.

Garcia, the National Weather Service meteorologist, said the problem was one of scale.

“When we look at models, typically they are in 3-kilometer, 12-kilometer or larger grid boxes,” he said. “And around here, in 3 kilometers, you can go from sea level to 5,000 feet up Mount Tam, and it’s a completely different climate regime.”

Garcia said the system has improved over the last five years, and now the models are based less on a precise forecast and more on probabilities.

Since 2017, the National Weather Service office in Monterey has been reaching out proactively to local municipalities as soon as it sees the threat of rising heat.

In the past, San Francisco would open cooling centers and encourage people to travel to them to get out of the heat. That proved a challenge for some seniors, disabled people and families who had to leave their neighborhoods to find a place to cool down.

“The first are overall public locations, things like shopping malls, museums, local parks, local swimming pools, locations that are accessible year-round to the public,” she said. The second category includes city-operated facilities, such as libraries and community buildings. The third category includes sites that people use in their neighborhoods, such as YMCAs, senior and community centers and homeless shelters. The Department of Emergency Management coordinates with all those groups and tries to get the word out to people who need to use them.

When heat and wildfire smoke came to the city during the COVID-19 pandemic, some people avoided leaving hot houses to go to weather relief centers. Bechelli said that fears about COVID-19 and smoke could put people with underlying health risks in serious danger.

“Extreme heat is much more serious than extreme smoke for most people,” she said.

That’s also true when sheltering at home. Opening a window to bring in cooler, but smoky air is less dangerous than being shut up in a hot room for long periods of time.

Bechelli said she is confident the city is focused on managing increasing numbers of heat waves as the climate warms.

“As emergency managers, we do everything in our power to try to stay out ahead of the hazards that impact our communities,” she said. “We always have areas for improvement, we always are looking for specific corrective actions that we can implement to make our citywide response even better. But I definitely feel confident that we are better established to respond to an extreme heat event now than we were in 2017.”