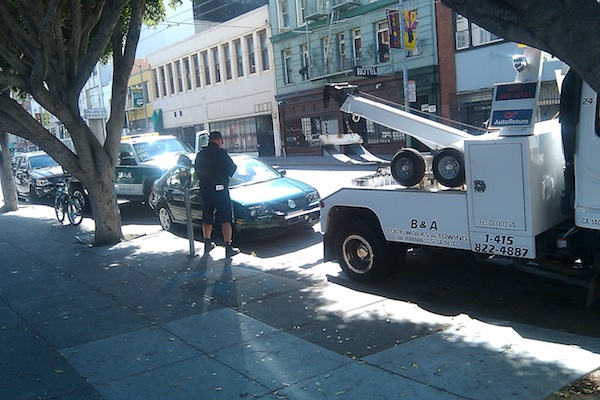 San Francisco is planning to give out more parking tickets because neighbors are complaining, city officials said. On Mission Street, the 4 p.m. start of rush hour brings a line of tow trucks that generate thousands of dollars as they sweep up illegally parked cars. Photo by Jerold Chinn/SF Public Press.

UPDATE 7/11/2012: Listen to an interview with reporter Jerold Chinn on KQED Radio.

San Francisco transportation officials need to do a better job managing parking.  And if they make extra money to balance its books in the process, all the better.

That’s what the head of the city’s Municipal Transportation Agency is telling city supervisors as he tries to close an expected $17 million budget gap over the next two fiscal years.

The nature of the city’s ongoing parking problems will be the topic of an audit from the city controller. That report has not been completed, but will be released to the public “very soon,” said Paul Rose, a spokesman for the agency.

The transportation agency is set to hire 14 new parking control officers, whose job is to rake in $6.5 million more through parking tickets in the next two years. That’s on top of the $270 million in revenue from parking and traffic fines that the transit agency originally anticipated.

The new officers would address complaints from residents — the subject of the city controller’s audit, which will examine how the transit agency can better deploy its workforce on the street.

“There’s no question it closes the revenue gap,” Reiskin said. “But most importantly I think it really will help us better manage the parking regulations were required to enforce.”

He said at a Board of Supervisors budget committee last week that increasing complaints from residents about enforcement, including blocked driveways and abandoned cars, led the agency to change its enforcement approach.

The agency attributed the projected $17 million deficit to wage increases. That’s because before labor negotiations ending in May, Muni had expected to save $14 million through in concessions from unions. After an amicable resolution that eliminated those savings, the city agreed to an additional $3 million in cost-of-living adjustments over the next two years.

How is the transit agency expecting to bridge the $17 million gap?

The total is, in theory, $18.2 million, enough for a balanced budget. The Board of Supervisors has until Aug. 1 to accept or reject the transit agency’s final budget as part of the city’s overall budget for the fiscal year.