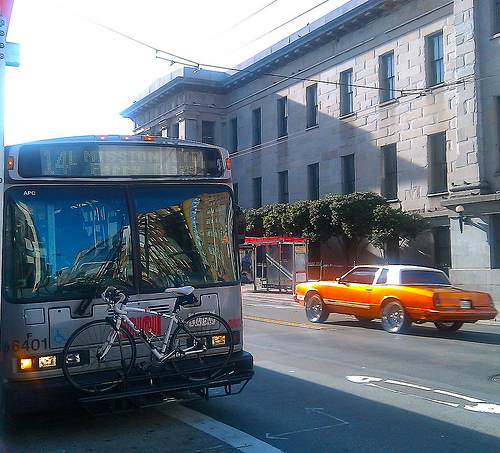 The 14-Mission but route and others could be capturing images of vehicles in transit-only lanes. Photo by Jerold Chinn/SF Public Press

Drivers who think they will not get caught driving in a transit-only lanes in San Francisco might want to avoid driving or parking in front of a Muni bus.

The city’s Municipal Transportation Agency reports that its agents wrote 3,052 citations in 2011 to drivers who travelled in dedicated bus lanes in the Financial District and Chinatown thanks in part to cameras mounted on 30 Muni buses. The year before, agents wrote 2,102 citations.

Since it worked so well for two years, Muni plans to add 300 more cameras in the summer of next. The goal is to eventually have them on the entire 1,000-plus bus fleet.

John Haley, director of Muni operations, said the pilot program, launched in 2008, was a success. The cameras, which are placed forward-facing on Muni buses, images cars either parking or driving in transit-only lanes. Two parking control officers review the footage to identify license plates and write the citations.

The transit agency plans to expand the transit-only lane network, separating the car and bus lanes on Mission and 16th streets, in 2014. That was one recommendation from the Transit Effectiveness Project, a plan to speed up some of Muni’s busiest transit corridors.

Citations written in the last three years (and revenue generated):