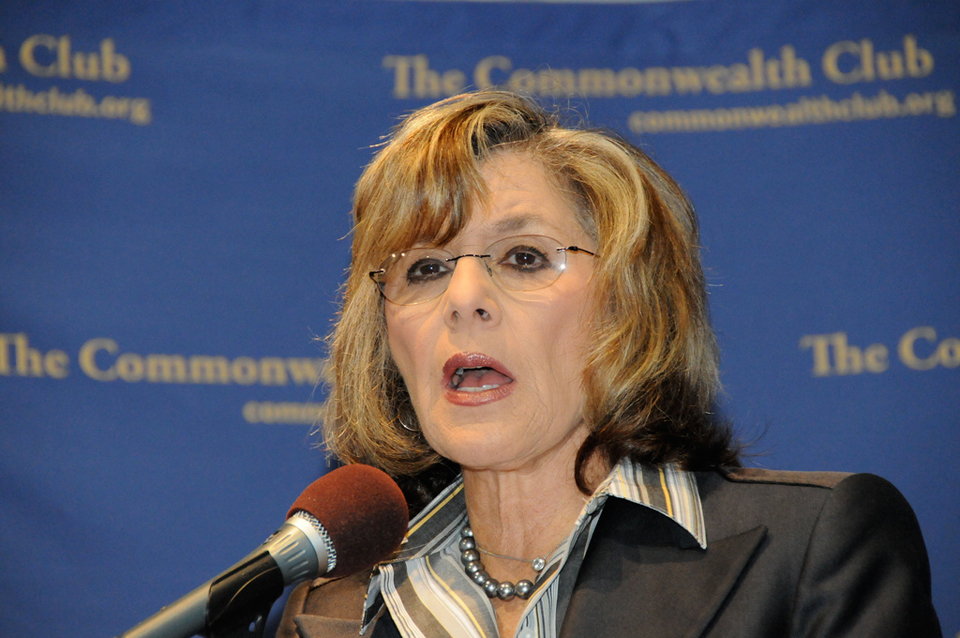 Senator Barbara Boxer addresses the crowd at the Commonwealth Club yesterday. Photo from the

The former Marin County supervisor railed against corporations for sending jobs overseas, vowing to eliminate their tax breaks and reward those who build a green economy at home. She is running a high-profile race against GOP opponent Carly Fiorina, a former Hewlett-Packard CEO.

“The world is going green and America must lead the way,” Boxer told the Commonwealth Club of California on Tuesday. “Green jobs must be made in America.”

Boxer said the green industry is under attack in California with Proposition 23, a November ballot initiative that puts the state’s greenhouse gas reduction laws on hold until unemployment drops to 5.5 percent. “It would stop us from moving forward on clean energy jobs in California,” she said. “Everybody is looking at California so our vote on Prop. 23 is very important.”

Fiorina supports Prop 23, calling the state’s greenhouse gas reduction law a jobs killer, given that it imposes new standards on industries. Her approach to economic growth is to cut taxes and reduce regulations on businesses and her energy platform includes development of renewable energy in concert with U.S.-produced nuclear, coal, and oil supplies.

In Washington, progress on environmental legislation has been similarly difficult. Boxer, who not once mentioned Fiorina, expressed resignation at the repeated, successful tactics by GOP senators to stymie passage of environmental legislation. As chair of the Senate Environment and Public Works Committee, Boxer said she sent two clean energy bills to the floor only to be filibustered out of existence.

Cap and trade legislation to stem climate change fell to the wayside in July when Senate Democrats failed to muster up enough votes. “The last time [it came up] the Republicans boycotted my committee,” Boxer said.

Still, Boxer countered an audience member’s claim that Democrats weren’t playing “hardball,” saying “we’re going to keep up the fight.” Boxer also said she wants to return to the days when a filibuster meant you had to “stand on your feet all night.”

As for California, Boxer said one of her main priorities is to pass legislation that would permanently protect the state’s coastline from oil drilling. The coastal economy generates $23 billion in economic output a year, and 390,000 jobs in the fishing, tourism, and recreational industries, “an economic resource too valuable to risk,” she said. Seeking to capitalize on the devastating impact of the BP oil spill in the Gulf, Boxer attributed the “drill, baby, drill” agenda to little more than “a catchy bumper sticker.”

Legislation she has cosponsored with fellow Sen. Diane Feinstein, D-Calif.,  would ban new offshore drilling along the entire West Coast. Currently, the moratorium is set to expire in 2017. Boxer said she has already secured the support of Washington and Oregon senators.

Boxer took a pass on the controversial San Francisco to Los Angeles high-speed rail project, saying little more than that she “totally respects the local community and their voices should be listened to.” She said she believes it still can be done but should “be placed in a place that works,” offering no specifics on where that would be.

She also announced her priority to boost public transit by offering more federal help to leverage the state dollars needed to move projects faster. She cited Los Angeles’ half-cent sales tax plan that builds 12 new public transit projects over the next 30 years as an example of a program that the feds should support.

Carly Fiorina provides a summary of her energy and environmental policies on her website.

The first Boxer-Fiorina debate will be held tonight at 7 p.m. at Saint Mary’s College in Moraga. Tune into KQED Public Radio and KTVU Channel 2 News.