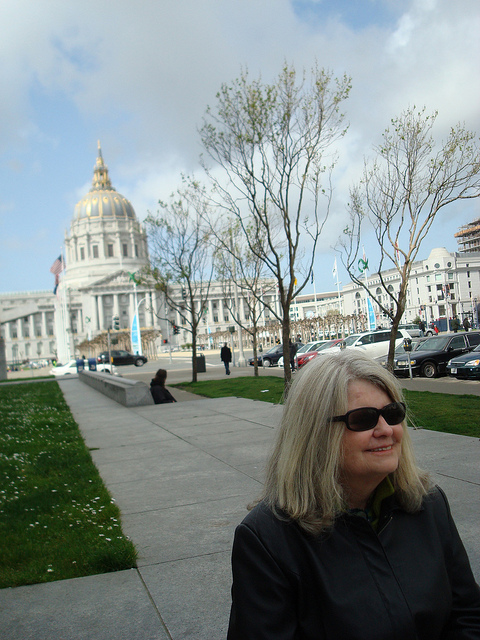 For San Francisco writer Yvonne Daley, the birth of the city’s Octavia Boulevard signified more than a swanky refurbishment of the streets to replace the neighborhood’s dilapidated Central Freeway. The thoroughfare that was created following the ruin of the freeway in the 1989 Loma Prieta earthquake, and its impact on the people who resided there, serves as the backdrop for her latest book.

The book, “Octavia Boulevard,” is designed as a memoir, and Daley moves between stories of her life and the people she befriends in the neighborhood, and intertwines snippets about some of the economic and political issues in the city at large — homelessness, drug abuse, housing woes, same-sex marriage — as it relates to those people.

Drawing from correspondences with her family in Rutland, Vermont, journal entries and in-person interviews, she writes of her internal conflicts that stemmed from observing the co-existence of decadence and abject poverty in her surroundings.

“Once the boulevard was built, I could see that it was a metaphor for all of these contrasts that I felt in the city,” said Daley. “It was beautiful, and certainly an improvement over that skanky double-decker freeway. Many of the building owners improved their buildings and they put the kaleidoscopes on the corners for the pedestrians’ entertainment and they put in the full-grown, mature palm trees, but there was still poverty everywhere.”

While such inequalities are inherent to many metropolitan areas around the world, Daley’s book emphasizes the irony and intensity of such disparities existing in San Francisco because of its lineage of progressive cultural and political movements.

She unfurls the narratives of the characters in Octavia Boulevard one by one, starting with the building owner, Jul, a verbose war veteran who recruits her to his building based on his fervent interest in discussing her past news articles on Supreme Court Chief Justice William Rehnquist and Russian author Aleksandr Solzhenitsyn, rather than her credit history.

Soon after she moves into her new apartment in 2003, she delves into narratives of her neighbors, Ann, Mae West, Noel, Glenn, Gordon and others. She tells the stories of the people who sleep on the sidewalk and in the crevices of the First Baptist Church on Waller Street in her neighborhood; and the men who sip coffee with her in the now-defunct Laguna Sidewalk Café on Page Street.

Daley, who spent 32 years as a journalist working for newspapers like the Rutland Herald and the Boston Globe, and who now teaches journalism at San Francisco State University, said that writing “Octavia Boulevard” was a means for her to circumvent the limitations of space and objectivity imposed by traditional journalistic writing.

“If you have been a journalist for a long period of time, you are always telling the story as it fits into this chunk of space, the story as your editor envisions it, the story that your publication will let you write. There’s always the story behind the story which is the real story,” said Daley.

As a result, her account of Octavia Boulevard and the characters of the neighborhood is told with undiluted passion.

In her book, she talks to Dennis Paul Jones, also called Stretch, a man whose life journey took him from a large house in Holland, Ohio, to basketball scholarships to drug addictions to jail sentences to sleeping in Octavia Boulevard and in single resident occupancy units.

“I wanted people also to see the invisible people around them, to make Stretch a human being,” said Daley.

Her life in Octavia Boulevard, however, abruptly ends in 2007 because of a residential conversion plan called tenancy-in-common. When she learns that her building owner, Jul, has plans to convert the apartment complex to a tenancy-in-common, she tries to convince him that the model will not benefit him or his tenants. She leaves for another apartment, also owned by Jul, in Noe Valley. He ultimately retracts his conversion plan a few months after her move because of the economic downturn.

In her book, Daley writes, “An apartment building is a microcosm, a small village. Our noises, smells or bad habits had ramifications that identified us as considerate or not, reliable or not.”

In many ways, Daley’s book is a story of relationships; relationships formed between people who come from backgrounds of staggering fortunes and misfortunes, and are united by occupying common spaces on Octavia Boulevard. It is the story of bonds formed between her and men who sit in cafes discussing Gnosticism, a cab driver who runs into a burning building to save lives and a single mother who works three jobs to raise an adopted child.

In the process of seeking these stories, she unearths their hidden quirks and talents.

In the book, Daley shares a poem that one of her Laguna Sidewalk Café companions, Guy, who she refers to as “Silent Guy,” wrote in his tattered notebook: “Sitting on a corner/ Cars go by/ People too/ Time moves in coffee cups, in cigarette ashes.”