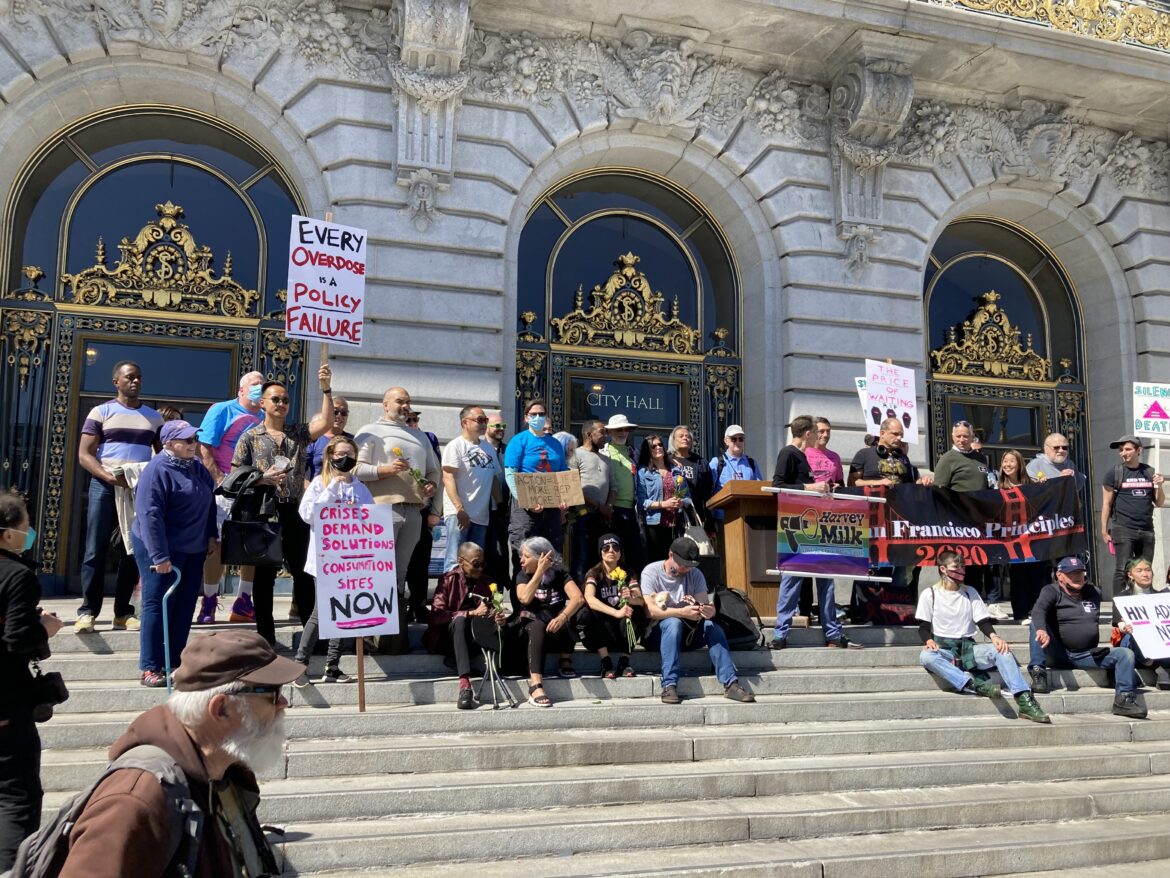 Activists and healthcare providers gather on the steps of San Francisco’s City Hall on March 21 during a die-in rally to demand renewed efforts in the public health fight against HIV.

Over the past several months, health care providers have been warning San Francisco officials that while the city was focused on fighting COVID-19, rates of HIV infection and related illnesses were creeping in the wrong direction.

From the very beginning, and throughout the HIV epidemic, which began in 1981, San Francisco led the way in prevention, care and treatment that came to be recognized around the world.

But that reputation is lagging, according to HIV activists and health care professionals in San Francisco, where more than 15,800 residents live with HIV. On March 21, dozens of HIV survivors, activists, politicians and health care providers held a die-in rally on the steps of City Hall to draw attention to the suffering among one of the city’s most vulnerable populations.

“We have people dying from HIV,” said a speaker named Junebug. “This is a reality. We can’t be silent. And sometimes you feel trapped and stigmatized. And even though it’s 2022, ignorance is so real. But how do we fight ignorance? Well, one way is we’re going to break the silence.”

“I’m a long-term survivor with HIV,” Rouppet said. “We’ve survived, now, two pandemics. And what we’re seeing happening with the recent epidemiological report is that San Francisco is losing the opportunity to be a trailblazer.”

In 2016, the city launched an initiative called Getting to Zero with these goals: zero new HIV infections, zero HIV deaths and zero HIV stigma by 2025. The strategy calls for three initiatives. The first is expanding the awareness about and use of pre-exposure prophylaxis — aka Prep — a daily pill that reduces the risk of HIV infection by 99%. The second is Rapid — the Rapid ART Program Initiative for HIV Diagnoses — which allows newly diagnosed HIV patients to quickly access antiretroviral therapy through several clinical hubs around the city. The third focuses on retention — making sure patients with unstable housing or mental health issues, or who are suffering from addiction, still regularly engage in HIV care and treatment.

The strategy was showing signs of success every year. By 2019, the Department of Public Health’s Annual HIV Epidemiology Report revealed that new HIV diagnoses had dropped to a record low of 166 — down 19% from the previous year. Nearly all the cases were linked to care within a month, and 78% were virally suppressed within six months after receiving a diagnosis.

This is important because high viral loads can lead a patient to progress to AIDS. Virological suppression means that the amount of HIV in the body is minimal enough to keep the immune system working and to prevent illness.

But that viral suppression trend began reversing course during the COVID-19 pandemic, said Dr. Monica Gandhi, director of Ward 86 at Zuckerberg San Francisco General Hospital, one of the oldest HIV clinics in the country.

The number of virus-related deaths had been consistently declining until last year when it rose to 160 from 137 the previous year. That reversal may be linked to the shelter-in-place order issued on March 16, 2020, Gandhi said. It meant that in-person care was converted to telephone medicine. And for patients who have substance use issues or are marginally housed, finding a quiet, private space to call a health care provider can be challenging.

Prior to the pandemic, 75% of city residents with HIV were virologically suppressed. That went down to 70% during the pandemic. And among the homeless population, it fell from 39% to 20%.

“We saw a lot of people being admitted to the hospital with opportunistic infections and who were quite ill because their viral loads were up and subsequently their T cells were down,” Gandhi said. “So, the slippage was very obvious.”

Higher viral loads can also lead to higher rates of HIV infection in the community. It remains to be seen whether the rate of infection has gone up because testing rates plummeted by nearly half during the pandemic.

“I will say, anecdotally, we’ve seen a lot of new diagnoses at Ward 86,” Gandhi said. “Many of these new diagnoses are in women and populations that we haven’t seen so much before. And so now, only with systematic testing, will we know the impact of transmission.”