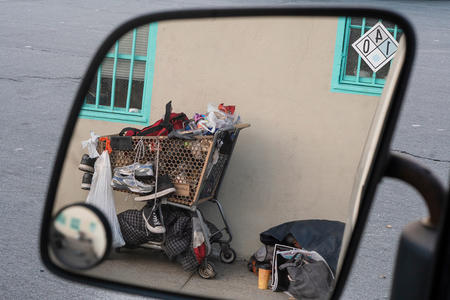 Bundled up inside his sleeping bag, a homeless man read a magazine outside a warehouse on Barneveld Avenue in the city's Bayview district days after the Point in Time Count in January 2019. Photo by Yesica Prado // San Francisco Public Press

Sylvie Sturm is a journalist and a recent graduate of San Francisco State University. For a research project, she compiled and analyzed hundreds of articles and columns published in the San Francisco Bay Area about homelessness, starting with the 2016 effort led by the San Francisco Chronicle to create an annual media blitz, the SF Homeless Project. Sturm coded each article for its framing and focus, and also interviewed reporters, advocates, government officials and editors about how media cover homelessness. She then created a video summary of her findings. Sturm spoke with the Public Press for its forthcoming podcast and radio show “Civic,” which will begin airing in mid-August. This interview has been edited for clarity and brevity.

Laura Wenus: About 15 percent of the stories you reviewed framed homelessness in terms of criminal activity, bad choices or bad behavior. And some of the feedback that I heard in the video that you produced, from a variety of people, is that the news tends to focus on criminality. Did you see any disconnect between what journalists and outside stakeholders perceived in coverage and what you actually found when you coded it and analyzed it in this more objective way? Because it doesn’t seem to me like the news necessarily always focuses on criminality, if it’s just 15 percent, according to your analysis.

Sylvie Sturm: Exactly. No, it doesn’t actually focus on criminality that often. Certain journalists get a lot of attention and a lot of flak for the way that they identify with housed people more than unhoused people. Certain journalists identify more with that perception, and then they’ll write an opinion column or they’ll frame their stories in that way. And that gets a lot of attention. So it isn’t the majority of journalists that write that way. But it is the loud minority, let’s say.

LW: One thing that threw me when you interviewed me for this series was that I was like, “Oh, yeah, I always try to get homeless people themselves to be heard in the story.” And then you basically pulled out the evidence and said, “Well, you know, I did see this story from Mission Local,* and this other one, where there’s nobody quoted who lives on the streets.” There’s my perception of my own work. And our work as journalists. So do you have a sense of how often it actually happened? Did a majority of the stories that you analyzed quote homeless people?

SS: Not at all, not at all. Those that do quote homeless people, they use their individual personal information. That’s how their quotes are used: to tell their story, as opposed to getting the opinion of the homeless person about what they think the solutions should be.

LW: According to your analysis, focusing on the tragic stories, the failures of government, the failures of whoever else is involved, the bad choices of stakeholders — what comes out of that?

SS: When we focus on the negative — the NIMBYism, the infighting between officials and advocates — what we’re not talking about is cause. And that is not being discussed enough. If you discuss the causes, then you can naturally lead to solutions.

LW: You wrote that 7 percent of the stories you looked at reference the causes of homelessness. 7 percent is nothing. And more than 45 percent of stories focused on solutions. How are we as journalists doing this? How are we trying to get at the solutions when we don’t even report on the causes?

SS: Because we’re following the lead from governments and other stakeholders. The Tipping Point Foundation just announced that they’re going to buy up and create 1,100 new housing units throughout the city, which is a solution. Sounds great. Doesn’t talk about the cause. Doesn’t talk about the lack of housing. How’d that happen? Do you know what I mean?

LW: It is really interesting that we feel this pressure to come up with solutions. I think that both journalists and government officials are responding to that pressure of “We want answers, we want a solution. We need to fix this now. How is this so hard?” And it’s struck me that so little of the work is being done on, “why are people here?” Did you come across any research? Any good answers to that question? Why are people living on the streets?

SS: One overarching theme has been the economic issue, you know, just people coming up against financial barriers, because of the lack of housing, the skyrocketing price of rentals. And it’s completely linked to the boom in Silicon Valley, the tech boom. So that is pretty much the fallback for everybody in terms of what the cause is.

Even when I spoke to a couple of reporters, one of the questions I had for them was: Have you ever experienced homelessness? And only one reporter said yes. She recognized that when she was couch-surfing at her father-in-law’s place for three months, and also living in a car, she recognized that that is homelessness. Two other reporters that I spoke to did the same thing back in their youth: lived in their car, lived in a garage. But “Oh, no, no, I was never homeless.” So there they are, identifying with housed people. Because to them, the look of homelessness is an extreme, and certainly not them.

LW: It can be hard to overcome this ingrained image of “this is what homelessness is and looks like.” And “this” is what we want to address. So it sort of limits our solutions, in a way, if we have one idea of what the problem actually looks like.

SS: Exactly. The other problem with reporting on homelessness is that the media tends to take the government’s word on everything. When a press release is issued, when the press conference is given, what is said, officially, is true. I’ve spoken to homeless advocates who are frustrated with that. They don’t want to be put in the position of being the foil the way that they are all the time. But they also wish that there was a little bit more research done before the media reports on everything that the government says as-is.

LW: I think that there’s a little bit of a reflexive tendency to assume that government information is more reliable than advocate information. I think somebody says this in your video: There’s an assumption that an advocate might have an ax to grind or an agenda to promote, more so than a government official. Which is on its face not necessarily true.

SS: We all know that politics is partially about votes and about the perception of the politician doing well and the city doing well. And that’s not to say that the government isn’t working very, very hard to do what it can to solve this problem and to help people who are unhoused. But to take everything that they say at their word? I mean, we are reporters, we are journalists, we should do a little bit of legwork.

See coverage of homelessness and housing from the Public Press:

Counting the City’s Homeless: A First-Hand Account From the Streets