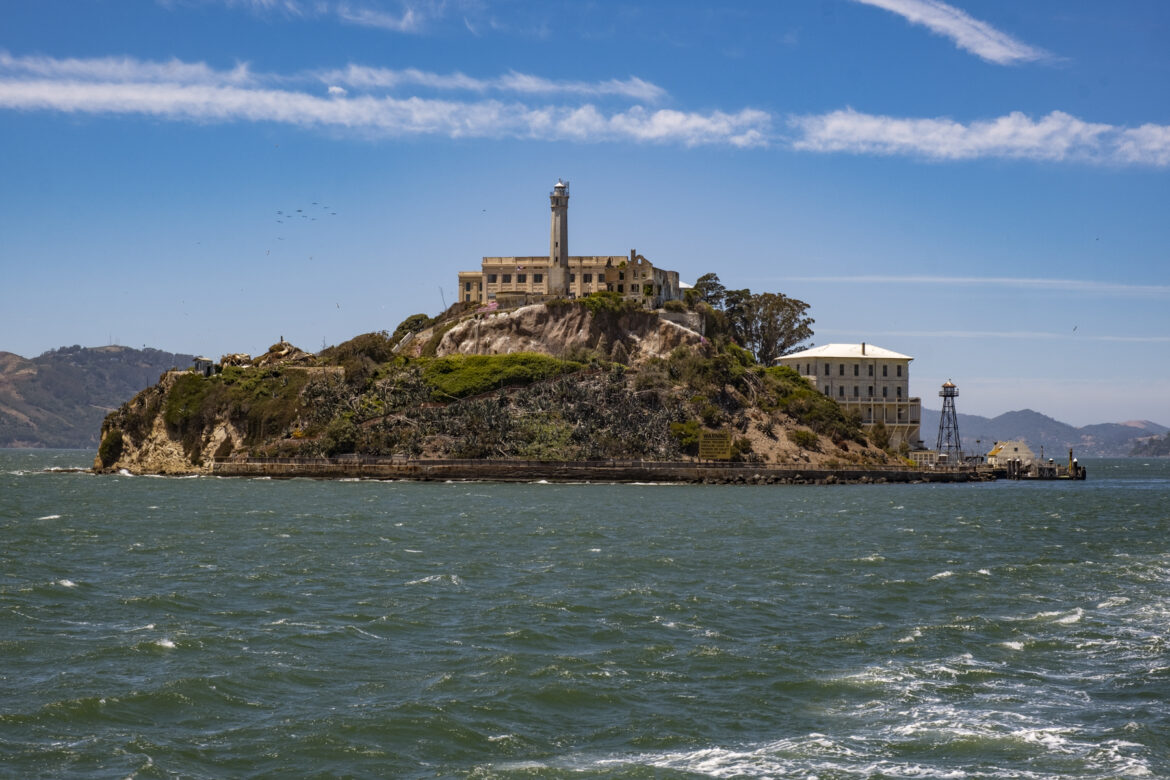 Alcatraz’s natural features include rock pools and colonies of seabirds such as western gulls, cormorants and egrets. The 12-acre island’s structures include the oldest operating lighthouse on the West Coast, a decommissioned military outpost and the abandoned federal prison. In 1850, President Millard Fillmore signed an executive order to turn Alcatraz into a military fortress. It served as a military prison from 1857 to 1933, during which it housed prisoners of war, including Native Americans from American-Indian Wars.

As California reopens to tourism, Alcatraz is once again drawing visitors from around the world and featuring exhibits celebrating a broader range of perspectives than previously represented on the island.

The once faded letters look bright and new after being touched up in November 2019 by the 1969-71 occupiers or their descendants for an extensive 50th anniversary commemoration. COVID-19 interrupted plans for a series of lectures, exhibitions and events to mark the historic occupation. Now, with most pandemic restrictions lifted, the commemoration is again under way.

And in a dramatic, if delayed, response to the occupation, the National Park Service is contemplating the installation of a permanent Native American cultural center on Alcatraz in collaboration with a group that formed with that as one of its key objectives more than 50 years ago.

Most tourists come to see the former federal prison with its lurid stories of infamous criminals such as Al Capone and the Birdman, and dramatic attempted escapes from “The Rock.” Until recently, many who visited the cell house on top of the island missed the small exhibit on the occupation, which was tucked away in an old ammunition vault in the dockside remnants of a Civil War era fort.

For the occupation anniversary, the Golden Gate National Recreation Area with the help of the original occupiers, indigenous rights activists, photojournalists and historians created a much larger exhibition on the north end of the island — “Red Power on Alcatraz Perspectives: 50 Years Later” — in the New Industries Building, where federal prisoners once did laundry for the U.S. Navy.

Explore images by Yesica Prado by clicking through the viewer above, or see the entire photo essay here on a single page.

A place of isolation

Alcatraz has always been a harsh place. When Europeans first arrived, they encountered it as a domed rock covered in birds. The first Spanish explorers are believed to have named it “Isla de Los Alcatraces” or “Pelican Island.” It is unclear how native people used the island. They might have traveled there in tule reed boats to collect bird eggs and perhaps fish around its craggy edge. Alcatraz lacks a natural freshwater source, so it is unlikely anyone established a permanent village on the windswept rock. According to some oral traditions, people who violated tribal laws could be taken to the island as punishment.

Today, the National Park Service maintains the historic buildings and protects Alcatraz as a wildlife refuge. The island is a breeding and nesting ground for several bird species that return year after year. The most common are the fearless western gulls, which nest their young just inches from public walkways.

Alcatraz saw dramatic avian population shifts while humans stayed away during the COVID-19 pandemic. A peregrine falcon family took up a perch in the lighthouse tower and devastated the entire colony of pigeons that once flocked around the ferry dock. Crows seem to have abandoned the island, perhaps bothered by the falcons. The western gulls seem unfazed, too big for the falcons to eat and once again happy to dive bomb and snatch food from unwary tourists.

When the Spanish colonized the Bay Area and forced native people into the mission system, some tried to hide on Alcatraz. In 1854, the U.S. government built a fort on the island and used dynamite to create steep cliff sides. By the end of the Civil War era, it was the most powerfully positioned fortress on the West Coast, but it was mainly used as a military stockade and civilian prison for Confederate sympathizers, and also to hold Native American prisoners.

Morning Star Gali, a member of the Ajumawi band of the Pit River Tribe and a recent Open Society Institute Racial Equity fellow, has studied the history of Native American incarceration extensively and received academic honors for her work. She said that the National Park Service has acknowledged that legacy on Alcatraz.

“There’s a little bit that is mentioned and discussed in terms of our Hopi relatives, and how they were imprisoned on Alcatraz Island for refusing to send their children to boarding school back in the late 1800s,” she said.

Listen to the rest of our interview with Morning Star Gali on “Civic.”

Members of other tribes were also taken to Alcatraz in the 19th century: “It still hits too close to home to talk about the history of California Indian leaders that were being removed from Round Valley reservation when our tribal peoples were forced to march there,” she said, referring to a spot in Mendocino County where the U.S. government forced many tribes to relocate, “and how California Indian leaders were sent to Alcatraz Island and imprisoned there on the island.”

Gali is one of the organizers of the sunrise ceremony held on Alcatraz every Thanksgiving. Her father, Isidro Gali, Jr., used to take her to the ceremony as a child.

“It was during that occupation time of 1969 to 1971, that my father was incarcerated at San Quentin State Penitentiary,” where he served seven years, she said.

The elder Gali, who was involved with the Third World Liberation Front and the fight to establish ethnic studies programs at San Francisco State University and San Mateo College, would later return to prison to help others as a spiritual adviser, his daughter said.

“In 1995, he was hired on as the first full-time spiritual adviser for the state of California for the Department of Corrections,” dedicated to serving as a chaplain for Native American inmates, she said.

Government efforts to relocate Native Americans persisted in the 20th century. In 1953 Congress passed the Termination Policy, ostensibly to address poverty, which ended federal recognition of many tribes and called for their lands to be sold. Then in 1956, the Relocation Act encouraged Native Americans to relocate to cities to find work. Many people displaced from tribal land came to the Bay Area, where they joined forces with the growing civil rights and anti-war movements and created cultural centers in San Francisco and Oakland.

Gali said the number of native people left without a cultural homeland is significant: “There are 109 tribes within California that have been afforded federal recognition, but there are over 55 tribes throughout California that are considered non-federally recognized, and so we have tribes that have been terminated,” she said. “It really is heartbreaking,”

Matters came to a head in San Francisco when the local tribal education and resource center burned in the fall of 1969. While Alcatraz was hardly the ideal place for a new community resource center, it is a highly visible location, and organizers said they had legal claim for taking the island, which had been considered an eyesore by San Franciscans for decades.

The occupation began with about 80 indigenous people landing on Alcatraz to occupy the abandoned federal prison on Nov. 20, 1969.

“It wasn’t the local tribes, the Ohlone and Miwok, who occupied Alcatraz Island in 1969,” said Alcatraz Ranger Steve Cote. “It was mostly college students whose families or themselves had been relocated out here from reservations all over the country. And so, you had in the first group about 20 different tribes from across the United States represented. And eventually they began to call themselves the ‘Indians of all Tribes.’”

The occupiers said they were exercising a right established in the Fort Laramie Treaty of 1868, which said unused federal lands could be claimed by Native Americans. They hoped to turn Alcatraz into an education and cultural center.

It was not the first effort to occupy the rock. Belva Cottier and her husband, Richard McKensie, led a brief, symbolic occupation of the island on March 9, 1964. Cottier later inspired a group of Bay Area college students to pursue a more formal occupation, which resulted in the 1969 action led by Richard Oakes.

The occupation would grow to include hundreds of men, women and children. They set up kitchens, a medical clinic, a school and even a radio station. The group eventually suffered leadership turmoil, and Oakes and his wife left the island after their 13-year-old daughter died after falling from a stairwell in the cell house. The U.S. Coast Guard cut off access to a water barge, leaving no water to fight fires that destroyed several historic buildings, including the lighthouse and warden’s house. The initially positive press coverage of the occupation turned against the activists. Only 15 men, women and children lived on the island when federal marshals moved in to remove the remaining activists on June 11, 1971.

Despite its muted demise, the occupation influenced real change. Following the attention drawn to Alcatraz, President Richard Nixon ended the Termination Policy and signed 22 other pieces of legislation that expanded some Native American sovereignty that had been curtailed in the 1950s.

For most visitors to Alcatraz, the focus remains on the top of the island and the cell house tour with its stories of prohibition era gangsters and the three prisoners who escaped their cells and the island in a boat made of raincoats to disappear into the bay, feeding endless speculation about their fate. But by dedicating prominent space for exploring the history of the 1969-71 occupation, the park service could shift visitors’ awareness and understanding of the island’s complex history.

Learn about visiting the former federal prison today from this “Finch Files” podcast by Peter Finch. Learn more about the “Finch Files.”

The “Red Power” exhibition in the New Industries Building includes a lecture and performance space for events scheduled for the second Saturday of every month. It will remain open through 2021.

Cote said there is a chance the building could fulfill part of the dream of the original occupiers: “One of the main goals of the occupiers was to build a Native American cultural center, and a Native American university out here on Alcatraz Island,” he said. “Now, that never happened. But we are actually planning now a cultural center here on Alcatraz Island with the Indians of All Tribes.”

“It’s very early in the planning stages,” he said. “We don’t know what it’s going to look like yet. But this is a very exciting moment, that we’d be able to help them achieve that goal 50 years later.”

For Morning Star Gali and many Native Americans, the island becomes a place of pilgrimage every Thanksgiving, when the tourists are gone and only the birds and the sounds of sacred drums break the cold and chill before sunrise.

“I bring my four children there every year, just as I was brought as a young child,” she said. Gali said she enjoys discussing the history of Alcatraz with her children and noted that her 7-year-old daughter has a particular affinity for the island.

“She says that Alcatraz and Hawaii are her two favorite places to travel to,” Gali said. “But she does also know the history,” of relatives and family friends being occupiers, and of her grandparents participating in later activism for Native American rights.

“Alcatraz was the spark that lit the fire of indigenous resistance,” she said. “And so, I do hope that people, you know, learn more about that history and learn about how rich it is.”