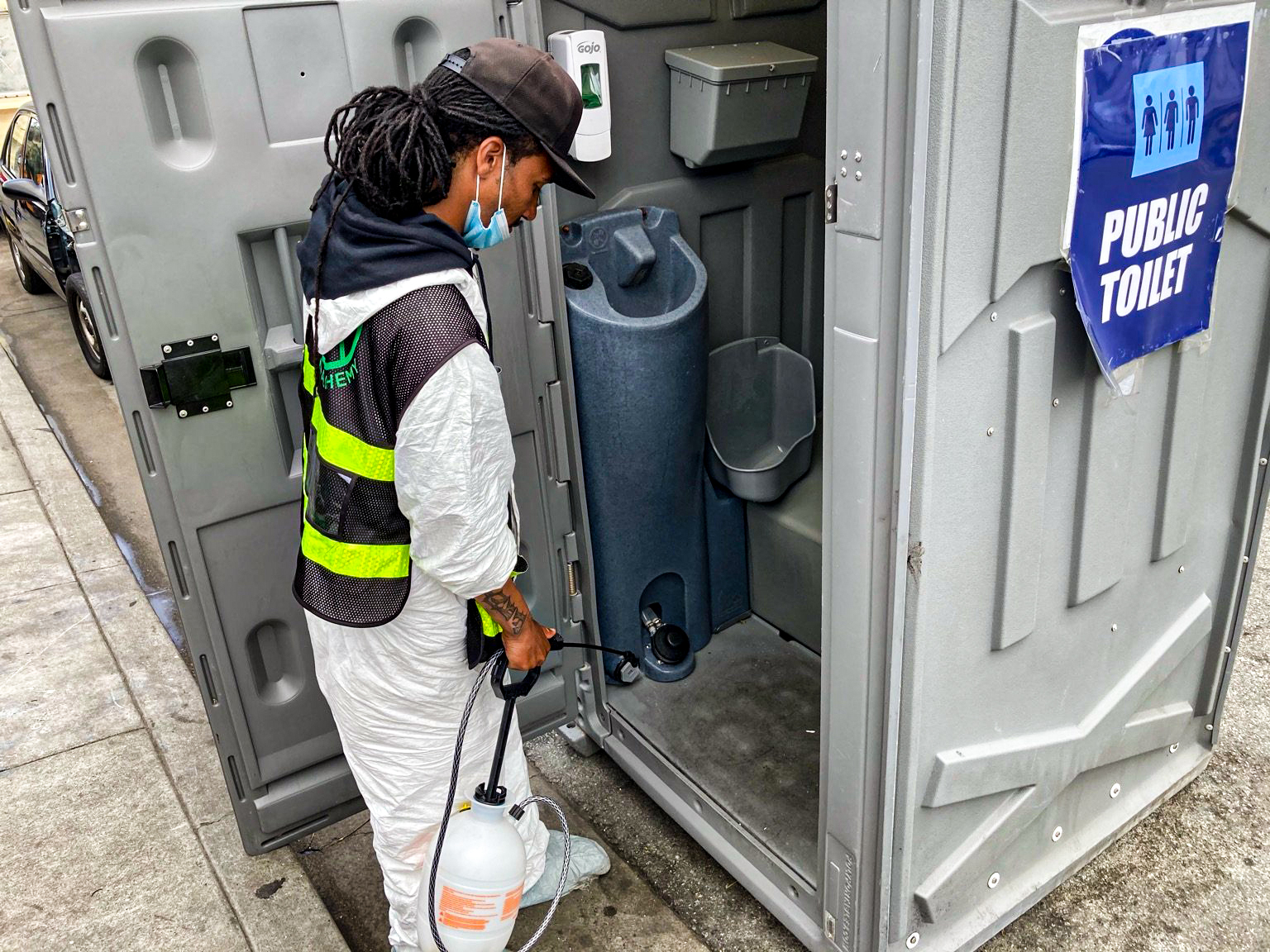 More than four in every 10 emergency hygiene facilities the city has set up during the COVID-19 pandemic to serve homeless people lack at least one element essential to handwashing, the Public Press found.

A third of the 55 toilets San Francisco provided for homeless residents were closed during posted operating hours or were out of soap, water or paper towels at the time of visits by reporters over the last two weeks. More than half of a separate set of 24 handwashing stations were missing an essential handwashing element, were unusable or could not be found.

The results of the follow-up survey — conducted two months after a Public Press investigation revealed that many of the city’s emergency handwashing stations were broken, empty or missing — suggest large numbers of homeless people still lack access to adequate sanitation.

Details on each facility can be found in the map above. Clicking the icon in the upper left reveals the legend showing what each color indicates. Map by Noah Arroyo and Brian Howey

Other findings of the investigation:

“The failure to provide for and prioritize basic hygiene for residents in these neighborhoods is dangerous and shameful,” said Supervisor Matt Haney, whose district includes the Tenderloin and South of Market neighborhoods. In a Twitter direct message, he called the neighborhoods “terribly underserved.”

The number of homeless tents in the Tenderloin has nearly quadrupled since the coronavirus pandemic shut down much of the city, drawing national attention and prompting the UC Hastings law school, located in the neighborhood, to sue the city. The lawsuit seeks to force the city to clean the Tenderloin’s streets of feces and tents, find housing for the neighborhood’s homeless and stop rampant drug dealing in the area.

High usage rates in those neighborhoods was a “likely reason” that some stations were poorly stocked, Public Works spokeswoman Rachel Gordon said.

“We’ll make sure we talk to the vendor to keep an eye on that because that’s part of their job,” Gordon said, referring to Urban Alchemy and Hunters Point Families, two nonprofit groups contracted by the city to monitor the Pit stops and handwashing stations. “That’s something they should be checking regularly,” she said.

Attendants from the two nonprofits watch and maintain all of the city’s Pit stops, many of which are open 24 hours. United Site Services, the company that owns the stations and resupplies them, services the stations several times daily, according to Gordon and several Pit stop attendants. The company also services the handwashing stations, but they are not attended, a possible explanation for the empty and broken stations, Gordon said. She added that Public Works was considering using the department’s own water trucks to refill the stations in order to ensure they remained stocked.

In addition, there may be a lag between the time attendants request more supplies and when they arrive, Gordon said. Two Pit stop attendants in the Tenderloin and South of Market neighborhoods who refused to share their names because their supervisors had told them they would be fired if they spoke to the press confirmed that they sometimes had to wait hours for fresh toilet paper or soap.

United Site Services “works diligently to provide the services contracted by our customers, but we don’t comment on the details of any particular contract,” Nina Jankowski, a company representative , wrote in an email. “The service frequency in the contract dictates our schedule for cleaning and restocking units.”

The federal Centers for Disease Control and Prevention lists regular and thorough handwashing as one of the most important factors in slowing the spread of COVID-19. Often citing local and national public health guidelines on handwashing, Haney has long been vocal about the need to add more hygiene facilities for the city’s homeless population.

Since unhoused people often rely on restaurants to provide public restrooms, many have gone without regular bathroom access since shelter-in-place orders shut most of the city’s businesses, he said. In an April 20 letter to city leaders, Haney urged swift action to improve conditions in the Tenderloin, including providing more public bathrooms and handwashing stations for the neighborhood’s unhoused population.

“This has been a fight since day one to get more of these out there,” Haney said in a phone interview. “I’m still pushing for more.”

Public Works has searched “up and down the state” to find more portable toilets in recent weeks, Gordon said, adding that availability is “less of an issue now than before.”

In a May 1 presentation to supervisors, acting Director of Public Works Alaric Degrafinried said the Pit stops the city had provided were costing the city more than $342,000 per week, not including the wages of Public Works employees involved in the program. To add more Pit stops, the department would need to add staff to help install and maintain them, Degrafinried said.

Frustrated by what he called a reactive response by the city, Haney authored an emergency ordinance, which the supervisors passed unanimously May 5, that requires the city to meet United Nations standards calling for one toilet for every 50 people.

That day, Mayor London Breed issued a press release saying that the city had 136 staffed public toilets at 62 locations, including park bathrooms, putting its numbers within UN standards. However, the Public Press could not locate a list or map of bathrooms that were open during the health emergency on the city’s Recreation and Park department website and they were not publicized as part of the city’s Pit stop program. A city representative today shared a link to the most current map of the city’s open public restrooms which included some — though not all — of the city’s open park restrooms. A link to the SF72 website was not included in the mayor’s press release and the map was not easily found by a simple web search for “bathrooms,” “restrooms,” “toilets” or “handwashing stations” in San Francisco.

This week, the city plans to add four more 24-hour Pit stops and increase availability at 10 of the existing Pit stops to 24 hours per day, Gordon said. She added that two attendants must watch the toilets at night for safety reasons, which may make adding more 24-hour toilets a budget issue.

“There could be more, depending on funding availability,” she said.

Haney is happy that the city has begun to deploy more bathrooms. Pit stops are “a start, but woefully inadequate,” he said, adding that housing the homeless in hotel rooms is the only way to ensure the protection of the city’s homeless. “If bathrooms are all they’re offering, that’s not enough.”

Mixed feelings on the ground

Harold Lopez, a 61-year-old Native American man with a wispy goatee and fading tattoos, sleeps under the stairs of a pedestrian walkway on Cesar Chavez Street. Though his age makes him eligible for a hotel room during the crisis, Lopez said he has not been offered one by city outreach workers. Instead, he relies on the Pit stop to keep clean.

“They do a really good job,” he said, referring to the Pit stop attendants. “I use it every day.” The next thing he and his neighbors hoped for was a shower, he said, adding that he intended to meet with Breed soon to tell her himself.

In the northern Mission District, Isaac Hernandez stood in front of his tent, hands streaked in grease and hunched over his bicycle as he tinkered with the derailleur, or gear-shifter. The plastic Pit stop toilet reflected in the wheel spokes, turning them blue. He said he used the toilet at least three times each day.

“Finally, they did something good,” Hernandez said. “They could do better.”

The city had failed people like him by leaving them to sleep outside during the pandemic and the Pit stops, while welcome, seemed like a hollow gesture, he said.  “When I see a lot of buildings with empty offices, I don’t believe the city’s doing enough.”