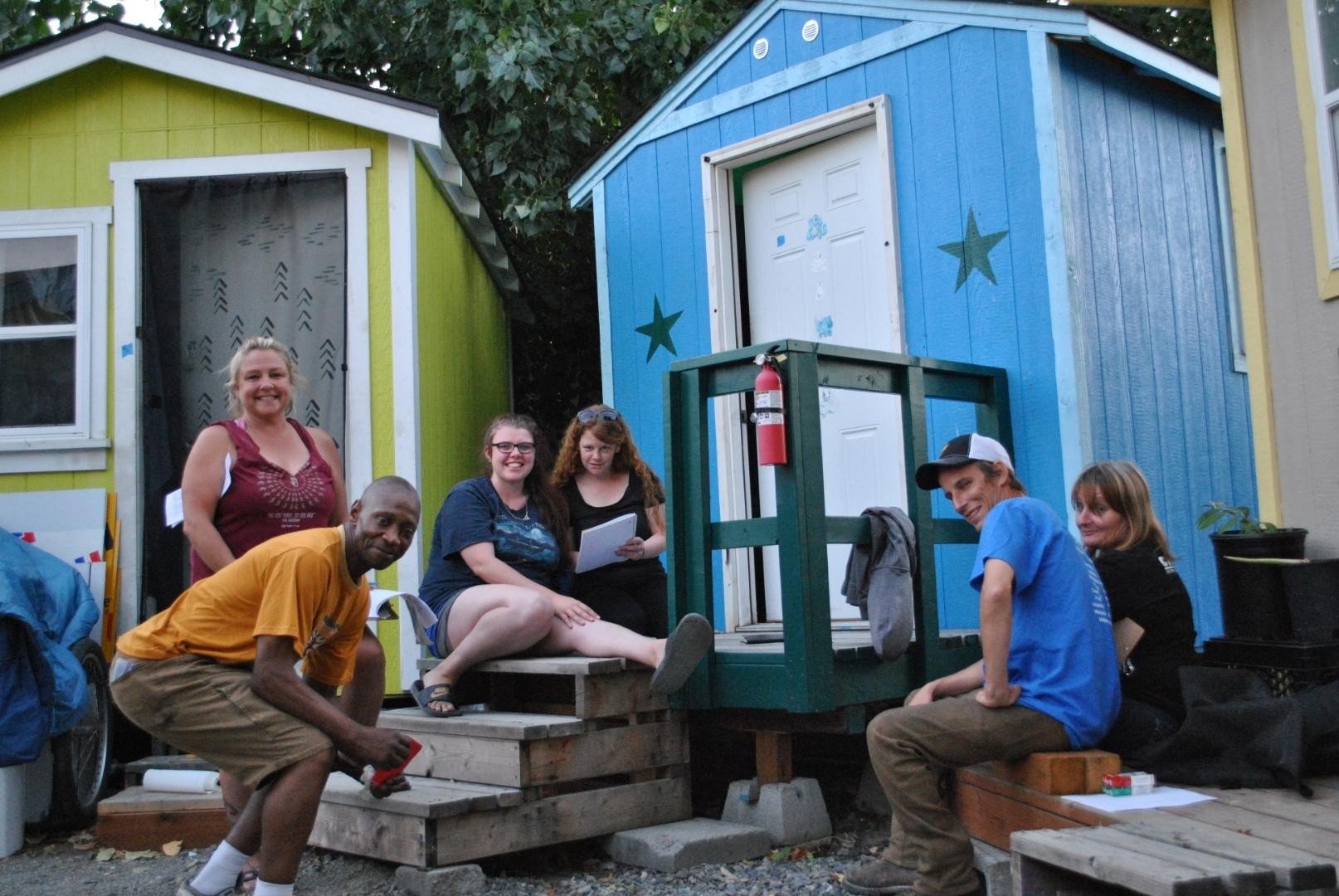 While San Francisco city leaders continue to resist long-term homeless encampments, another city 800 miles to the north is taking the opposite approach.

San Francisco has approved temporary encampments to slow the spread of COVID-19. But in Seattle, a half-decade experiment with regulated sites has proved so much more successful at getting people off the streets than other solutions that officials recently voted to expand it fourfold.

Seattle has set up nine “villages” of tiny houses, provided case managers on the premises and looked to the occupants themselves to help with daily operations. The results are impressive. Public data show that 37% of Seattle’s village clients moved on to permanent housing in 2019, compared with 23% from “enhanced shelters” like navigation centers and 4% from basic emergency shelters.

“The people who the city might think are service resistant, the villages appeal to them,” said Andrew Constantino, site coordinator at Georgetown Village, one of the tiny-house sites. “It’s because it doesn’t treat you like a child. It’s not an institution and it doesn’t infantilize you.”

In all, 626 people have exited the villages into permanent homes since the first sites opened in 2016, said Josh Castle, advocacy and community engagement director at the Low Income Housing Institute, which manages the sites. That figure includes people who took buses out of town to live with loved ones.

The model has met criticism from neighbors concerned the camps would increase crime, as well as homeless activists over the requirements they place on clients.

Others like Chris McDaniel — 55, and a client who has lived in a Seattle encampment for years — call them “the future of the way to deal with homelessness.”

After four years of evolving their approach, the Institute’s staff have learned some crucial lessons that officials elsewhere could draw on when considering legalizing tent camps.

Today, staff have replaced all tents with tiny homes because they provide superior living conditions. Each is insulated and features a bed, closet, light and an electrical outlet. Even more important, homes with doors provide much more security than tents.

The difference is profound, said Theresa Hohman, program manager at the Institute. She recalled a line from a poem that a woman had written after moving into a tiny home: “With the threat of rape on the flap of my tent, there was no sleep.”

McDaniel put it another way: “You have dignity.”

“You’ve got a place you can shut the door, lock the door, and just relax,” McDaniel said. “You don’t have to carry all your possessions around with you, so that wherever you go, people don’t look at you and go, ‘There’s a homeless guy.’”

Gaining control over his personal space helped him “phase back into living,” he said, adjusting the behavior and reflexes he had developed on the streets where the threats of assault and theft loomed.

“When I first got in here, it took me a couple of weeks to just sleep at night without having one eye open, because you’ve got to always be aware,” McDaniel said. “Can’t let yourself sleep too much when you’re outside.”

Staff helped McDaniel sign up for Social Security Disability Insurance, in light of a medical condition that makes him unable to work. He is saving money and hunting for a Seattle apartment that he can afford.

The occupants at all villages perform chores like picking up garbage or cleaning the kitchens, requirements that foster a sense of community and responsibility, Castle said. Clients take on larger roles at some sites, reducing operating expenses. That might include bookkeeping or arbitrating disputes as the “village organizer.”

“You’re like the mayor,” said McDaniel, who has held the position. “If there’s an argument over the laundry room, you settle it.” The village organizer also manages the shower schedule and makes sure supplies are well stocked and passed out equitably.

At the sites that are more client-managed, they alternate security shifts that involve checking IDs and signing people in and out at the front desk. Registered sex offenders cannot enter.

“Some people would make it sound like you can’t have the inmates running the asylum,” Constantino said. “But at the same time, these are the people with a vested interest in keeping the place safe.”

Institute staff have found that about 40 to 50 adults at each of those villages is the “sweet spot,” Constantino said. That’s enough spare hands to handle problems as they arise, while maintaining social cohesion — because everyone knows each other.

“There’s a critical mass where the village just kind of operates itself,” he said.

One reason the camps have received support from residents and politicians is that they have been established in multiple neighborhoods, rather than concentrating in one area, Constantino said. “It feels like the city as a whole is sort of sharing the burden.”

Staff and clients from each site meet monthly with members of the surrounding community, as well as representatives from the city and nearby businesses. They discuss the sites’ occupancy levels, problems that have surfaced and whether anyone attained permanent housing. In recent months, the sites’ responses to COVID-19 have been a key topic.

“Got the results back from the Corona virus screenings/tests. All negative!” read the May meeting minutes for Georgetown Village. “Public Health coming every week to give advice and bringing extra hand sanitizers and masks.”

Each tiny home costs between $2,000 and $3,000 to build. Institute staff are unsure of the average cost because so many homes are donated by “churches, student groups, carpenter apprentice groups” and tribes, Castle said.

Sites can be placed on publicly or privately owned land, and the city works with the Institute to find new suitable locations. Sites on public land either pay no rent or a nominal fee. After years practicing site setup, the team has “gotten it down to a science,” Constantino said. For one camp, they built 30 houses in a single day.

That level of efficiency enabled them to satisfy Mayor Jenny Durkan’s March request to quickly establish additional sites in order to slow the spread of COVID-19.

“They were asking, can we open three villages in three weeks?” Hohman said. “At that time, our record was one village in a month, and so it was a really big undertaking.” The team got it done in about six weeks, she said.

One location was a preexisting village, to which they added 20 houses. The second was a former psychiatric clinic that staff converted into a shelter, adding restrooms, showers, furniture, community rooms for reading and computer use, a ping-pong table, and a commercial kitchen where staff could prepare meals.

Seattle agreed to legalize tent camps in response to a worsening homelessness crisis. Annual counts found the number of people sleeping outside in the city surged 41 percent in two years to 2,813 in 2015.

That year, Mayor Ed Murray proposed sanctioning encampments to help people off the streets, and the city council unanimously approved. The sites would close in 2020 if the council did not intervene. After data showed the villages had high housing-placement rates, the council voted this February to keep the existing sites and establish a total of 40 citywide — with no sunset date.

Some members of the public have complained the camps cause nearby crime rates to increase. A 2018 Seattle Times investigation found that, in the first year of Licton Springs Village’s operation, 911 calls in the immediate vicinity rose 62% over the previous year. A later investigation by the UK Guardian, which looked at encampments in Seattle and other cities, was unable to find a clear connection between the camps and nearby crime rates, which fell near some and rose near others.

Longtime homeless activist Paul Boden, executive director of the Western Regional Advocacy Project, said governments should make it their top goal to help homeless people into permanent housing, and some types of sanctioned encampments serve that purpose. He criticized those that, like Seattle’s, require clients to meet with case managers.

“Mandatory case management makes an assessment about somebody before you’ve even met them,” Boden said. “Do we assume that people coming in to us are valuable? That they’re another piece of the puzzle and they bring something to this community? Or do we need to fix you?”

In San Francisco, politicians have long rebuffed efforts to establish tent camps, even as the city’s unsheltered homeless population has surpassed 4,300 people since 2013.

The pandemic shifted the political winds. By late April, both the Board of Supervisors and the San Francisco Unified School District board unanimously backed the policy approach, with some supervisors saying they would like the sites to remain in place after the COVID-19 threat had passed. By the third week of May — nearly two months into the local crisis — City Hall approved an encampment at Civic Center.

It is a far cry from what has developed in Seattle. Occupants live in tents, not tiny houses, and the city has plans to break it up by June 30, according to agreements that occupants signed upon entry and that the San Francisco Public Press obtained.

“What happens to the people who are there if it ends on that day?” said Kelley Cutler, human rights organizer at the Coalition on Homelessness. “They’re not showing a discharge plan here,” she said, referring to the agreements.

When asked why the sites were temporary, and where clients would go after their dissolution, city spokesman Jonathan Streeter said they were intended to satisfy “minimum health and safety standards for homeless people in settings where services like food, water, sanitation and healthcare can be more effectively provided during the shelter-in-place phase of the COVID-19 pandemic.”

“The expectation is that the sites will be returned to their former uses as conditions permit,” Streeter said, adding that city staff “continue to work with individuals in village sites and throughout the city on longer-term solutions.”