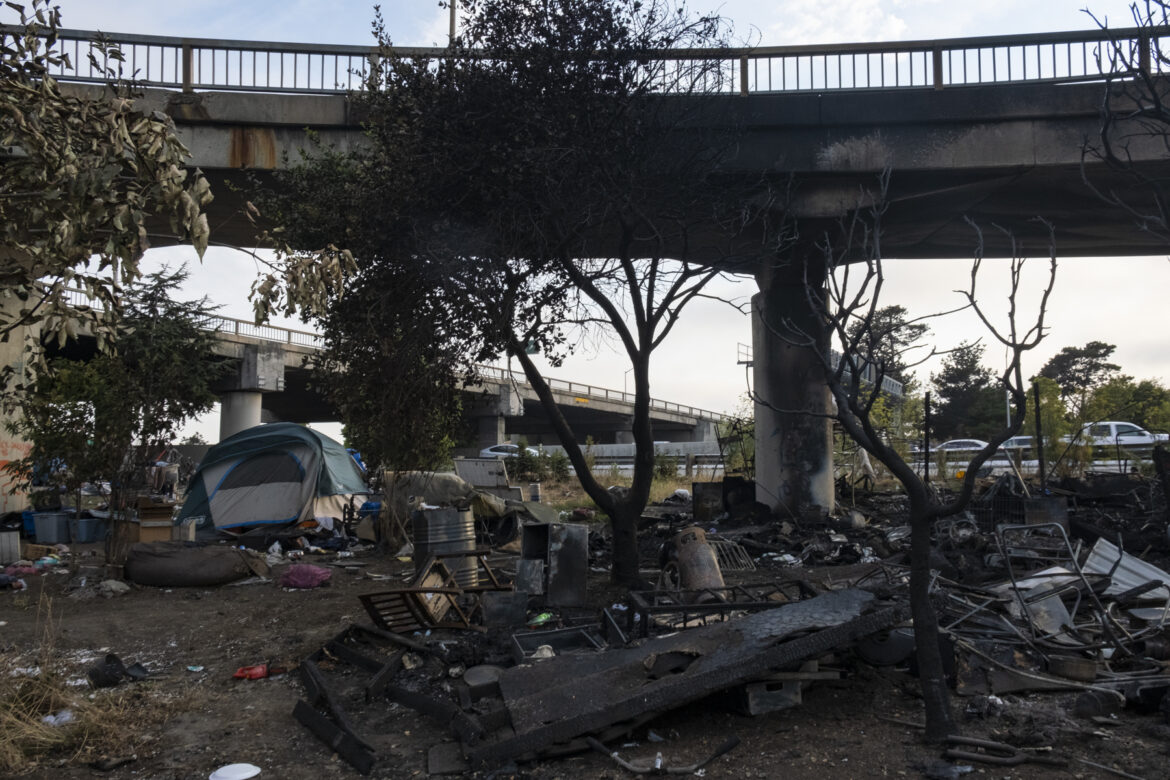 On July 24, 2021, a large tent fire set off multiple explosions of propane tanks at the “downstairs” Seabreeze camp, burning the occupant’s home and surrounding vegetation. There were no reported injuries and no other nearby tents caught fire. According to Berkeley Fire reports, there has only been one confirmed explosion at an encampment in the last three years. Camp residents said the incident was arson, but the fire report did not investigate the causes. “Additionally, Caltrans was requested to evaluate the overpass as well as take control of the property as the land was state responsibility,” stated the report.

Fires in encampments, tents and other makeshift shelters occurred more frequently in recent years, reporting from the San Francisco Public Press and Mission Local shows. But incident counts alone do not offer a clear explanation of what is happening on the street.

In late February, as temperatures dropped, a fire at a freeway overpass killed one woman and critically injured three people. KQED reported that the woman killed was survived by three children.

While people without shelter do use fire to keep warm, fire incidents don’t seem to be linked very closely to temperature.

“I kind of found less seasonal variation in them than I had expected,” said Mission Local data reporter Will Jarrett. “It’s used for cooking a lot and that kind of thing. So, I don’t think it’s necessarily entirely about heat, although that is obviously a big one.”

The reporters also found that clues about a fire’s origin or nature were only reflected in detailed fire department “narratives” that are not as readily available as information like time, date and location of a blaze. Even basic data needed to be pulled out of static documents to be analyzed.

“They would give us reports, like full PDF reports, when we asked for spreadsheets,” said Public Press data reporter Jenny Kwon. The data would be sent in rounds rather than all at once, “and sometimes not even within the date range that we requested.”

In some cases, the information recorded in the fire department’s database did not match the experience of its victim. Jarrett said one victim Mission Local spoke with said their tent had been set on fire from the outside while they were sleeping

“They had some burns, but they weren’t too badly hurt,” he said. “It could have been worse, but still pretty terrible. And then when we looked up the fire in the dataset, it was classified as a garbage fire, and there was no indication of injury or possessions that had been damaged.”

Using flames in or near tents carries risk, but it is a risk many people are willing to take.

“It’s really hard for these fires to cease if people don’t have the basic materials to actually make this safer, like be able to cook in a safer way, stay warm in a safer way,” said Yesica Prado, a multimedia journalist who has been covering homelessness for the Public Press. “We were seeing in the data, we saw that from 2019 to 2021, the fires is still kind of on the rise, you know. They haven’t really dropped down.”

Clearing encampments or forbidding people from using heat or light sources when outdoors is not likely to be effective, Kwon, who uses gender-neutral pronouns, said.

“It’s not, again, addressing the main reasons they’re starting fires, which is for survival purposes,” they said. “And it’s not actually advocating for the safety of the victims of these fires who are unhoused.”

Prado and Kwon have also investigated ways to address the problem of tent, encampment and other outdoor fires. A related complication is that fire victims who live on the street feel they are not given the same consideration and empathy as housed fire victims.

“I feel like there has been a lot of fires happening in California,” Prado said. “We have all these kinds of things set up to help fire victims, and right now, we just don’t have anything locally to help the people that are on the streets.”