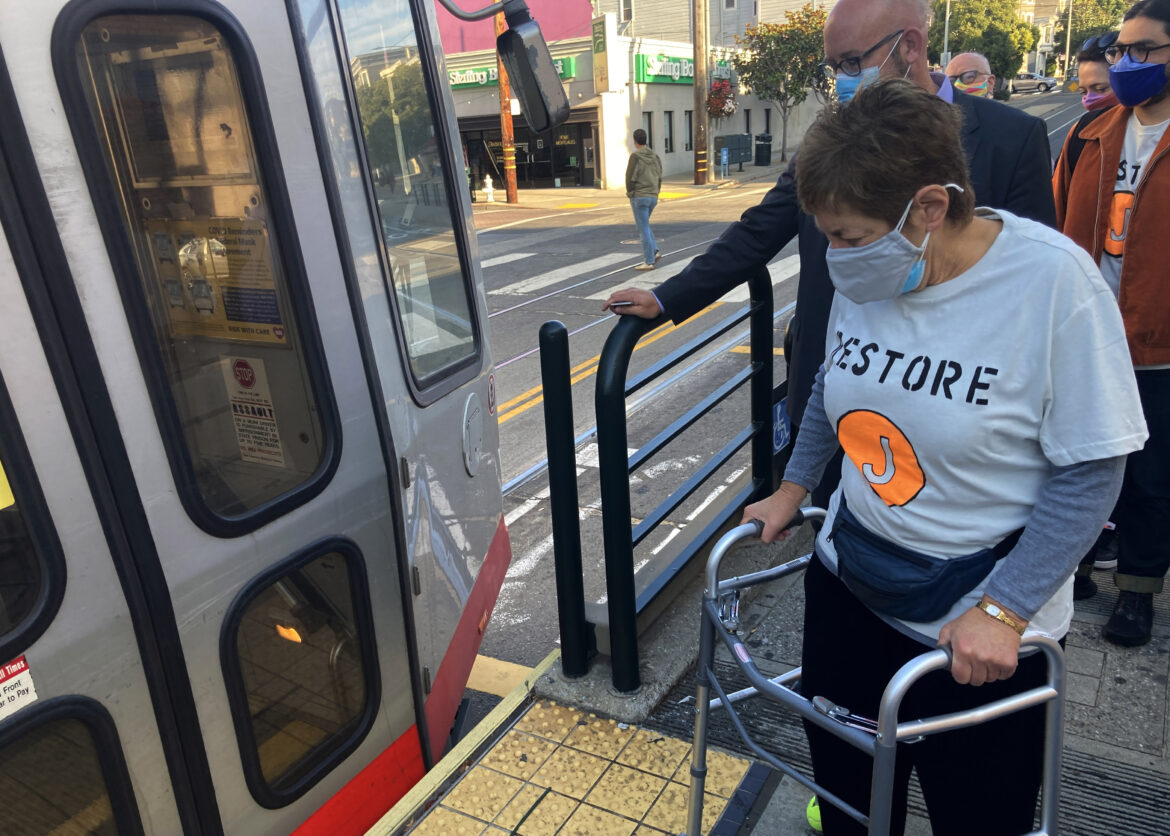 After making a nearly hourlong trip with two transfers across three transit lines to cover 2.2 miles, Kathy Setian was not going to join a rally to mark Transit Month at City Hall. Instead, she was getting a ride home in a car.

Setian, who uses a walker, had participated in a ride-along event to call attention to the difficulties that riders who use mobility devices face when transferring from the J Church line to a Market Street line, a transfer prompted by pandemic-related service changes.

“They said it was to try to speed up the trains. But it imposes a huge impediment to people like myself,” Setian said.

Jeffrey Tumlin, director of the San Francisco Municipal Transportation Agency, said even with the transfer, travel time on the J Church line to the Embarcadero has gotten six minutes faster because of increased reliability in the system, but that the agency is continuing to evaluate the transfer because of problems it causes for riders with mobility impairments.

As public transportation advocates and officials mark Transit Month in San Francisco and encourage riders to return to buses and trains, they are grappling with the reality that Muni needs, and has long needed, additional robust and long-term funding to meet the city’s transit demands.

At the beginning of 2020, the San Francisco Municipal Transportation Agency was planning service enhancements.

“Then, of course, COVID hit and wipes all of that out,” said Tumlin. “We’ve known for decades that Muni has been growing increasingly slow, increasingly unreliable, increasingly crowded, and that so many of the goals that we’re trying to achieve in San Francisco require a far better Muni system than we had back in 2019.”

But Muni must make do with a fixed set-aside from the city’s general fund, plus parking fees and transit fares. And revenue from parking and transit has not kept pace with the cost of services. Parking revenue, for example, dropped with the ascent of Uber and Lyft, which meant fewer people parked in city garages. Meanwhile, labor costs rose with the cost of living.

“Historically, we’ve papered over that gap by gutting maintenance. The reason why Muni has been unreliable is because we’ve continued to defund maintenance in order to try to deliver more actual transit service than we can afford,” Tumlin said. “COVID made it impossible for us to fake our way out of the problem, because the loss of revenue was so dire.”

“Our biggest problem, actually, is not that people are not coming back to Muni,” he said. “If you take Muni on the weekends, or midday, or during the morning school rush, our buses are packed. The problem is that all of those giant office buildings in downtown San Francisco are empty.”

Nonetheless, city leaders including Tumlin boarded light rail trains and buses on a bright Wednesday morning in early September to mark Transit Month, an event that is part celebration and part public education.

“The biggest challenge public transit has: It is not as sexy as so many other areas,” Gwyneth Borden, chair of the San Francisco Municipal Transportation Agency Board of Directors, said at the rally at City Hall.

“It is sexy to me,” she assured transit advocates. “But it’s very costly to support, especially to keep, to maintain the reliability and the service.”

“We need all of our elected leadership, everyone in the public, the Transit Riders and everyone to help champion us for a future that we can provide the visionary transportation network that everybody wants and everyone deserves,” she said.

Cat Carter, director of the nonprofit San Francisco Transit Riders, described Transit Month as an opportunity for public conversation about priorities. She offered this context: She said that Muni can provide 700,000 daily rides while producing less than 1% of the city’s greenhouse gas emissions; that the pre-pandemic weekly average of riders on the Geary Boulevard corridor was greater than the weekday average Caltrain ridership; and that Muni serves more than half of the Bay Area’s transit riders.

“It takes a while to get people from starting to think about it, to starting to take action. But we have to start somewhere,” she said.

Throughout the month, the Transit Riders will hold contests with prizes including event tickets, Warriors swag and Clipper cards, encouraging people to return to or try out public transportation.

The Transit Riders have a few plans of attack to advocate for the funding that everyone says Muni so badly needs. Federal and state governments could allocate some money.

“Putting political will aside, we could pretty easily shift highway funding to transit. And that would be huge,” Carter said. “Highway funding does not have to go just to highways, it can go to getting people around.”

Her organization is gearing up for a potential effort to reauthorize Proposition K, an existing half-cent sales tax, and a discussion about how to spend the revenue it raises. Another possibility is developing a proposal for a Transit Benefit District, through which property and business owners who want high-quality transit in their areas pay into a fund to support it.

In the meantime, riders can express their priorities for transit through Transit Month events and through the transportation agency itself, which will be considering service expansion proposals as the system emerges from the pandemic.

“Right now, we are frantically hiring and training new operators, new mechanics, new machinists, in order to be able to do our next round of service expansion, which we’re targeting for February,” Tumlin said. “So, what we’re asking the public for help on is, once we have new operators and mechanics available, how should we allocate that service?”

The agency is considering three options that all restore Muni to about 85% of its pre-pandemic service hours. Each strikes a different balance between speed and frequency on main lines, and the restorations of lines that are still not in service. Riders can find those plans on the SFMTA website and respond to a survey.