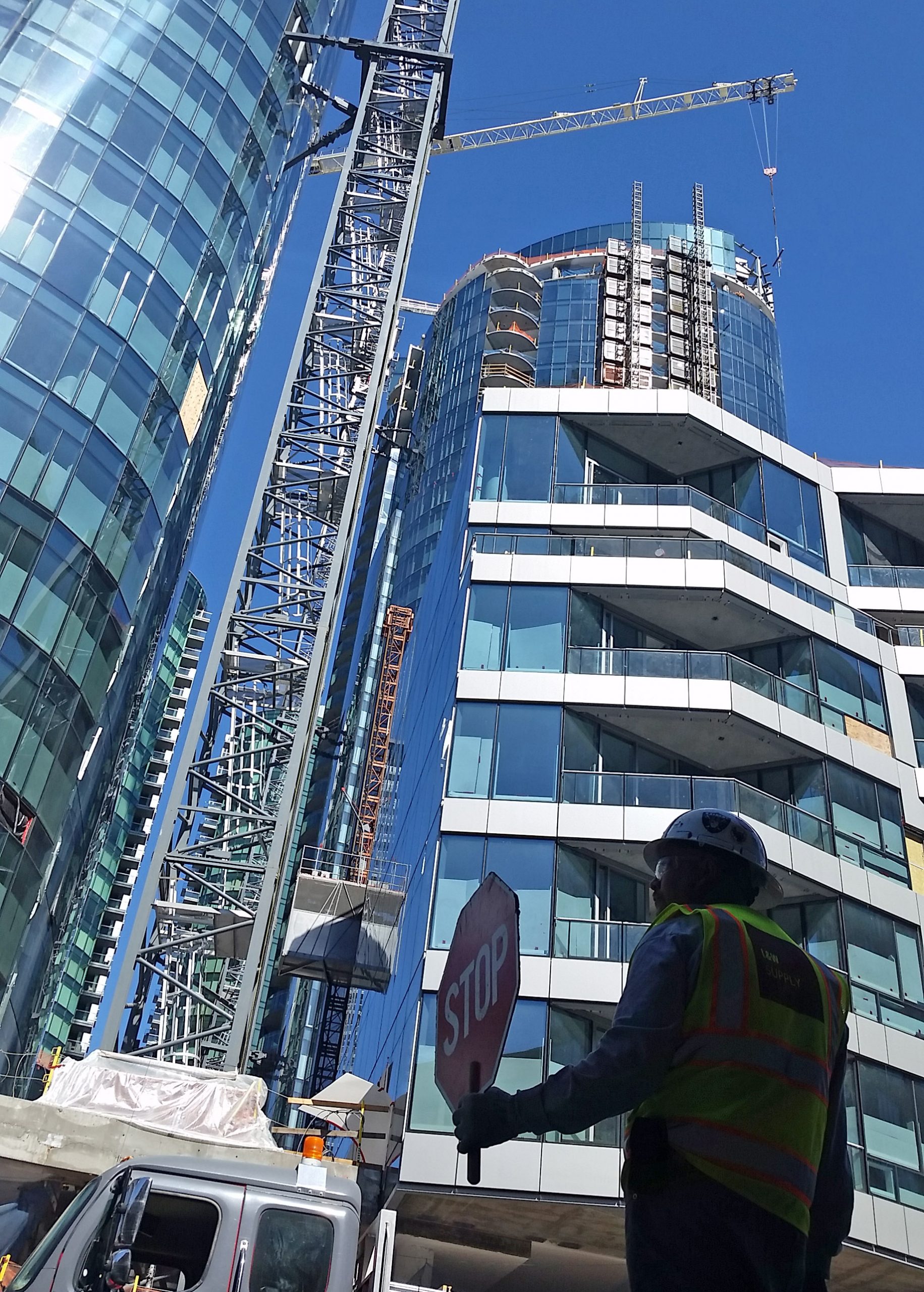 Construction continues on the massive luxury condominium project by developer Lumina, at 201 Folsom St. If Supervisor Kim’s idea became a reality, then San Francisco City Hall might bolster its budget for building new affordable homes by taxing the sales of expensive condominiums like these. Photo by Noah Arroyo / San Francisco Public Press.

San Francisco Supervisor Jane Kim wants to help pay for new affordable housing in the city by imposing a tax on sales of luxury condominiums.

More than 1,300 units of housing are planned for construction along the city’s Central Waterfront, ground zero for high-end development. “Why don’t we start to capture the value of that?” she said at a town hall-style forum in early March where she first floated the idea publicly.

San Francisco is an expensive place to live — it has the nation’s highest median rents in one ranking, beating out New York, Boston and Washington. Oakland’s median rents ranked fifth.

And public funding for construction of affordable housing is limited, as we have reported. San Francisco voters turned down a different tax measure in November: Proposition G would have taxed sales of multiunit properties that sellers had owned for less than five years. They did pass Kim’s Proposition K, supporting the goal of building or refurbishing 10,000 affordable units by 2020 — just without the funding.

Kim said she did not model her own luxury sales tax concept after New York State’s so-called mansion tax, in effect since 1989, but the two are similar. In New York, anyone who buys a residence of any kind for at least $1 million pays a tax of 1 percent on the transaction — a minimum of $10,000. Between fiscal years 2008 and 2013, the tax earned New York State more than $1 billion, and one year it brought in more money than the state’s alcohol tax, CNBC reported.

Kim did not speculate what price level would constitute a luxury home in San Francisco, but she did say $1 million seemed too low because it would apply the tax to too many home sales. The median selling price for a San Francisco home hit $990,000 in January, according to real estate site Trulia.com.

Echoing descriptions of San Francisco’s affordability crisis, New York’s city council said this month that rents there have increased nearly 40 percent in the last two decades, while wages have risen only 15 percent. “New Yorkers now have limited options for housing and have to spend an excessively high share of their income on rent, leaving them very little for other basic needs,” the council wrote.

New York City leaders asked the state for permission to expand the mansion tax program, laying their own tax on top of the state’s to explicitly fund new affordable housing. The additional 0.5 percent tax the city council wants to levy on home sales that breach $5 million would bring the city an estimated $52 million in its first year.

San Francisco already charges a “transfer tax” of up to 0.6 percent on home sales, on top of the state transfer tax of 0.11 percent. Some California cities have higher transfer taxes, but most do not charge one at all.

Kim said she might not formally move to put her proposal on the ballot for at least a year because she hopes to put an affordable housing bond of at least $250 million before city voters first.