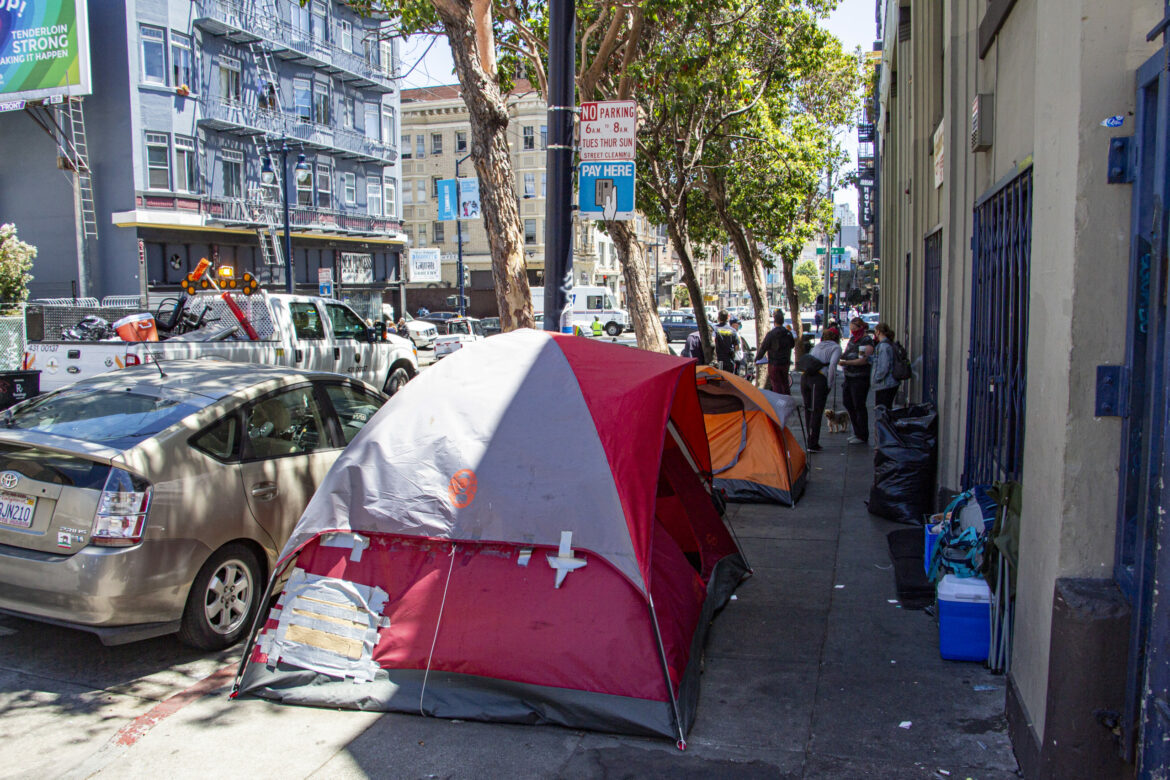 Facing the high costs of pandemic response, San Francisco officials are making a play for a pile of cash that voters created through a 2018 ballot measure.

But many of their proposals for that money lose sight of what voters had in mind when they passed Proposition C, says the measure’s author. That was to finally turn the homelessness crisis around.

Proposition C established a gross-receipts tax on large businesses, netting hundreds of millions of dollars in revenue that was locked up in court until September. City staff last week appealed to the fund’s oversight committee, requesting money to cover recent expenses and expand existing programs, including a pharmacy run by the Department of Public Health. But these are hardly the types of results that voters expected, said Jennifer Friedenbach, who wrote the ballot measure and is the executive director of the Coalition on Homelessness.

“They’re proposing to lock in funds with very little resulting in people getting off the streets,” said Friedenbach, who reviewed the departments’ requests as a member of the Our City, Our Home Oversight Committee. “If it doesn’t move people off the streets, then what are we doing?”

The committee will discuss and vote on a potential spending plan at its Tuesday meeting, which is open to the public and begins at 9:30 a.m.

The fund contains $721.4 million that could be spent in this fiscal year, ending by July 2021. The city’s controller envisions lower fund balances for the next two fiscal years — $352.9 million from July 2021 to June 2022 and $341 million the following year.

Proposition C requires that portions of the revenue go toward specific purposes: at least 50% for getting people directly into housing, including through short-term rent subsidies; at least 25% for mental and behavioral health services; up to 15% for homelessness-prevention programs; and up to 10% for hygiene programs and temporary housing like emergency shelters. The oversight committee must craft a spending proposal to the Board of Supervisors, which may modify it before voting on it. The committee is composed of four appointees each from the board and Mayor London Breed, as well as one from the city controller.

In a proposal to the committee, Abigail Stewart-Kahn, interim director of the Department of Homelessness and Supportive Housing, requested $12.7 million to delay the closure of the city’s hotel program, where about 2,200 homeless people are sheltering in place to slow the spread of COVID-19. The program was previously slated to end by June 2021, and this money would help extend it through November.

Over the next two years, the department would also draw $31.5 million from the fund for long-term subsidies for adults transitioning out of the hotels into permanent housing, as well as $32.6 million for subsidies for seniors. An additional $17 million would keep city-approved tent encampments, where homeless people can socially distance outside, open for two years beyond March when they’re scheduled to close.

But the single biggest request is for $66 million in year two, to reimburse the city for its recent purchases of the Granada Hotel and Hotel Diva. The properties will add 362 permanent supportive housing spaces, where formerly homeless people live at subsidized rents and often receive services on site.

Objections to funds for existing programs

Friedenbach took umbrage with that request.

“That’s just ridiculous,” she said. “The Board of Supervisors made a decision expecting for it to be paid for by general funds, not by Prop. C,” referring to the purchase of the hotels.

The spirit of the ballot measure was to fund new initiatives — beds, housing, treatment programs — that otherwise would not happen, she said. “We were very clear with voters: We are not going to supplant existing funding.”

The Department of Public Health asked the committee for $30.4 million from the fund’s first-year disbursements, with that amount increasing in subsequent years. The bulk of that would go to the Street Crisis Response Team, launched in November, consisting of health specialists who will replace police officers in responding to nonviolent 911 calls about behavioral health issues. The department also requested money to expand operating hours at its Behavioral Health Access Center and its pharmacy, and to create 150 beds for mental health and substance-use treatment.

Friedenbach bristled at many of these requests, too, because, other than the beds for mental health and substance-use treatment, they would not directly result in getting people off the streets. “This stuff just doesn’t fit,” she said, and called the Street Crisis Response Team a “very, very expensive model.”

“It’s locking in a lot of money once we get to year three,” she said. “Almost 70% of the behavioral health funds would be locked in.”

If the departments received the money they were requesting, then that would use all of the funding intended for housing homeless people and begin siphoning from the other categories of funds by the end of year two.

In response to these criticisms, Jenna Lane, a spokesperson for the public health department said via email that staff were, “working with City and community partners on a variety of programs designed to provide people experiencing homelessness, serious mental illness and substance use disorder with the right care at the right time. We look forward to continued engagement with the Our City, Our Home Oversight Committee.”

Staff at the homelessness department did not provide a comment by the time this article was published.

Friedenbach, a Board of Supervisors appointee to the committee, proposes a different spending plan that she co-authored with committee member Lena Miller, a mayoral appointee. It emphasized long-term solutions while factoring in some of the departments’ requests. She wrote it in consultation with homeless service groups.

The plan would not repay the city for acquiring the Granada Hotel and Hotel Diva. For now, it would only partially fund the extension of the shelter-in-place hotels, with the expectation of giving the city more money later if it became necessary. It would provide workforce development programs to the formerly homeless people departing those hotels for other housing, to increase their odds of staying housed. And, compared with the homelessness department’s pitch, it would shift money from short-term to ongoing rent subsidies to get people off the streets, including for families, as well as for homeless people in the Bayview. Friedenbach said the neighborhood’s unhoused residents were historically underserved by city services.

Overall, the proposal would leave much of the fund untouched so that the committee could analyze by early 2021 various possible long-term spending plans, to figure out how to get the most people into housing, Friedenbach said.

One strategy might be to buy more hotels at depressed prices — a potential silver lining of a pandemic that is chilling the city’s real estate market.

At their Tuesday meeting, if the full committee approves a spending plan then it will proceed to the Board of Supervisors’ Budget and Finance Committee, which might review it the following day.

Members of the public can watch and comment during the oversight committee’s 9:30 a.m. meeting tomorrow by following this link. They can also leave public comment by calling 415-655-0001, and using the access code 146 422 6101.