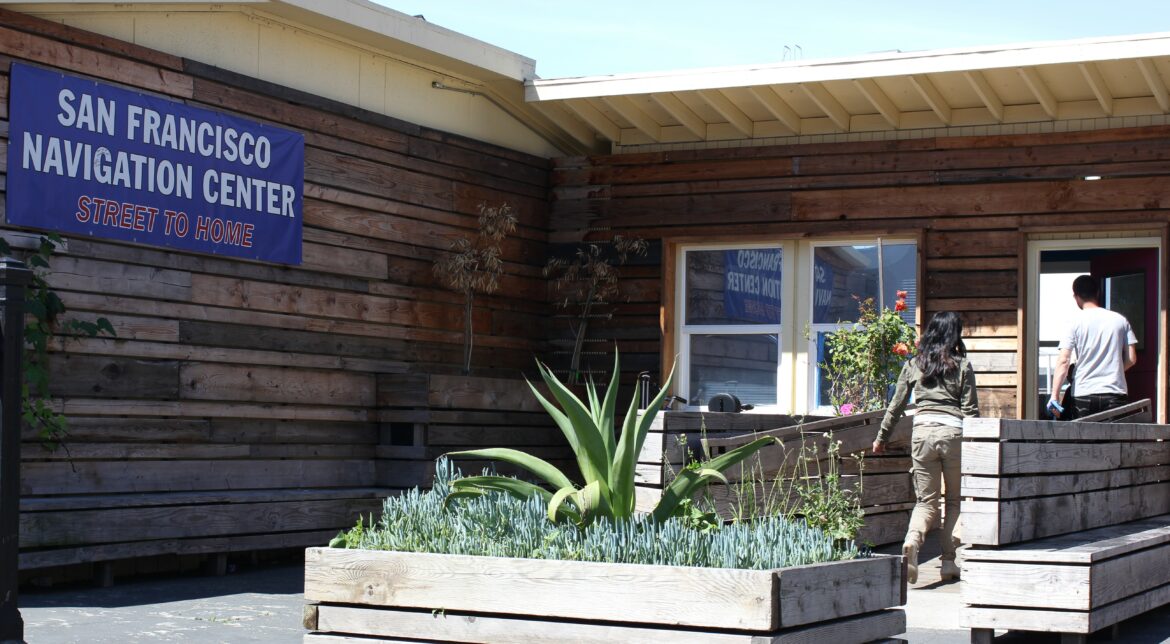 This Navigation Center in the Mission, opened in March 2015, was one of the first to serve San Francisco’s homeless population. In early 2019, development began on a plan to turn the site into 157 affordable housing units.

San Francisco will soon spend previously unthinkable sums on the fight against homelessness. The massive influx of cash — nearly $600 million over the next year collected thanks to a voter initiative, combined with hundreds of millions of dollars in expenditures by the homelessness department — could be a game changer.

Up to now, the city’s approach to delivering homelessness services has been based on a “scarcity mentality,” said Jennifer Friedenbach, executive director of the Coalition on Homelessness and chief architect of Proposition C, the 2018 tax measure that created the revenue. A court victory this month has enabled the city to begin spending it.

“When you have all these people competing for the same thing, you pick and choose,” she said of homeless service-seekers. “You create eligibility criteria to narrow down that funnel. But now we can open up the funnel.”

The Our City, Our Home Oversight Committee, which includes Friedenbach, held its first meeting last week to start discussing how to use the money. In conversation with the Public Press, some members shared their top ideas — such as expanding government-approved encampments and taking advantage of depressed real estate prices to create more housing for homeless people.

“We know what the solution to homelessness is: It’s permanent housing,” said Cynthia Nagendra, executive director of the Benioff Homelessness and Housing Initiative at the University of California, San Francisco. She is the only member of the nine-person committee to be appointed by the Office of the Controller. The Board of Supervisors and Mayor London Breed each appointed four members.

“Permanent supportive housing and its effectiveness has been proven over and over and over,” Nagendra said, referring to housing that is subsidized and often coupled with social services on site. “It’s one of the most settled areas of research on homelessness.”

Such housing serves the dual purposes of getting people off the streets and, by giving their lives more stability, making it easier for them to keep appointments and access health care and other services, she said.

Nagendra added that the committee should examine the feasibility of establishing more permanent supportive housing units in apartment buildings otherwise composed of conventional, market-rate units — called a scattered-sites approach.  San Francisco already has some of these, she said, and it could make sense to establish more.

About 10,000 people live in 8,012 city-managed permanent supportive housing units, said Denny Machuca-Grebe, spokesman for the Department of Homelessness and Supportive Housing. Most of those units are in buildings specifically focused on this type of housing, he said, rather than in market-rate buildings.

Acquiring buildings or individual units could be easier now than in previous years, if the pandemic-induced recession lowers real estate prices so that the city’s dollars can stretch further, Friedenbach said.

“We’re in this really magical moment because the real estate market has softened,” she said. “We have potential to buy — like buying a hotel, or board-and-care facility for sale, and having long-term residential support for folks with really severe behavioral health issues and can’t cook for themselves, for example.”

New permanent supportive housing costs an average of $32,000 per unit annually, according to 2018 figures from the Office of the Controller that were used to calculate the potential impact of Proposition C in the lead up to the vote that November.

This year’s Proposition C revenue could fund the creation of more than 6,100 units of permanent supportive housing, based on a rough calculation — dividing the portion of the revenue projected to be used for this purpose by the 2018 per-unit rate.

That would house all the unsheltered people tallied in San Francisco’s 2019 biennial homelessness Point-in-Time Count — likely an undercount — with more than 900 units to spare.

Permanent supportive housing is among the most expensive remedies to homelessness in the city’s arsenal when calculated on a yearly basis, the 2018 figures show. The Rapid Rehousing Program, which helps newly homeless people get back indoors — often in other cities — costs more, at $40,000 per recipient. Emergency shelter costs $25,550 per bed, and legal counsel in response to eviction threats costs $3,500 per client.

The city could also scale up its regulated outdoor camp sites, said Lena Miller, one of four mayor-appointed committee members and executive director of Urban Alchemy, which manages the city’s sanctioned camp at Civic Center.

The sites could become hubs where social workers meet with resident clients and help them over time to get off the streets. That would be similar to an approach that Seattle has used effectively to transition people into housing.

“People are living in squalor, living in filth,” Miller said. “You can tell from the way they’re acting, they’re not healthy mentally. It’s not OK.”

“You provide clean, safe spaces, and then if you’re safe, you have your basic needs met, you have food and hygiene,” she said. “Then you can start working on the other stuff.” Temporary housing programs were top of mind for Miller because they were her expertise, she said, but she would be receptive to other ideas.

Proposition C created a gross-receipts tax on businesses with annual revenues surpassing $50 million, and designated portions of that tax revenue for certain categories — for example, at least half for permanent housing and up to 10% for temporary beds and hygiene programs. The expenditures cannot replace those by the Department of Homelessness and Supportive Housing, which had a $364 million budget in the most recent fiscal year.

The city will hold the tax revenue in reserve while the committee creates its proposal for specific outlays to departments and programs, said San Francisco controller Ben Rosenfield at the committee meeting. The Board of Supervisors will consider those recommendations when crafting the spending plan that they later pitch to Breed. This process will occur apart from negotiations over the rest of the city’s budget, which Breed must approve by Oct. 1.

The tax will raise an estimated $340 million per year. The city has been collecting revenue since Proposition C’s passage but could not spend it until now. That money will roll over into the current fiscal year, which began July 1, totaling about $591 million.

Officials have already tried to stake claims on portions of the new money for various purposes, which the committee will review.

The biggest proposed use is $197 million to repay the city for recent homelessness expenditures. Friedenbach, one of the board appointees to the committee, said she and the other members will discuss whether that would be a proper use of funds.

“We’re asking for line items, to figure out if they actually qualify for Prop. C spending,” Friedenbach said, regarding the potential reimbursement. If the city did not draw the money from the tax measure’s revenue then it would have to come out of the general budget.

Breed has also proposed drawing $162 million from the fund for her Homeless Recovery Plan. The money would create permanent supportive housing for homeless people departing hotel rooms where they have been sheltering in place to limit the spread of COVID-19.

“The city has over 2,000 individuals that have been placed,” Rosenfield said. “That’s a temporary condition because we don’t expect FEMA and federal revenue to last for that long.” The Federal Emergency Management Agency reimburses San Francisco for certain costs related to the hotel rooms.

Rosenfield called it “a moral and financial imperative for the city, in the next couple of years,” to keep hotel occupants from returning to the streets.

The advisory committee is scheduled to meet the third Tuesday of each month, from 9:30 to 11:30 a.m. Members of the public can watch live at sfgovtv.org.