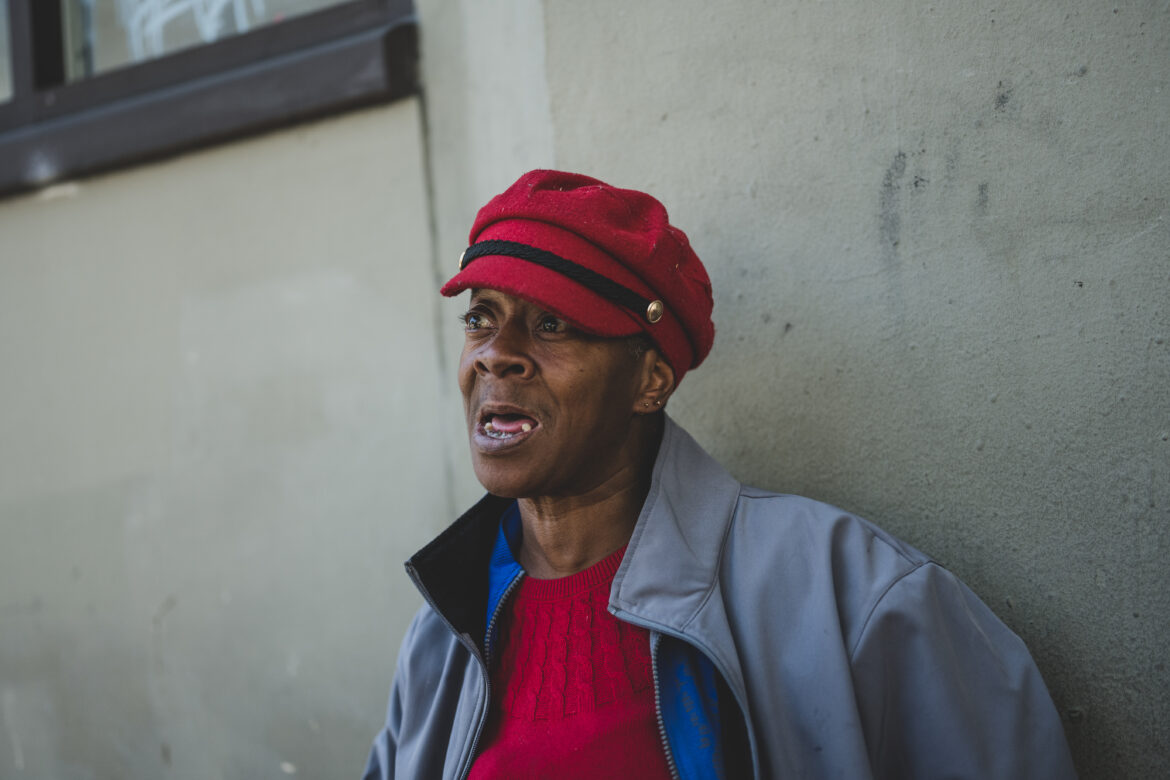 Stephanie, 57, lost her housing two years ago and was sleeping in a tent in the Tenderloin as of June. Like all the unhoused people photographed here, she was eventually relocated to a shelter-in-place hotel room. Close to half the residents of those hotel rooms are African American, according to an assessment by the city that only covered about half the hotel population.

Though roughly three-fourths of the assessed residents of San Francisco’s shelter-in-place hotels are minorities, the city has no plan to assure that those people get safe landing spots in proportion to their race as it prepares to wind down the program.

The Department of Homelessness and Supportive Housing has collected and assessed demographic and other information on just over half of the nearly 2,200 homeless people living in the hotels. Close to half of those are African American, and more than a quarter are Latinx or Asian.

Of particular concern for advocates is the priority list used to determine how to allocate housing to those experiencing homelessness. This system, called coordinated entry, does not take into account race when determining who is most in need of housing, despite the predominance of African Americans among hotel residents, service providers say.

Activists are also concerned that the city is moving too fast in trying to empty the hotels.

The racial breakdown numbers are drawn from paperwork those experiencing homelessness have to fill out to be assessed for housing. The intake forms require vital information: such as the number of years someone has been homeless, whether they have disabilities, and with what race they identify.

Those in the system must hit a numbered threshold to qualify for housing. The longer you’ve been homeless, the more severe your disabilities, the higher up on the list you’ll land. But these standards do not always reflect other issues service providers say are vital, such as race and immigration status.

Just 51% of all hotel residents have been assessed, based on charts prepared by the Department of Homelessness for Wednesday’s Budget and Finance Committee hearing on the hotel wind-down plan.

The paperwork provides a partial picture. Across all 29 hotels, 44% of residents identify as African American, 22% as Latino, 5% as Asian and 4% as Native American.

Data pulled from the 470 people residing in hotels that are slated for the first round of closures, now scheduled to occur before April 2021, is based on a much higher share of residents. Of those, 88% have filled out the assessment paperwork, and 48% identify as African American, 15% as Latino, 5% as Asian and 2% as Native American.

But the lack of accurate data concerns advocates who are worried the city is moving too fast with its plan to shut down hotels.

Laura Valdez, executive director of Dolores Street Community Services, said providers had to advocate with the Department of Homelessness to gather demographic data on hotel residents. “If the department is not collecting racial and sexual orientation and gender identity data, then they are limited in being able to use racial data to drive their strategies to end homelessness for communities of color,” she said.

The racial and ethnic data that is collected, Valdez said, should be broadened and made public to inform service providers about communities in need.

“The Department currently does not capture data on how many folks in the system are immigrants,” Valdez said. “We also don’t know, for example, if a child of color in S.F. is more likely to be unhoused than a white child. We probably have data to extrapolate that analysis, but they’re not effectively using that data to center race equity-driven strategies.”

The housing priority assessment forms themselves are also of concern to service providers, particularly those who work with communities of color. Valdez said unhoused Latinos she works with often don’t score high enough to qualify for housing.

Communication is one reason for this. Staff from the Department of Homelessness asking the assessment questions may not be fluent in Spanish.

Cultural competency is another concern. “Staff doing the assessments are not social workers or clinicians,” Valdez said. “They ask our folks to talk about their trauma and oftentimes our folks don’t feel comfortable disclosing that information, especially in a brief 45-minute assessment with someone they just met.”

The amount of time someone is homeless in San Francisco is also a key factor in qualifying for housing through the city, a requirement Valdez said immigrants often can’t hit.

“Our system is not set up to rapidly house this population,” she said. “Sadly enough, they may have to be unhoused for a long time before they are able to score high enough on the assessment. The system is broken.”

Joe Wilson, executive director of homeless service provider Hospitality House, said the entire entry system needs to be abolished. Hospitality House recently submitted coordinated entry assessments for two seniors — one age 85, the other 86 — both of whom didn’t end up qualifying for housing.

“I have no idea why,” he said, expressing frustration for the lack of transparency in who qualifies, and who doesn’t. “Who holds that data? Who has access to it? Does the public have an opportunity to review it, or do we just take the department’s word for it?”

Wilson believes algorithms such as the ones used by the coordinated entry system are not built to address racial inequity. If the city doesn’t take race into account when reviewing assessments for housing, he believes people of color will forever remain a majority in communities experiencing homelessness.

“People of color are already overrepresented in this system. So, if we end up with a computerized algorithm that simply preserves that inequity that’s not moving us ahead,” he said. “That’s what equity means: that you’re doing more to ensure equal access for people who have been systematically barred from that very thing.”

Valdez and Wilson plan to speak to issues of racial equity at Wednesday’s city Budget and Finance Committee hearing on the plan to wind down the shelter-in-place hotel project.

Advocates also plan to address many other issues: the program’s budget, availability of housing for people leaving the program, and the employment of hotel workers. It’s unlikely that coordinated entry will be a central focus point in the discussion, though frustration with the system won’t go unexpressed.

“To put the fate of life or death — particularly in the context of a global health pandemic — to a computerized algorithm is absolute insanity,” Wilson said. “I have nothing good to say about coordinated entry.”