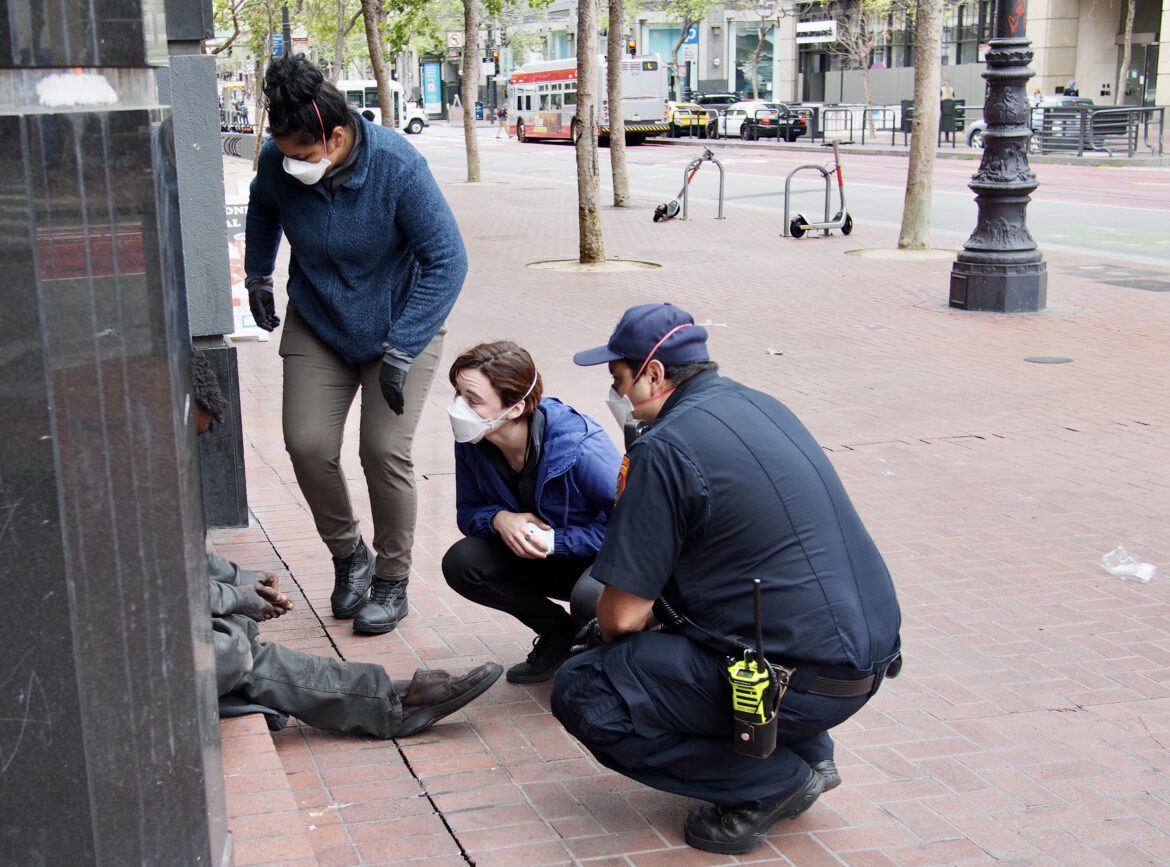 Courtesy of the San Francisco Department of Public Health.

The Street Crisis Response Team responds to a call.

Members of San Francisco’s Street Crisis Response Team show up to situations when someone is experiencing a mental health or substance-related crisis, as an alternative to police response, which can escalate such situations. Dr. Angelica Almeida with the Department of Public Health, Chief Simon Pang from the fire department, clinician Shari Lachin and peer counselor Miguel Levya talked with “Civic” about how the team engages people in distress and why the work is so important to them even if there sometimes aren’t enough resources to meet the need.

Almeida is a psychologist who oversees the health department’s street based and justice involved behavioral health system of care as well as the implementation of the Street Crisis Response Team.

“Something that’s unique to San Francisco’s program is the inclusion of a peer. And we know that integrating people with lived experience into our work has an incredible amount of support and opportunities to enhance the work that we’re doing,” she said.

Leyva is one of these peers. He was homeless in San Francisco for about a year and a half. Today he is a peer counselor with Richmond Area Multi-Services, or RAMS, and responds to calls with the crisis team.

“I remember being in that space, being in that corner of the street, wide eyes, not knowing where to get help and in crisis,” Leyva said. “I would say that I would benefit so much from having a Street Crisis Response Team. Folks who at least I identify with. Folks who are coming to me and giving me the time and the space and find out what’s going on.”

Almeida estimated about three-quarters of the people the team engages are experiencing homelessness. She said the team was also formed in partnership with nonprofits to establish a good connection with the community. Lachin, a licensed clinical social worker, is a clinical supervisor for the nonprofit HealthRight 360, whose behavioral health clinicians are members of the Street Crisis Response Team.

“For some individuals who have mental illness or mental health conditions, there is a mistrust of the system,” Lachin said. “So having those positive engagements in the community, where we’re able to de-escalate someone and they are able to remain in the community, helps to build and foster some trust in the system.”

Slightly more than half of incidents the crisis teams have responded to were resolved on the scene, without transporting the person in crisis elsewhere, preliminary city data indicates. Eighteen percent of people contacted by the team were transported to the hospital and another 18% were transported to a behavioral health setting. But beds in such settings are in short supply. Pang, the section chief of community paramedicine with the fire department who has been helping implement the street crisis response program, said even if demand exceeds available services, this approach is better than continuing the status quo.

“I mean, the alternative is to just pretend we’re blind and not respond and not try to help people,” he said. “So I don’t think we should stop our work because there aren’t enough proper places for people to go. And our teams are very resourceful. We will do whatever it takes to find shelter. Maybe it may not be a long term treatment program, but we could get someone to a sobering center, we can get someone to an urgent care clinic until an opening comes up and a treatment program.”

The Street Crisis Response Team is dispatched through 911 call centers and deploys four teams operating in different parts of the city at different hours. The Tenderloin team responds 9 a.m. – 9 p.m., the Mission/Castro is active 7 a.m. – 7 p.m., the Bayview team runs 11 a.m. – 11 p.m., and a Waterfront/North Beach/Chinatown team is expected to be fully operational 7 a.m. – 7 p.m. every day as of this weekend. One more team will launch this month to cover remaining neighborhoods. The city expects to have coverage around the clock citywide before the end of the summer.