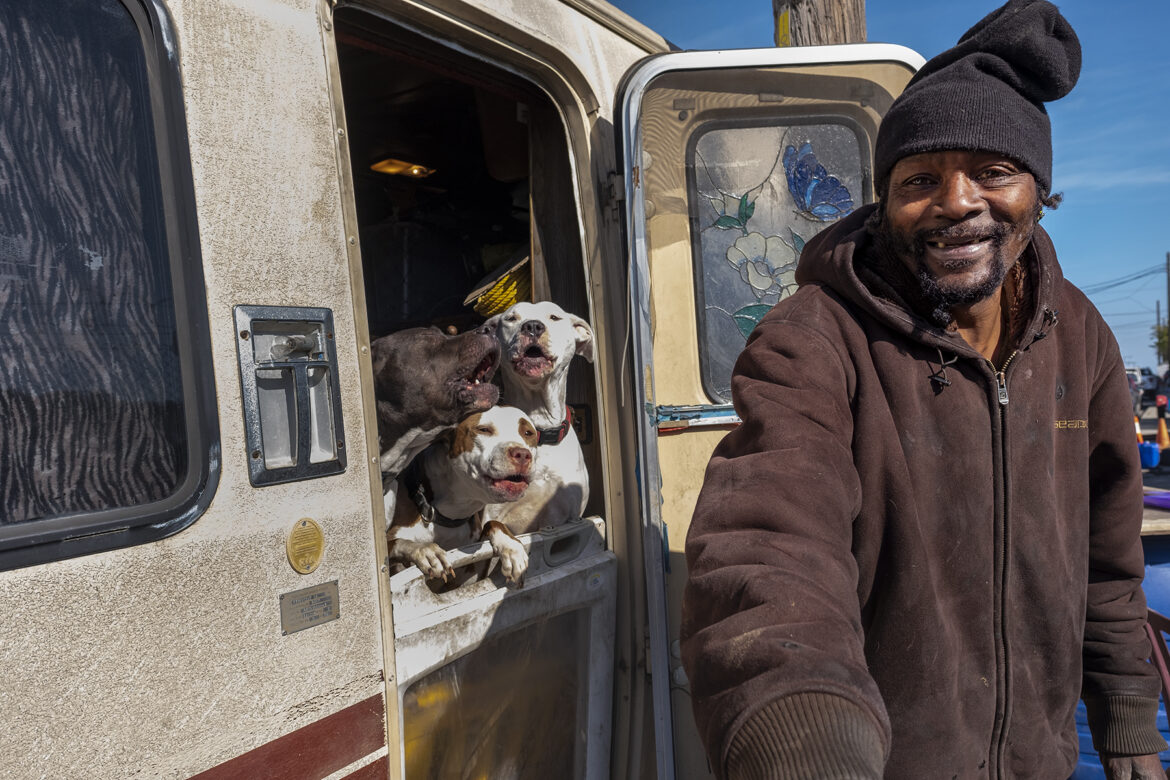 Edward Armstrong smiles after petting his Pitbull dogs, which live in his recreational vehicle on Carroll Avenue in the Bayview neighborhood.

Edward Armstrong lives on a dead-end street to avoid visits from parking enforcement — and for him, it is the road to stability.

The lifelong Bayview resident sweeps the sidewalk around the RV he lives in, acts as an overnight security guard for a cannabis company and looks out for his neighbors in other vehicles. By being a good resident, he hopes to avoid complaints from nearby businesses.

Before the pandemic hit, Armstrong was sure he would be pushed out by authorities. Instead, mere days after the shelter-in-place order was announced in March 2020, the Municipal Transportation Agency issued a temporary suspension of ticketing for street sweeping and a moratorium on towing vehicles for non-emergency reasons such as unpaid parking tickets or remaining in one location longer than three days.

Now, more than a year after COVID-19 shut down much of the city, the agency is set to resume towing and parking enforcement — but not before getting some pushback. At a 7-hour SFMTA board meeting Tuesday, directors aired concerns about the plan, pushed staff to revise the towing policy and insisted that any revised policy be subject to a board vote. The changes presented on Tuesday were informational and not subject to a vote.

“I don’t think it makes sense for us to make poverty tows, you know, from an economic standpoint, not even talking about the moral one,” said board chair Gwyneth Borden. “The whole idea of shuffling people around the city to avoid being towed is not a sustainable, or even a good way for people to live or to be treated.”

Executive Director Jeffrey Tumlin emphasized the need to manage commercial parking and “ensure a reasonable quality of life for residents and business owners, particularly in districts 10 and 11.” The agency has received complaints about abandoned vehicles taking up commercial parking spaces and making it difficult to do business or taking up street parking on residential blocks.

MTA staff committed to present a new plan in September to “reimagine towing.” Board members requested that plan include a clear process to make a distinction between vehicles that are safety hazards and those used for housing, a list of alternative parking locations to serve people living in vehicles and an impact analysis of the towing policy.

Meanwhile, towing enforcement is scheduled to resume later this month, with some adjustments to address critiques.

Vehicles left on public streets more than 72 hours, which the city views as abandoned, will be subject to towing again on May 17. The SFMTA approved giving vehicle owners an extra two days to move their vehicles, but only if a request is made.

An outreach program to forewarn owners with expired registration and delinquent citations is slated to begin on this date too. Towing for these violations will resume on June 21. This could push San Franciscans living in their vehicles to camping on the streets or toward finding space in shelters.

However, the city’s shelter system for adults stopped accepting new reservations last year to mitigate the spread of COVID-19. Over 1,000 names are on the shelter reservation waitlist.

Vehicle residents don’t have access to the kinds of services available in shelters. In March, the city closed the Vehicle Triage Center, a parking lot on the upper yard of the Balboa Park BART station that offered social and housing services for people living in vehicles.

“I’m quite concerned about reinstituting the tows when we have not yet heard anything about the increased ability to house individuals if we remove their vehicles,” director Sharon Lai said at Tuesday’s meeting.

Without information on how many people living in vehicles are being towed and whether they are all being offered services, the board of directors critiqued the move to reinstate towing.

“We do not have a clear sense of who is being towed. It makes it hard for a policy group to make a decision,” said director Amanda Eaken. “It would not get a majority ‘Yes, go ahead’ vote. If it was before this board, I bet it would fail,” she later added.

“The reprieve for the vehicularly housed has been crucial during this time and will continue to be going forward, both because of the pandemic and even more so because of the ongoing state of emergency that is homelessness,” more than 20 groups who call themselves the Stop Poverty Tows Coalition said in a letter to the agency.

The group demanded a less strict and rushed approach to collecting overdue fees. Debt owed to the agency for citations is already collected through vehicle registration holds. The coalition suggests using the Franchise Tax Board, which can garnish wages and intercept tax refunds, collecting debt without taking away the homes of poor San Franciscans.

The agency pointed out the towing program operates at a loss.

“Based on the revenue recovery model, we do not collect 100% costs for the program,” said Diana Hammons, senior manager of MTA’s Revenue Collections and Sales. The program costs about $28 million a year and collects about $23.5 million, she told the board. She attributed the revenue loss to discounts provided to low-income residents experiencing homelessness as well as tows of stolen vehicles.

The effects of poverty tows

“Losing a vehicle for the vehicularly housed means losing critical shelter, space for one’s possessions, means of transportation, employment, and the last piece of safety and stability,” the coalition wrote to the board.

A 2019 report titled Towed into Debt — whose researchers included several organizations in the coalition — counted nearly one million tows in California in 2016, and found “the most minor reasons for tow are some of the most common, and have the most devastating results.” The three most “unfair and counterproductive” reasons for enforcement, it said, were unpaid parking tickets, lapsed registration and parking longer than 72 hours in one spot.

The Stop Poverty Tows Coalition pushed to lengthen the amount of time a car can legally park in one spot from 72 to 120 hours and provide text messages or on-car notices to alert people that their vehicle may be towed. At the meeting, agency staff said they were “evaluating text messaging systems to ensure compliance.”

The coalition also proposed increasing investment in programs that dismiss parking citations for low-income or homeless people and creating low-income payment plans. These recommendations were accepted in last year’s budget, but the programs have challenges.

The low-income payment plans have no limits on fine amounts, and previously if a person failed to make a monthly payment, they defaulted on their plan. Citations could not be re-enrolled and vehicles were eventually towed.

At the Tuesday meeting, MTA staff described changes they expect to implement to these plans. They include providing a one-time re-enrollment option on failed payment plans, removing late penalties, lowering minimum monthly payments to $5, and giving low-income applicants 18 months to pay installments. Standard plans last 16 weeks with a monthly minimum payment of $25.

The low-income discount waiver requires applicants to verify their income is at or below 200 percent of the federal poverty level. They can do this by showing a benefits letter from the Department of Homelessness and Supportive Housing or enrollment in social service programs like CalFresh, MediCal or Supplemental Security Income. Many unhoused residents have difficulty meeting those requirements without an address.

“For those who are experiencing homelessness, a lot of them aren’t in the Coordinated Entry System, so there are huge barriers,” said Sam Lew, communications director at the Lawyers Committee for Civil Rights, referring to the system the homelessness department uses to manage its caseload. “We’ve also found coordinated entry staff also don’t know this is a resource.”

Since June 2020, only 41 homeless individuals have used this one-time discount waiver, according to records from the Lawyers Committee for Civil Rights. The application is more accessible for those who can submit it online.

Armstrong has lived in vehicles parked around the Bayview neighborhood for years. Two-and-a-half years ago, he got a lucky break: A vacant spot opened up on Carroll Avenue next to an empty lot, where he wouldn’t be blocking businesses. That, combined with the dead end, meant parking enforcement officers rarely ventured there.

“I figured, when I get that spot I’m going to stay there,” Armstrong said. In his first year, he was largely unbothered by authorities. But then the city installed street cleaning signs. Tickets began piling up.

Often, Armstrong wakes up in the middle of the night, prepared to move his vehicle on Monday mornings in case parking officers enforce the “midnight-to-6 a.m. no-parking rule” for street cleaning, which the city began enforcing again in the summer of 2020. On these days, he parks across the street.

When he arrived, “there wasn’t any sign, but then COVID hits and signs everywhere,” said Armstrong, pointing to a recently erected “No Parking Anytime” sign.

Police began cracking down recently. In March, officers told residents of the street they had to clear belongings from the southwest sidewalk for wheelchair access, even though pedestrian traffic is rare on the dead-end street.

Armstrong thinks it may be time to move on as challenges mount: the new parking restrictions, the growing pile of tickets and the cost of keeping vehicles registered. He has been offered a spot on a friend’s property outside the city where he can park and bring his dogs.

“That’d probably be the wisest thing to do,” Armstrong said. But leaving isn’t easy; the Bayview has been his family’s home for generations. His kids and grandchildren live in the public housing apartments nearby.

Nevertheless, he’s grateful for the past year. “Believe me, without COVID, they would have gotten rid of me a long time ago,” he said.

Yesica Prado is a multimedia journalist, and works best with photography, video, audio and long-form writing. Her reporting covers human rights, poverty, environmental justice, art, culture, immigration, and indigenous communities. Prado’s photography has been published in the L.A. Times, Huff Post and KQED. Prado is a first-generation Mexican immigrant. She has a master’s in journalism (M.J.) from the UC Berkeley Graduate School of Journalism, and a bachelor’s of fine art in photography from the University of Illinois at Chicago. When Prado is not snapping pictures or writing, she enjoys painting, hiking and riding her bike on an endless road.