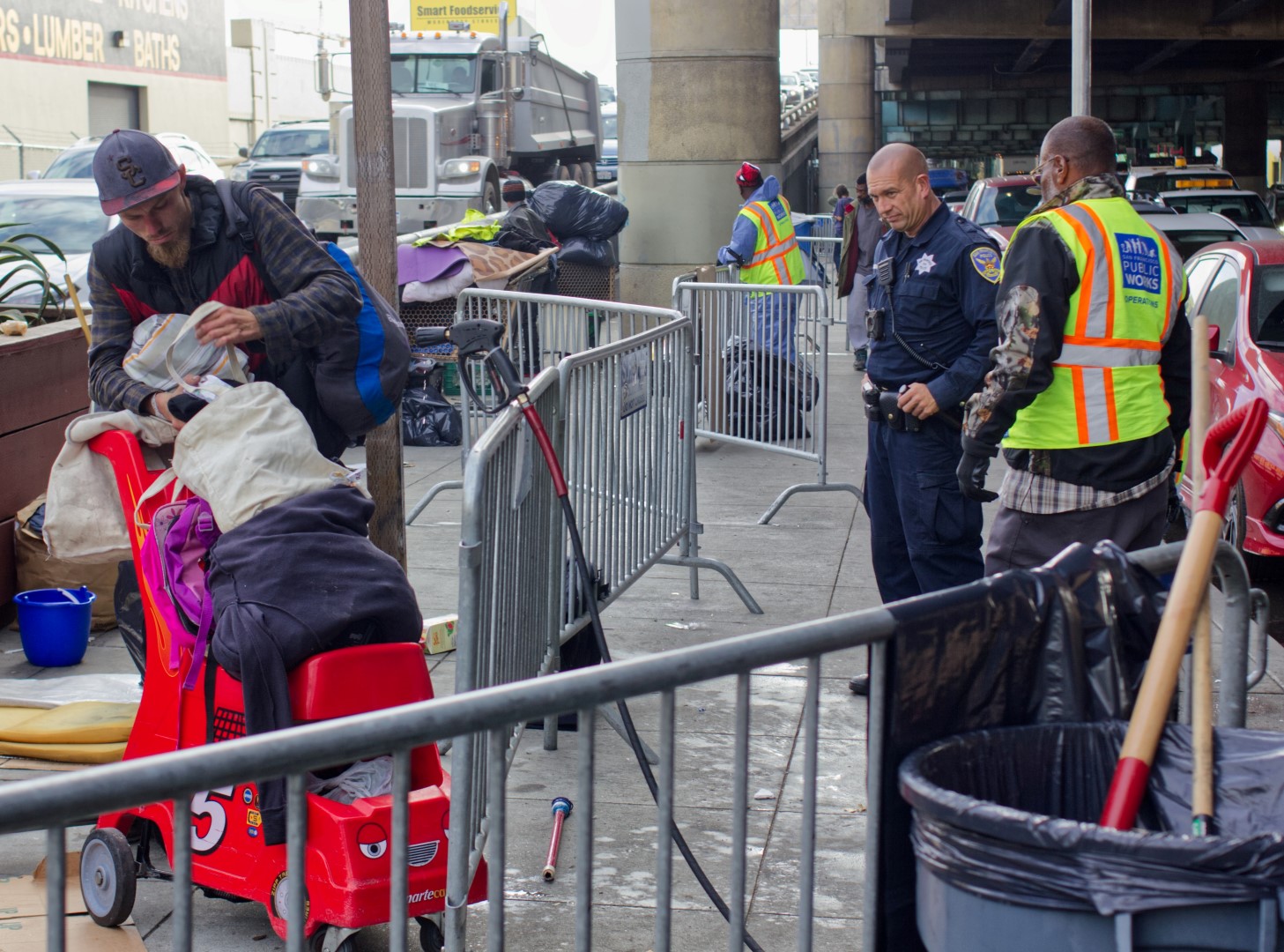 In October 2020, police stand by as staff from the city's Department of Public Works ask homeless people to relocate during a sidewalk cleaning, under Highway 101 near Market Street.

As seasonal rains return to San Francisco, the city does not have enough shelter beds for the people living on its streets. A report by a local advocacy group says the city’s practice of clearing encampments, regardless of weather, usually fails to bring displaced residents indoors or connect them with other resources, and exposes them to the distress of losing important personal belongings while being told to move along.

“I’m looking outside. It’s raining right now,” said Del Seymour, co-chair of the city’s Local Homeless Coordinating Board, an advisory group to the Department of Homelessness and Supportive Housing, at a recent board meeting. He questioned why the city had not increased its shelters back to full capacity when sports venues are operating at full capacity.

“I don’t understand how the city can do one venue and not the other,” he said. “Because one is run by rich folks who want a chance to see Steph Curry. And my folks are just more or less nobodies — considered by the city — that just lay on the sidewalk. I mean, it’s almost like, who cares?”

A homelessness department deputy director responded that the city has not yet expanded shelter occupancy because of COVID-19 safety protocols and the relatively low vaccination rates among unhoused people.

Later in the meeting, two members of the Coalition on Homelessness advocacy group raised the issue again during a scheduled presentation, alleging that the city’s encampment clearing practices are illegal in part because of the shelter bed shortage. Workers with the city’s Healthy Streets Operations Center clear encampments when there are enough open beds in the city’s shelter system to accommodate about 40% of that encampment’s residents in shelters. According to the center’s director, Sam Dodge, the formula is adjusted each week. Dodge previously told the Public Press that if so many encampment residents are accepting shelter offers that workers fear they will run out, the operation is suspended until the next day.

Encampment residents and their advocates tell stories of chaotic scenes unfolding in the early morning, confiscated belongings, excessive policing and few or inadequate offers of shelter.

“I lost a lot of stuff. I’ve had to start over numerous times. I couldn’t even count them on my hands,” Samual Roberts said. “DPW comes in and just takes everything, and we just had to sit on the sidelines, you know, and just watch them do it.”

Some people turn down shelter offers because they fear coronavirus exposure: They don’t want to live indoors with dozens of people. For others, the requirements are too strict. Many do not allow a person to shelter with a partner or with pets, or restrict personal belongings.

Roberts was one of eight people who testified about their experiences to Kelley Cutler, an organizer with the Coalition on Homelessness, and independent photographer Robert Gumpert. Cutler anticipated that people without reliable access to power and internet would have a hard time participating in a Local Homeless Coordinating Board meeting held online through the virtual platform Webex. So, she collected the testimony in advance and hoped to play it during the period normally reserved for public comments. But technical difficulties kept the sound from playing on the virtual platform, and co-chair Seymour moved to the next agenda item citing time constraints.

Christin Evans, a local bookstore owner who over the summer was briefly arrested at the scene of one encampment clearing operation by the center, came to discuss the report’s findings and her own experiences.

“HSOC does not have the resources that are needed to end people’s homelessness,” Evans told the board. “I’m really disappointed that we didn’t get to hear from the eight people experiencing homelessness tonight in this rain, to hear about their experience with HSOC firsthand,” she said. “I think you want to hear from the people on the street that are experiencing it day in and day out.”

The board is slated to hear the testimony at the beginning of its next monthly meeting on Dec. 6.