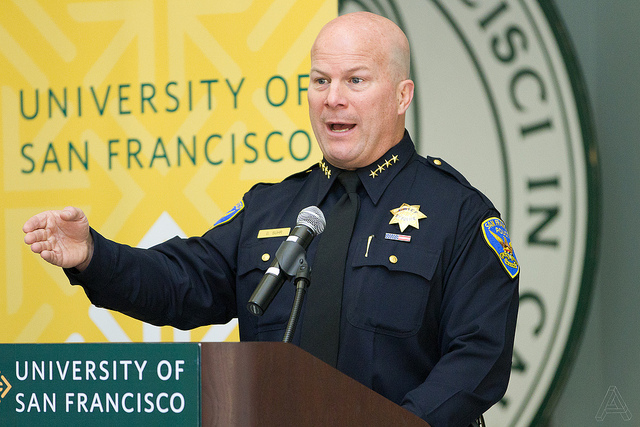 Police Chief Greg Suhr said his high salary was set before he took over. Creative Commons image by the San Francisco Foghorn student newspaper via Flickr:

By the end of September, San Francisco’s Greg Suhr will be the highest-paid police chief in any major American city, bringing in $307,450.

This distinction for the police chief comes at a hard time for San Francisco, which for more than three years has struggled with across-the-board budget cutbacks and started out this spring with a $263 million deficit due mostly to ballooning labor costs.

Suhr’s 2 percent raise on Sept. 29 will put his salary $159 ahead of that earned by Los Angeles Police Chief Charlie Beck, who commands a force more than four times San Francisco’s size. And it’s more than 50 percent higher than that of New York’s chief, who oversees 15 times as many officers.

The salary increase comes automatically as part of a bargaining agreement between the city and the Municipal Executives’ Association. “It was what it was when I got there,” Suhr said.

The contract, which expires in 2015, says the Police Commission may also award “merit pay base annual adjustments” up to 5 percent of the chief’s annual salary. But Suhr said that for the last two years, he turned down the $15,000 bonus.

“It’s not that I don’t like money,” Suhr said. He could not take the bonus “in good conscience” while other city employees were forced to take 12 furlough days during the 2010-2011 fiscal year.

News of the raise did not sit well with some elected leaders who struggle each year to trim hundreds of millions of dollars while avoiding the need to eliminate social services or defer needed maintenance projects.

“There’s a lot of bloated salaries at the top level of the police and fire department,” said District 11 Supervisor John Avalos, who is chair of the Public Safety Committee and vice chair of the Budget and Finance Committee. “Certainly, they have tough jobs, but I don’t think their inflated salaries are beyond the question.”

Suhr’s salary is $100,000 more than the average for chiefs of the nation’s 24 largest forces, according to a review of police departments by The San Francisco Public Press. The average major-city chief salary across the country was $193,692.

In California’s 60 largest cities, police chiefs received slightly higher compensation: $205,963 was the average maximum pay in 2010 to lead a police force in the 54 cities with more than 100,000 residents.

San Francisco, which this spring counted 1,751 officers, has the nation’s 14th-largest force, which means Suhr beat out other chiefs with similar or significantly greater responsibility.

In San Francisco, the Fire Department also pays quite well. Fire Chief Joanne Hayes-White’s annual salary is nearly the same — $302,068, also negotiated as part of a contract with the Municipal Executives’ Association.

The Department of Human Resources lists the starting salary for the chief of police as $301,418. Micki Callahan, the department’s director, who represented the city in the negotiations with the Municipal Executives’ Association, did not respond to requests for comment. Spokeswoman Jennifer Johnston said the salary of a department head is set in accordance with the size of the agency, the responsibility and the scope of its function.

Steve Ponder, the classification and compensation manager at the Department of Human Resources, said San Francisco is unique in that almost all employees are unionized, including managers. Out of the 26,000 city employees, only about 150 lack union representation.

Ponder said the discrepancy is based on the high level of responsibility entrusted to the San Francisco chief. While “there’s drugs, robberies, murder, the same thing” throughout the Bay Area, Ponder said, San Francisco’s chief has to deal with large events and protests, among other big-city issues. He said other major cities on the West Coast, such as Los Angeles, San Diego, Seattle and Phoenix, provide a better comparison.

Thomas Mazzucco, president of the Police Commission, equated the job of San Francisco’s police chief with that of the CEO of a major corporation.

“He’s running a business with 3,700 employees, almost three-quarters of a billion dollar budget,” Mazzucco said. “And you add to that, it is the most high-profile corporation in the city. At a corporation, you don’t get woken up at 2 in the morning because an officer has been involved in a shooting. We expect a lot out of him.”

Last December, the mayor forecast a $262.7 million deficit, in large part due to increasing costs in labor. Leo Chyi, the mayor’s deputy budget director, said that the increasing cost of health care for employees contributed to the deficit projection. He added that wage increases for city employees also meant automatic increases to the city’s contribution for retirement benefits, which will remain a burden on the taxpayers for years.

As the city’s economy strengthened, deficit projections shrank and city departments revised their estimates in March, predicting a shortfall reduced to $169.6 million for the 2012-2013 fiscal year and $312 million for 2013-2014. The balanced budget finally forwarded by the mayor found solutions in a fund balance from the previous fiscal year, which led to improvements to local tax revenue, savings from each department and an increase in outside funding.

The budget, which the Board of Supervisors passed at the end of July, increased the money allotted for police wages by 6.1 percent, or $19.3 million, in part to hire new officers as a flood of veteran officers are expected to retire. The city’s total labor cost increased by 7.6 percent, or $267.8 million. Half of the funds in the $7.3 billion budget for the next fiscal year will go toward citywide personnel costs.

While Suhr will receive his raise in September, most other city employees can look forward to a boost of 1.75 percent in the fiscal year starting in July 2013, what the mayor’s office calls “a modest wage increase.”