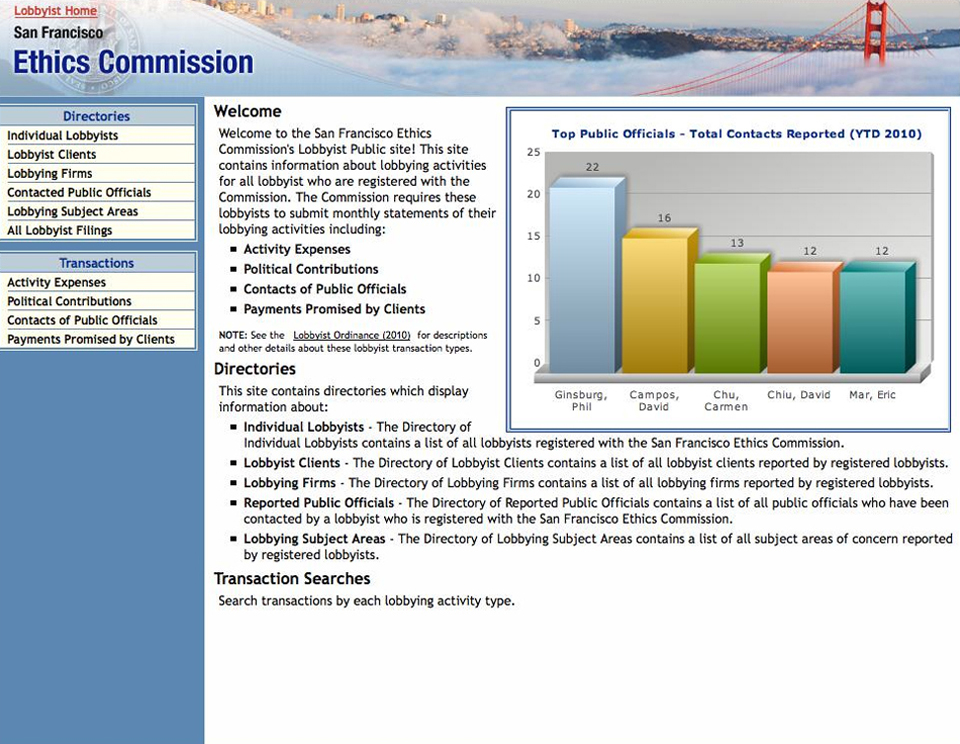 San Francisco has taken a big step toward shedding light on the dealings of lobbyists with local lawmakers, by taking information that was once relegated to filing cabinets and putting them up on the Web for everyone to see.

But the site, completed this year by an outside firm after local officials called for greater access to these documents, still has some bugs after months of active development. And it has received criticism from both city employees and outsiders who say the site could be made easier to use.

Last month the San Francisco Ethics Commission introduced a new portal on its website, www.sfethics.org, to allow the public to drill down into 2010 lobbyist activity summaries.

The site allows anyone to see relationships between public officials and lobbyists, such as donations to campaigns. The software company Netfile, which created a similar site for Los Angeles County, contracted with San Francisco in 2007 to create the site for $90,000 over three years. Last December, the commission approved a three-year renewal of the contract.

Steven Massey, the information technology officer for the Ethics Commission, drafted the guidelines for the site. He said the site lets anyone get answers to questions that used to require a visit to the commission’s office: “Which firms are getting the highest levels of payments? Which officials have been contacted the most? Where are the campaign contributions going?”

“That’s the kind of thing that we wanted to be able to represent very quickly and hopefully people will make use of that,” Massey said.

Companies disclose contact with politicians and the amount of political contributions officials receive from firms representing these companies. Lobbyists are now required to report their activities online instead of on paper, said John St. Croix, executive director of the Ethics Commission.

The site has drawn both praise and criticism from experts inside and out of the city. But some within city government have complained that the site is not very useful, while others involved with government activity laud the site as a groundbreaking use of Web technology.

The site still has some software bugs, such a glitch under “client details” that fails to show any contacts made by lobbyists on behalf of paying clients. After this was pointed out by a reporter, Massey immediately said he would try to fix, he said in an e-mail asking about the discrepancy. It also has a curious problem for a government website: Users who forget to type “www” in front of the domain sfethics.org end up on a completely different site, owned by a private company that parks unused domains. That is not supposed to happen.

One more serious critique is that users cannot export the data, allowing academic researchers, journalists and others to re-sort the information themselves. Another shortcoming is that city employees working as lobbyists are not disclosed. Both of these features are available on the Los Angeles lobbyist disclosure website.

“I think that having a database download feature is a crucial component,” wrote Oliver Luby, an investigator with the Ethics Commission, in a recent e-mail to Massey. The Ethics Commission provided responses to the site rollout through a public-records request.
Since users have to manually copy and paste data from individual tables, they “cannot perform various forms of sophisticated research facilitated by database downloads,” Luby wrote the day the site launched.
Another complaint is that the information is not comprehensive.
For example, the Fisher Foundation, started by the late Gap founder and art collector Donald Fisher, has contacted 24 officials this year in the interest of planning and building permit legislation, according to a search of the website. All that is disclosed is the subject of the conversation, but not the specific request.

St. Croix said the site is useful. “In most cases you should be able to infer,” he said. St. Croix also said that city lobbyists are not included because there is no demand for it and the city employs only two lobbyists.

“Everything is always a work in progress,” he said. “This is all we have for now. If it turns out there is a demand for something, we can come up with ways to provide it.”

David Wolber, a University of San Francisco computer science professor, said the site has improved disclosure. Wolber has worked with San Francisco on campaign finance disclosure through the university’s OpenCampaigns project. Some of his former students had worked on a similar lobbyist database site before the city chose to privatize it and use Netfile, which the city also uses for its campaign finance filings.

“It’s much improved from what it was,” Wolber said in an e-mail. “They have pics, they link the individuals to their companies, etc. And you can see their activities. This data was not available a couple of years ago.”

“As far as improvements, I think a key is integrating the lobbyist data with the campaign finance data,” Wolber said. “Politicians and lobbyists appear in both, but they are totally separate databases, so neither ‘site’ gives you the full picture, and researchers miss vital associations that might be of interest.”

Those who applaud the effort point out that San Francisco is one of a handful of cities to provide this information online. Several people with open government experience who were contacted for this story said they were not familiar with lobbyist disclosure sites.

The site, which is to be updated daily, contains a directory of lobbyists, firms, clients and contacted public officials.

“We have an appetite for real-time information on the Internet,” said John Wonderlich of the Sunlight Foundation, a Washington D.C.-based organization that advocates for increased government transparency. Wonderlich said he had never heard of such a site before and that he wished the federal government — which the Sunshine Foundation usually deals with — had such a site.

“We can track a package or see the balance of our checking account — we want to have that same experience with our government, and governments are only just starting to get caught up,” Wonderlich said.

The San Francisco site makes it easier for commission employees, who no longer have to deal with paperwork, as well as lobbyists who may now file from wherever they have the Internet, St. Croix said.

Lobbyist Eric Potashner, who works for the firm Platinum Advisors, said that he thought the new site was a good thing for the public, although his lawyers handle all the paperwork. From the site, a user can look up the firms he works for, what politicians he has contacted, the subject he was contacting them about and even his smiling picture.

“Although we’re a private company, we work in the public arena, so things we do should be part of the public process and should be able to be accessed by the public,” said Potashner, who currently lobbies for a variety of companies including AT&T and Zipcar. “If you’re doing something that you don’t want to the public to know about, you probably shouldn’t be doing it in the first place.”