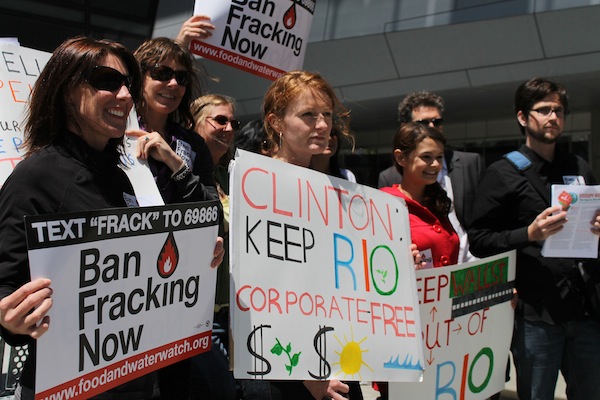 U.N. Plaza in San Francisco was a fitting backdrop to a Tuesday protest by environmentalists who said the world body’s conference in Rio de Janeiro this month could be ineffective. Photo by Ruth Tam / SF Public Press.

The Bay Area is the unofficial headquarters of the green movement and the progenitor of the United Nations. So locally based environmental groups are particularly annoyed this week that the U.S. government continues to sideline climate change as world leaders prepare to gather in Brazil in late June.

Leaders of several San Francisco-based environmental organizations are voicing their opposition to what they call the “greenwashed” agenda of the U.N.’s Rio+20 Conference on Sustainable Development. At an al fresco meeting Tuesday outside the Federal Building, just across the street from historic U.N. Plaza, protesters uniting as part of the Rio+20 Coalition said the U.N. should focus less on increasing the role of big business and government and more on small-scale community-based climate solutions.

“The U.N. was founded in San Francisco,” said Victor Menotti, executive director of the International Forum on Globalization, also based in the city. “It’s part of our historical legacy that the U.N. carry out its mission of peace, sustainability and justice. I think most San Franciscans identify with that, and realize that quality of life means clean air and water, which we often take advantage of here. San Franciscans are global citizens and we need to take an active role in protecting our planet.”

The U.N. conference in Rio de Janeiro marks the 20th anniversary of the historic Earth Summit there. Participants will discuss “a green economy in the context of sustainable development and poverty eradication,” and an “institutional framework” to make that happen.

The green groups said they wanted to prevent a repeat of the ineffective summit two decades ago. Although the 1992 event created the U.N. Convention on Biodiversity and the U.N. Framework Convention on Climate Change that led to the Kyoto Protocol, the accords have long been recognized as more talk than action.

Yet there is anything but consensus in the Bay Area about how best to protect the planet — judging by one upcoming event focusing on U.S. energy policy at Stanford University next week.

A forum will focus on the future of U.S. energy policy, drawing oil industry executives and government leaders from across the country. The meeting, organized by the Hamilton Project at the Brookings Institution will release three policy proposals focusing on modernizing bonding requirements for natural gas producers, promoting natural gas in the transportation sector and strategizing for U.S. natural gas exports.

The timing is a bit awkward given the protestors’ opposition to solutions drafted soley by big business and government.

Kristin Lynch, the Pacific Region director of Food & Water Watch, said international summits will not make strides in climate change until world leaders started regarding common resources as part of the public trust instead of mere commodities. “We’re looking for community-based solutions rather than corporate-based solutions,” she said.

Local politicians have rejected several state bills that Food & Water Watch supports that address environmental concerns. One of the group’s biggest campaigns is to ban hydraulic fracturing, the high-pressure injection of water, sand and chemicals into reservoirs to release oil or natural gas, known colloquially as “fracking.” SB 1054, a state bill to require oil companies to give 30 days’ notice to landowners within 300 feet of their fracking operation, was rejected by the Senate in late May.

Dave Massen, the San Francisco chapter leader of Citizens Climate Lobby, has been working with US representative Pete Stark and other U.S. chapters to pass the Save Our Climate Act (HR 3242), which proposes a national tax on fossil fuels that would channel the revenue to taxpayers in the form of dividends. The bill is currently working its way through the House.

Massen said he was not optimistic about international reforms this month coming out of Rio, especially since the Obama administration has not committed to attending.

“All these things tend to get more watered down than you would like,” Massen said, adding that the environment should be a big issue in the presidential election. He said President Obama has been “fairly aggressive” with the Environmental Protection Agency by going after mountaintop mining and coal plants, but in terms of his personal leadership and legislation, has been “a disappointment.”If he attended this conference, that would be a positive for me.”

Menotti agreed: “Obama said that our planet was in peril at his Inauguration Ceremony and that he’d be its protector. Instead he’s been the vendor.”