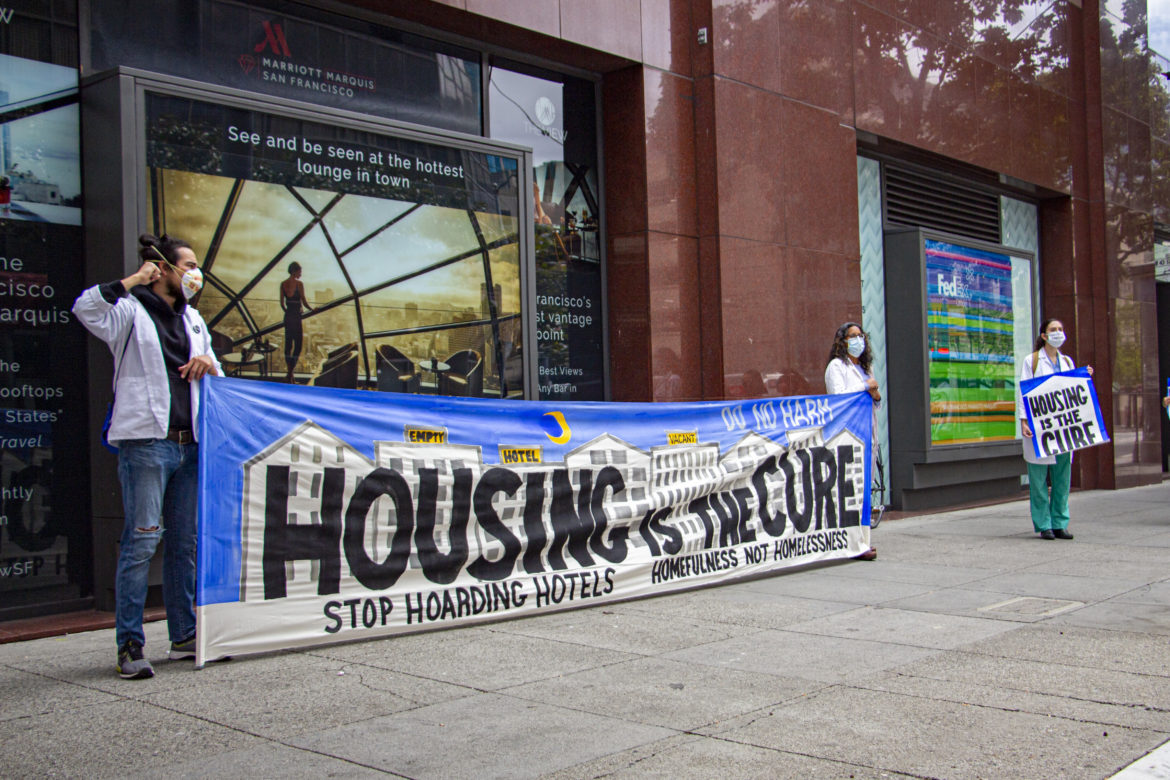 Protesters from the Do No Harm Coalition hold a banner and chant at a May 11 demonstration in front of the San Francisco Marriott hotel. Brian Howey / San Francisco Public Press

San Francisco will stop acquiring shelter-in-place hotel rooms for the city’s vulnerable residents and essential workers, the Emergency Operations Center confirmed in a statement late Wednesday. The city will continue to use the approximately 2,600 rooms under contract and plans to phase out the program by June 2021, the department said.

City departments determined that more hotel rooms were unnecessary after studying the “rate of infection and demands on our hospital system,” the emergency department said.

On April 8, officials said the city planned to acquire 7,000 hotel rooms to house essential workers and homeless residents who needed a safe place to self-isolate or quarantine during the coronavirus pandemic.

“It leaves us at a point where, unless they open some sort of safe shelter environment, people are going to be out on the streets,” Supervisor Matt Haney, whose district houses many of the city’s homeless residents, said of the city’s decision.

The Board of Supervisors unanimously passed an April ordinance requiring the city to acquire enough rooms to house the city’s entire unsheltered homeless population — just over 8,000 people. Mayor London Breed declined to approve the legislation. At the time, the city had acquired about 2,000 rooms.

In the nearly four months since then, the city has added just over 600 rooms to the program and supervisors and advocates for the homeless have repeatedly expressed their frustrations with the mayor’s stance — and the hotel program’s progress — since.

“I’m disappointed,” said Hillary Ronen, another supervisor who has been critical of the mayor’s response to homelessness during the pandemic and whose district houses a relatively high number of homeless people. “To just stop the program dead in its tracks and to not lease any more hotel rooms is a mistake.”

In emails to media and advocates, Human Services Agency Director Trent Rhorer said it would not be “fiscally prudent” to house all of the city’s homeless residents in hotels, particularly those who are not over the age of 65 or suffering from underlying health conditions, which make them more vulnerable to COVID-19. According to federal guidelines, rooms provided to residents who do not meet those criteria will not qualify for federal reimbursement programs that the city will rely on heavily as it reels from revenue shortfalls caused by the pandemic.

In recent weeks, city workers have been moving unhoused residents from the streets into group shelters and approved, outdoor tent camps instead of hotel rooms, despite concern from advocates that group shelters are dangerous due to spotty testing regimens and a general lack of social distancing even when staffers attempt to enforce distancing policies.

The cost of leasing the hotel rooms has been substantial.

“Through June 30, the end of the last fiscal year, the City has spent approximately $22.9 million in securing hotel rooms,” the emergency department said, adding that the city would add 6,000 supportive housing units over the next two years to ensure that hotel residents have a place to go after the hotel program winds down.

The city expects the Federal Emergency Management Agency, the federal CARES Act and California’s Project Roomkey, a statewide initiative to move unhoused residents into hotel rooms, to cover approximately 75% of its hotel costs. Project Roomkey has also been criticized for moving too slowly.