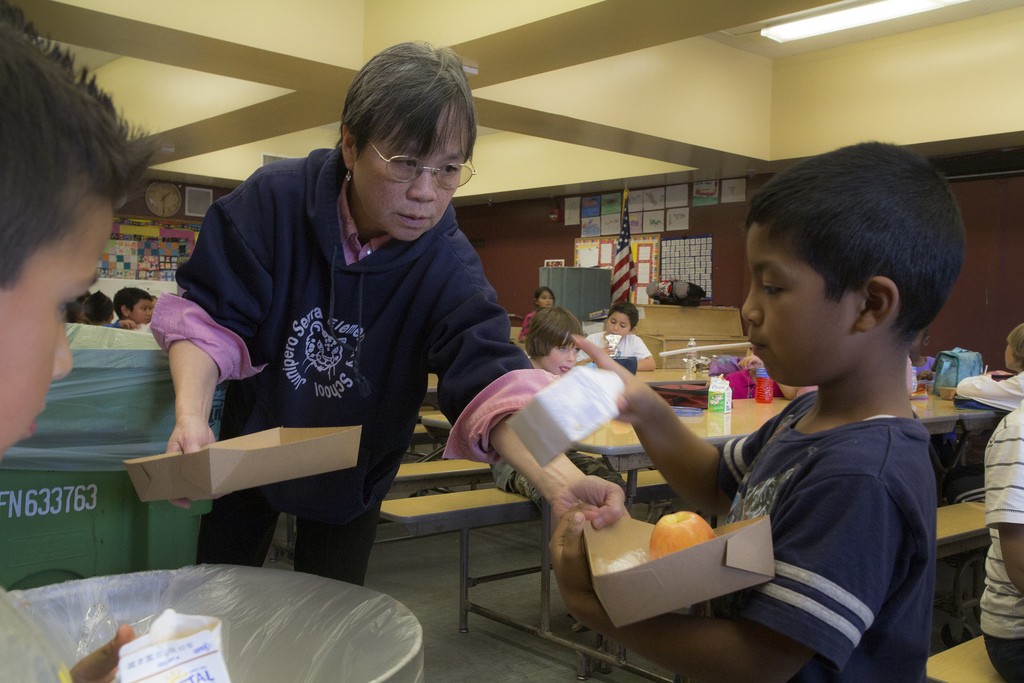 Ninety percent of students at Junipero Serra Elementary School in the Mission District are immigrants or children of immigrants — meaning many are English language learners, a group identified as “disadvantaged” by the state. San Francisco's new state funding targets aim to give more to schools with these populations. Last fall, Principal Evelyn Cheung helped students compost their leftovers at lunch. Photo by Tearsa Joy Hammock / San Francisco Public Press

An expected flood of new state money for San Francisco schools next fall was intended to offset educational inequities affecting students from low-income and immigrant families.

But many school officials say other, more pressing needs will make it hard to target the extra dollars to schools or programs serving disadvantaged communities. They say most of the funds are needed to fill structural deficits, pay for existing districtwide programs and boost teacher pay across the board.

It is not likely that the district will make drastic changes in programs for disadvantaged students the first year of funding under California’s new Local Control Funding Formula, said Myong Leigh, deputy superintendent of San Francisco public schools. The goal of the reform was to even out inequities among districts, but the state will likely give San Francisco school officials wide leeway in how they can spend the money.

But as the district ramps up for a debate this spring about how to spread around an estimated $39 million in additional state funding next September, some district leaders say this does not mean equity programs will be a low priority.

Sandra Lee Fewer, president of the San Francisco school board, recommended to her colleagues last month that the district put the new resources into strengthening initiatives written into the district’s 2015 strategic plan — such as academic supports to boost academic performance by learners of the English language — before starting new initiatives.

“It’s exciting when we have a lot more money, I get it,” Fewer said. “But we only have so much. I’d like to see us do what we do well, funding those things first.”

The school district’s financial planners say that most of the extra state funds are already spoken for because of projected deficits next school year. Many interest groups have already lined up their ideas for how to spend the remaining $13 million. Local unions want pay raises for all school employees while some social-justice advocacy groups are asking to tie most of the money to programs for low-income, English language learner and foster children, as suggested in the original language of the Local Control Funding Formula, passed last July in the California Legislature.

Districts with high numbers of disadvantaged students, such as San Francisco, are required to “increase or improve” services for those populations, and do so in ways that proportionally help them beyond what other students get.

But this ambiguous requirement has fueled a debate over how San Francisco can best fulfill state equity goals. Education can become unequal in a variety of ways, including the need for schools in low-income communities to use scarce resources for language education, guidance counseling and tutoring. Parent fundraising at wealthier schools also tips the scales toward inequality. (See the winter 2014 cover story of the Public Press, on the role of parent fundraising in addressing budget cuts in San Francisco schools).

Though intended to go toward “equity,” the new funding comes with enough flexibility that it can be used for a wide range of activities. The state regulations allow districts to pay for things like employee salaries or budget deficits, on the condition that they demonstrate by July how the most disadvantaged students will benefit.

Sandra Fewer and other school board members present at a February school board meeting said that after fully funding the existing programs and services, the district should use the remaining money for pay raises.

Jill Wynns, chair of school board’s budget and business services committee, said the public perceives that the San Francisco school district would have more money than it actually will. Last fall Wynns went on the record early backing the idea of increasing pay for educators. (See earlier story on the debate in San Francisco about how to spend new funding for disadvantaged students).

Wynns said she was “in total agreement with the unions that all employees need to have raises,” though she added that a districtwide salary increase would leave little money for new initiatives.

Some advocates for poor children worry that the San Francisco school leaders will not properly target these students, but instead only claim that they are improving disadvantaged students’ educational outcomes by spreading funds widely.

Spending the money too widely — for example on a new citywide physical education program — would not help disadvantaged students directly enough, saidChristina Canaveral, director of parent engagement and education policy at Coleman Advocates for Children and Youth, a San Francisco-based group that campaigns on behalf of low-income families.

John Affeldt, managing attorney and director at Public Advocates, a San Francisco-based advocacy group for low-income communities, said that if the district insists on raising teacher and employee pay districtwide with the new funds this year, it needs to be a one-time exception. Otherwise the district would lock those funds into salary increases year after year.

Leigh, the deputy superintendent, said the $13 million in undesignated funding could probably be used for salaries next school year, although the school board and unions can achieve the same goal with other funding sources. The extra state funds are likely to increase every year through 2021, and could grow by $54 million in two years, if today’s enrollment numbers remain stable.

With just $13 million to play with this year, an across-the-board salary increase will not go far in a school district with more than 160 schools, 55,550 students and a budget of $667 million. So San Francisco may have to justify the “increase or improve” proportionality requirement qualitatively, not quantitatively.

Leigh said regulations are unclear as to what qualitative measurements of improving services to use. He also said he did not know how the district could quantitatively measure a proportional increase in services for disadvantaged students. State guidelines call for San Francisco to increase or improve these services by 18 percent with total state funding for the district.

State education officials tentatively approved the reporting guidelines in January, with final regulations coming by June. The law’s flexibility is what allows San Francisco to divert some of the funds toward paying off structural budget deficits.

“Now we’re back in black,” Superintendent Richard Carranza said after Leigh’s presentation at last month’s school board meeting. “We need to decide what goes first, what to prioritize, and how to stay out of the red.”

Carranza pledged to publicly present many more ideas, along with price estimates, in the coming months. He cited two of his personal areas of concern: special education and student nutrition — which he called an “important equity lever.”

Before June’s budget deadline, school administrators and elected officials are required to gather advice from parents and students to prioritize district spending for the next three years, and urged to draw hard-to-engage parents into these discussions.

The district is going “well beyond” the level of parent engagement that the law requires, said Ruth Grabowski, coordinator at the school district’s office of family and community engagement.

Engaging parents of students that the new funding targets may be a challenge, Fewer said at last month’s meeting. Parents from disadvantaged neighborhoods like Bayview may be hesitant when the district reaches out with a brand-new promise, she said, after the school system has been unable to level the playing field for such a long time.

“In the Bayview, where we’ve broken promise after promise in that community,” Fewer said, “they’re reluctant to even have a discussion.”

For more stories on education inequities in San Francisco, see a special report: Public Schools, Private Money, from the winter 2014 print edition. Buy a copy through the website, or consider becoming a member and get every edition for the next year.