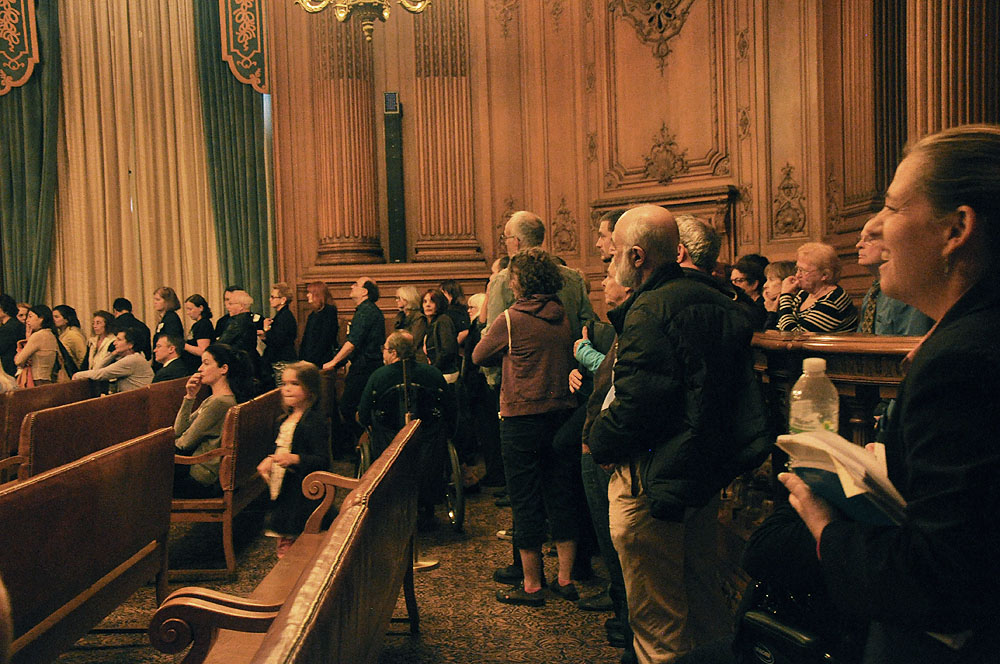 Josh Wolf, Reporter |
LikeTweet EmailPrint More
In San Francisco, medical marijuana dispensaries are banned within 1,000 feet of a school or recreational building, a restriction that puts 90 percent of the city off-limits.

Now Supervisor John Avalos is asking the city to relax the rules to so that the businesses do not remain clustered in pockets of the city known as the “green zone.”

On Tuesday the Board of Supervisors also voted to approve legislation that would limit the number of dispensaries allowed to open on the southern end of Mission Street — from Alemany Boulevard to the Daly City border. Within the proposed Excelsior Outer Mission Street Neighborhood Commercial District, a dispensary would need a permit to open within 500 feet of an existing one. Avalos said may later propose expanding that distance to 1,000 feet.

“I’m actually supportive for medical cannabis for patients,” Avalos said. “I think the green zones have created a harmful effect on the city overall. They limit access for patients seeking medical cannabis to small parts of San Francisco, and other parts of San Francisco are saying that it’s OK in these neighborhoods but not in our neighborhoods.”

Avalos said that he did not do anything to stop the three dispensaries that opened up in his district in the last year, despite urging from his constituents. Now, he said, the medical need for access to marijuana in the area is being met by the existing dispensaries. He said the problem is aggravated by the poor business climate on that portion of Mission Street. He said illegal gambling hubs have sprung up alongside the numerous liquor stores that dot the street.

“I need to be standing up with people from my district who have ben very very vocal — for now, two years — about how much we want to have medical cannabis dispensaries in the neighborhood,” Avalos said. “While it’s not easy to be doing that, I do think that it’s the right thing to do for my district.”

Both proposals passed easily, but Supervisor Eric Mar did express reservations about Avalos’ move to limit where dispensaries were allowed on the southern end of Mission Street.

“This could lead to a limiting to where people could have access to medical cannabis,” Mar said. “I think there’s a danger, too, of lumping medical marijuana with the so-called evils of liquor and gambling.”

Neighbors Call on Supervisors to Save the Marsh

Dozens of patrons and performers at the Marsh, a San Francisco theater, urged the Board of Supervisors to reject a proposed apartment building next to the performance space, located at 1062 Valencia St. They said noise from the construction would interfere with their rehearsals and performances, and worried that residents in the new apartments might try to shut down the theater over noise and activity at night.

Residents from the Liberty Hill Neighborhood Association, the group that filed the appeal, said the developers failed to show that the project would not have any environmental impacts. They said that constructing 12 housing units without any parking would create additional strain on the limited street parking. The development is not required to have any parking on site because it is located in a transit-rich area. But the neighbors point out that this does not guarantee the new tenants will come car-free. They said this problem would be compounded with each new building constructed without parking.

Supervisor Scott Wiener, whose district includes the proposed project, said that although he was sensitive to the concerns of neighbors, the issues were separate from the environmental impact.

Supervisor David Campos, whose district border is across the street, disagreed. He said the developer failed to account for recent changes in the neighborhood, and that the developer needs to address the the lack of parking.

The neighborhood association’s appeal did not garner the votes it needed to pass, but it will move on to the Board of Appeals for another chance to slow the development.

City Parks to Close From Midnight to 5 A.M.

In an effort to combat vandalism and illegal dumping in parks throughout the city, the Board of Supervisors narrowly approved a plan to close the parks at night. But the supervisors who opposed the change warned that it could lead to selective enforcement and racial profiling.

Wiener, who introduced the ordinance, said San Francisco was the only major city without established open and closed hours for parks. He said vandals were responsible for $1 million in damage each year, and that the measure wasn’t created to evict the thousands of homeless sleeping in city parks each night.

“It is already illegal to sleep or to camp in parks,” Wiener said. “If they wanted to do that they already have the tools to do that.”

But Supervisor London Breed said that the acts Wiener intends to stop are also already illegal, and that the problem is one of enforcement and not regulation. She said she was sympathetic to her constituents, who say they should be allowed to use the parks they pay for at whatever hour they choose.

Breed also said she had been told that businessmen going for a jog at 4 a.m. or young couples on a stroll after midnight would not be targeted by the new law. “It won’t be enforced against them, which is exactly my problem, that this will be selectively enforced,” Breed said. “I’m not comfortable with the idea that we should pass a law that will be selectively enforced.”

Supervisors Jane Kim and John Avalos said they use the parks outside of the proposed hours themselves. Avalos compared the ordinance to New York City’s policy of stop-and-frisk in that it selectively targets youths and people of color.

“I think its actually disrespectful to members of this department to say, ‘We’re gonna pass a law but we don’t mean that the law be enforced the way that its written,’” Campos said. “We owe it to our police department to make sure that when we pass a law, that the law is as clear as possible, and when we say enforce the law we mean enforce every aspect of the law.”

The Board of Supervisors approved the new hours, after adopting an amendment by Avalos that eliminated a section empowering general managers of parks to close them in the case of civil unrest or other emergencies. They also adopted an amendment by Kim to ensure that those caught sleeping in the park would be punished only under existing regulations. Supervisors David Chiu, Malia Cohen, Mark Farrell, Katie Tang, Scott Wiener, and Norman Yee voted for the new park hours.

“The ordinance is mean-spirited because it will impact so many human beings who have nowhere to go,” Mar said. “We should not be passing a mean-spirited ordinance like this that treats people like they do not exist.”

City Updates Polices to Include Video Productions for the Web

Although low-budget films and television programs shot in San Francisco are required to pay various fees to the city, production companies are allowed to recover that money from the city if the projects meet certain conditions. Until now, Web videos were excluded from participating in the rebate program, but Supervisor Farrell has introduced an ordinance to update the code so that productions intended to be watched online are included.

The ordinance would also reduce the daily fee required by the city’s Film Commission from $100 to $50 for film and television projects with a budget of under $100,000. Web video productions are still required to pay a daily fee of $200.