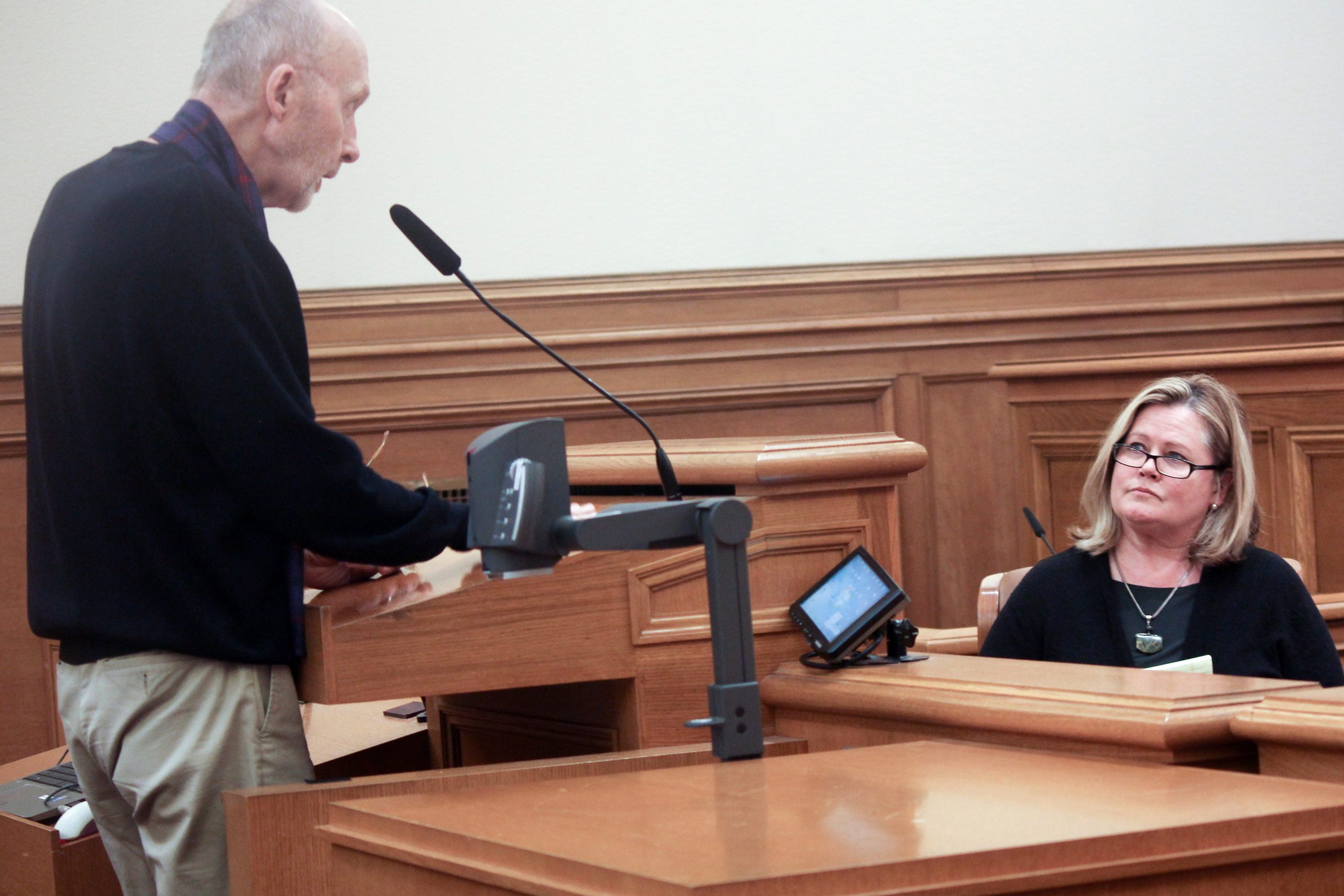 Charles Marsteller, one of the authors of the ballot measure’s authors, speaks at a meeting of the San Francisco Ethics Commission while LeeAnn Pelham, the commission’s executive director, listens. Photo by Noah Arroyo / Public Press

The San Francisco Public Press spent months investigating campaign finance in local elections for a special report set to appear in the summer print edition, due out Aug. 10. This story builds on reporting from that project.

If voters approve, businesses and individuals with deep pockets will lose some tools that have been used to curry favor with San Francisco politicians and officials.

The San Francisco Ethics Commission has voted unanimously to put a proposition on the November ballot that would restrict certain lobbyist behaviors that create, or appear to engender, a quid-pro-quo relationship between them, their clients and the elected or appointed officials they seek to influence. With the commission’s July 25 action, about 25 local measures are expected to appear on the ballot. The final tally is not yet known.

The proposed law’s authors — the Friends of Ethics and the San Francisco chapter of Represent.Us — say that this is merely one in a series of forthcoming reforms intended to make government more transparent and accountable to voters. The groups hope to build on the momentum of the 2015 passage of Proposition C, which for the first time required a new category of lobbyists to register with the city.

As of Monday, 156 lobbyists were registered with the Ethics Commission.

If voters pass the measure this fall, beginning in 2018, lobbyists representing private interests in San Francisco would have to notify City Hall ahead of time when they planned to lobby specific city agencies, such as the Board of Supervisors, the Mayor’s Office or the Planning Department. And during elections, lobbyists could no longer give personal contributions to candidates running for office in those agencies, or deliver contributions on behalf of their clients or anyone else — a practice known as “bundling.”

The Ethics Commission would use $115,000 from the city’s General Fund to update the registration process, which would cost an estimated $5,000 per year to maintain. As they do now, lobbyists would have to pay $500 annually to maintain their registration.

The proposition would also ban all lobbyists from giving gifts, including travel gifts, to city and county officials or their family members. A lobbyist can currently give a city employee up to four gifts per year if each is worth $25 or less. Reporting these gifts is not required, however.

‘An easy win’ — with caveats

Morgan Aitken-Young, who founded the local chapter of Represent.Us, called the proposition “an easy win” because “it aligns closely with state law.” Lobbyists and firms who lobby state officials are currently not allowed to give more than $10 worth of gifts per month, and they cannot contribute to or bundle on behalf of sitting politicians and candidates for agencies that they actively lobby.

Aitken-Young was elated at the commission’s vote. “It’s really exciting,” she said, “it’s been a year of work.”

Friends of Ethics member Charles Marsteller said he aimed to outlaw all bundling, and to regulate other behavior like candidate fundraising outside of election years.

“We can start with lobbying,” he said. “We’re taking small steps.”

Lobbyists who broke these rules might face fines of thousands of dollars per violation, said LeeAnn Pelham, executive director of the city’s Ethics Commission. The amount of each fine would depend on the severity of the violation.

There is, as usual, a loophole.

If lobbyists timed their personal or bundled contributions precisely, they could lobby newly elected politicians immediately after delivering cash to their campaigns, thus ducking the ballot measure’s intent of cutting back money’s influence on politics. The only requirement: That the lobbyist had not lobbied the victorious candidate’s agency within the previous 90 days.

Bundling represents a workaround for lobbyists who want to fundraise huge sums for candidates without being thwarted by the city’s per-person contribution limit of $500.

But District 3 Supervisor Aaron Peskin, who lauded the proposition’s underlying goals, said that as far as he knows, lobbyists rarely bundle strategically this way. And the ones who do are likely to raise money for the mayor and his cadre.

“Analyze my race, for instance. Where did every lobbyist dollar go? They went to the incumbent,” Peskin said, referring to Julie Christensen, his opponent in the 2015 election.

All told, campaign contributions totaled $235,124 in the 2015 election. Peskin, who retook the District 3 supervisorial seat from Mayor Ed Lee’s hand-picked ally, raised $4,800 in contributions, outpacing candidates in the comparably lower-profile Community College Board race as well as those running unopposed in other races.

By comparison, Lee’s own re-election campaign took in $171,824, with 93 percent of that money coming from just seven registered lobbyists, according to Ethics Commission records analyzed by the Public Press. Alex Tourk, a former City Hall insider who runs the lobbying firm Ground Floor Public Affairs, bundled $66,524 for Lee, the election’s biggest bundle. Tourk also bundled $21,500 for Christensen, constituting two-thirds of her total contributions.

A representative at Ground Floor Public Affairs declined to comment for this story.

After Lee and Christensen, the third largest sum of contributions went to Lee-backed sheriff candidate Vicki Hennessy, who defeated incumbent Ross Mirkarimi. Two-thirds of her contributions were bundled by Karin Johnston, of HMS Associates; Janan New, of the San Francisco Apartment Association; and Mary Jung, who represented the San Francisco Association of Realtors. Jung also bundled $6,650 for Christensen.

Sam Lauter, lobbyist at BMWL & Partners Inc., bundled $38,850 for Lee’s re-election campaign. He was the second biggest bundler after Tourk.

“There’s no question that there are people in my line of work who use it as a tool to engage deeper with elected officials,” Lauter said, referring to bundling. “I’m not being naive.”

But he said he did not personally know anyone who bundles with that agenda. And when he bundles, he said he does it for candidates he believes in.

“My focus tends to be, I like this person, I like what they stand for,” Lauter said. In the 2015 election, he gave the maximum personal contribution to both Lee and Peskin, who are longtime political rivals.

Lauter was unfazed by the possibility of facing new restrictions.

“The rules are gonna be what the rules are, and I’ll follow them,” Lauter said. “It’s really that simple.”

The proposition is a local tailoring of the nationally focused agenda found in Represent.Us’ American Anti-Corruption Act. The good-government group says it has more than 620,000 members in 25 local chapters across the nation.

The ballot measure received almost no public opposition. But at the commission’s July 25 meeting, Anita D. Stearns Mayo, an attorney who specializes in campaign finance law for Pillsbury Winthrop Shaw Pittman LLP, called a ban on bundled contributions unnecessary because they “are subject to detailed disclosure requirements on the lobbying reports already.” She also cited a federal court case, Green Party of Connecticut v. Jeffrey Garfield, as a precedent that such a ban would violate the First Amendment.

After the Ethics Commission voted to put the proposition on the ballot, the audience erupted into applause. The commissioners then commended the proposition’s authors.

Vice Chairperson Peter Keane praised Represent.Us, whose members were predominantly in their 20s and early 30s.

“The most refreshing thing to me is to see the vibrancy of a bunch of young people, coming forward on good-government measures. There are other organizations like Friends of Ethics and the Civil Grand Jury. For the most part, most of those folks have hair like mine,” said the ivory-haired Keane.