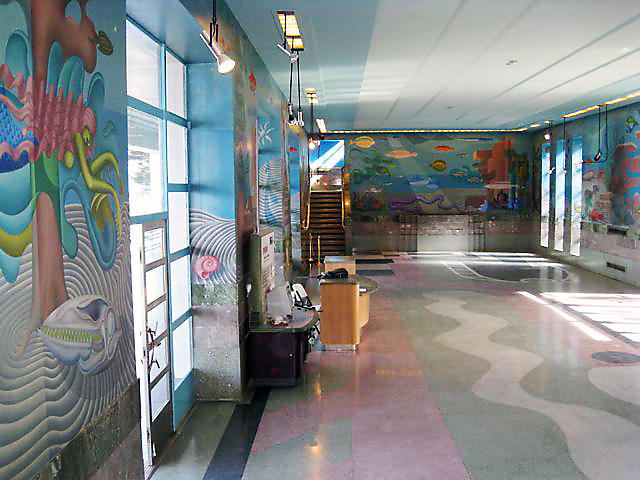 Among the many restored pieces include those by Hilair Hiler and Sargent Johnson. Photo courtesy of historian Gray Brechin.

After decades of battling water leaks, the Aquatic Park Bathhouse Building at the San Francisco Maritime National Historic Park, home to a collection of unusual New Deal-era art, is emerging from a rehabilitation project with a noticeable facelift.

The Bathhouse, built in 1939 by the Works Project Administration to resemble the bridge of a passenger ocean liner in the Streamline Moderne style, has no architectural parallel in San Francisco. It became the park’s Maritime Museum in 1951 and is teeming with sea-themed art, none more striking than Hilaire Hiler’s “Undersea Life’’ mural.

That mural, which has dominated the building’s first-floor lobby walls with a dreamy underwater scene since 1938, underwent an eight-month restoration that was finished earlier this year as part of the Maritime Aquatic Park Rehabilitation Project. The lobby re-opened in June with ship models and displays relocated from the second floor.

The canvas panels on which the mural is painted were removed and cleaned and touch-up painting was carried out in sections that had been waterlogged or destroyed over the years.

The project also repaired the Bathhouse’s leaking roof and windows and extended elevator service to the third floor. Structural repair of the public amphitheater bleachers that spill out onto the Maritime Park’s undulating lawn should be finished late this summer.

Funding for the rehabilitation project — $13.8 million for the roof, windows, elevator and bleachers — came from the National Park Service’s line item construction program, an appropriation separate from the department’s day-to-day operating costs.

Park ranger Thomas Jares took in a view of the murals after giving a daily tour of the museum, located at Beach and Polk streets. The dazzling range of sea colors shone brighter and cleaner than in years past, making the trove of sea creatures and merman suspended in kelp more alive.

“The before and after is very striking,” he said, pointing to his favorite features. “There is a certain symmetry to all of this. That mermaid corresponds to the merman on the other side of the lobby, and that shaft of light corresponds to another across the hall.”

Much of San Francisco’s New Deal art is politically charged, but the art at the Bathhouse is unusual because it is strictly sea-themed and apolitical. The tropical sand-colored murals that adorn the men’s restroom and the stainless steel porthole door handles suggest a preoccupation with anything nautical, and “Undersea Life’’ is far from any realism. The mermen and swaying seaweed are surreal.

However, the art has a tenable relationship to politics because of the government patronage that was its life source. In era of deep national hardship, the WPA building and the murals became, in many ways, a lifeline for the laborers and artists who shaped them.

Their renovation is a symbolical gesture and a practical invitation to examine again the value of public art.

The WPA “had a very big idea of what civilization is,” said Gray Brechin, a historical geographer and founder of California’s Living New Deal Project. “The whole idea was to embellish the lives of people, to uplift them. And at the same time to put a lot of people to work.”

“I always thought that the Depression was depressing, like living in the Richmond District under the fog, which I did for years,” he added. “In fact, in the years I have been studying this I have realized that it was a very hopeful time. It really inspired leadership that people felt cared for them.”

Like “Undersea Life,” other pieces of art at the museum are worlds away from dustbowls or destitution. Sargent Johnson, an admired African American artist and San Franciscan, laid down the glazed tile mural “Sea Forms” on the Bathhouse’s rear façade. “Seal” and “Animal” are two sleek, modern red and black granite sculptures by another local, Beniamino Bufano. And Hiler painted “Psychological Color Chart; Dr. Oswald’s Color Solid,” essentially an expansive color wheel, on the west wing’s ceiling.

Allowing Johnson a prominent piece of art on a large scale, according to Brechin, was a significant tribute to him and the African American community. Likewise, Brechin said that WPA projects should also be remembered for efforts in gender and racial equality. Almost half of the artists who worked for the WPA were women, and room was made for Chicanos, American Indians, Asians and African Americans.

The Bathhouse’s second floor boasts more nautical imagery by Richard Ayer and displays and models that have not changed in 40 years, but that area is closed until funds — about $1 million — can be found for its restoration. Larger ship models have been moved downstairs to bask in “Undersea Life’s’’ marine glow, while the rest will be redesigned to create smaller rotating exhibits to populate the lobby and space elsewhere in the building.

Jares, who has been a ranger for 17 years, said most visitors to the Bathhouse ask what an amorphous tile design in “Sea Forms’’ is meant to represent.

“It looks like a submarine or a shark or both,” he said. “I don’t think Johnson really meant for it to be either, and here we are trying to figure it out. Artists are like that — in their own way, they want to be remembered.”

Gianmaria Franchini is a freelance writer and journalist who specializes in culture and arts. His writing has appeared in GT Weekly, SF360.org and NOVO magazine. He has contributed research and writing for stories on public health in Alameda County, underground farmer's markets, and public art for the SF Public Press. He has a degree in Literature from the University of California, Santa Cruz, where he edited the Arts desk for City on a Hill Press. He lives in Oakland.