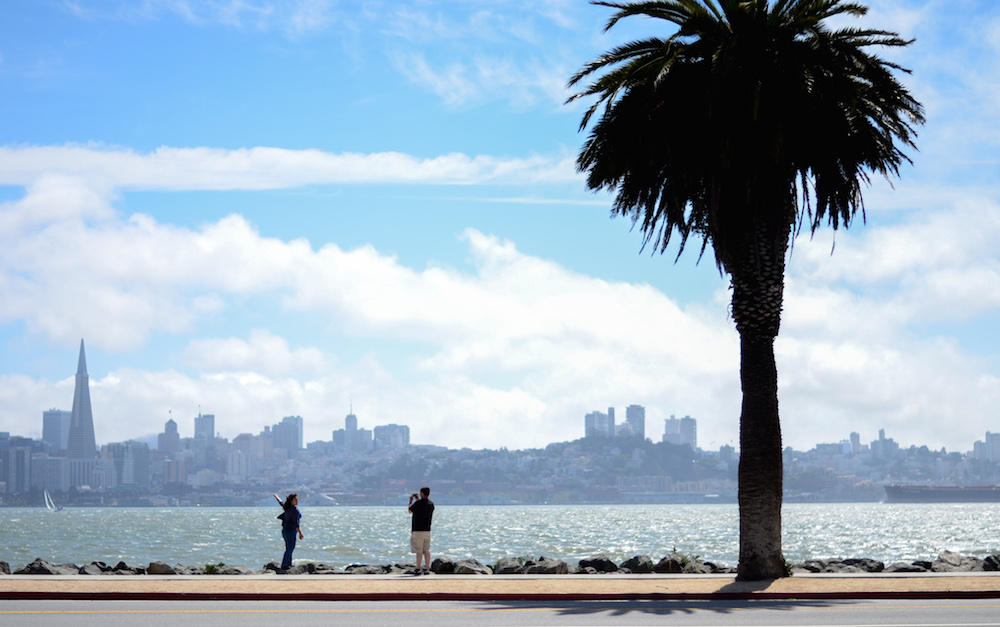 Developers have started construction on what will eventually be a residential neighborhood of 8,000 homes on Treasure Island. Regional planning agencies warn that much of the 300-acre site in San Francisco Bay is likely to be permanently underwater — unless the waterfront is fortified with levees and seawalls. Photos by Peter Snarr // San Francisco Public Press

Understanding the sociology and politics around word ‘retreat’

San Francisco is partway through a years-long process of proposing elaborate — and incredibly expensive — engineering fixes to the looming prospect of sea level rise. But the current sketches of a future city buttressed by dikes, levees and seawalls, which could cost tens of billions of dollars over coming decades, overshadow an increasingly accepted alternative: moving away from the waterfront.

Some experts in climatology, urban planning and demographics argue that physical barriers offer only the illusion of protection and that cities should accept that some neighborhoods will need to be abandoned.

Karen O’Neill, a Rutgers University sociologist who studies “climate migration” worldwide, argued that city planners should entice people to move away from vulnerable areas where flooding could be exacerbated by climate change.

The “protect your way out of the whole thing” approach is folly, she recently told an energy reporter at Bloomberg View.

While O’Neill declined to use the word “retreat” in her research, Klaus Jacob, a research scientist at Columbia University’s Lamont-Doherty Earth Observatory, used that kind of language liberally regarding his hometown, New York City. In an interview with New York Magazine’s Andrew Rice, Jacob said city officials should not be allowing development in areas that will see dramatic flooding in just a few decades. Rice wrote:

“I have made it my mission to think long term,” Jacob said. The life span of a city is measured in centuries, and New York, which is approaching its fifth, probably doesn’t have another five to go, at least in any presently recognizable form. Instead, Jacob has said, the city will become a “gradual Atlantis.”

Rice suggested that by the end of the century, many of the new waterfront developments in Brooklyn, Queens and Manhattan would increasingly be flooded and rendered unusable, as they were dramatically in Hurricane Sandy in 2012. Rice wrote:

As an example, he cited the Hudson Yards development, just one of many waterfront megaprojects that the city has continued to enthusiastically promote, even after Sandy. He thought that the government should instead rework its policies to relocate assets away from the water.

But Rice cited another researcher who said that approach was unrealistic — “because the land that we would need to retreat from happens to be worth hundreds of billions of dollars.”

A ban on waterfront development would also be impossible politically: The real estate industry practically owns City Hall, through its campaign contributions and large economic footprint. … Voters are attuned to what might harm their property values or quality of life next year, but not the high societal cost of bailing out unwise development projects a few decades down the line.

Here on the West Coast as well, water threatens to subsume much of the urban shoreline. San Francisco Bay is rising, and city officials have officially adopted climate scientists’ scenarios, the “most likely” of which is that permanent flooding will reach 3 feet above current high tide by the end of this century. Models developed by the San Francisco Public Utilities Commission in 2015 show occasional flooding as high as 8 feet above current high tide during bad storms.

In early 2016, studies of ice melt in Antarctica push that worst-case prediction to as high as 9 feet.

A 2015 data-driven investigation by the San Francisco Public Press found that since 2010, city officials have approved new homes, businesses and other development on nearly 50 waterfront parcels below the 8-foot level. This includes Treasure Island, a new basketball arena for the Warriors and mega-developments at Mission Rock and in Hunters Point.

Around the bay, according to planning documents from cities and press reports, at least 27 large developments were approved or under construction on thousands of acres of prime waterfront land that could be underwater by 2100, totaling more than $21 billion in development costs.

And yet the city seems to be doubling down on San Francisco’s southeastern waterfront as the place for a massive amount of new development. The Southern Bayfront Strategy encourages developers to build 20,000 new homes and up to 5 million square feet of offices on open space in Mission Bay, Dogpatch, Hunters Point, Candlestick Point and other neighborhoods on the city’s eastern waterfront.

Even if society mitigates sea level rise by reducing emissions, the water of the bay could threaten these places. Early plans for the construction of a seawall to protect Mission Bay are already circulating in the offices of the city’s top planners.

O’Neill, the Rutgers researcher, did not argue that society give up on the shoreline altogether. She said the word “retreat” seems to “indicate defeat” and discourage coastal communities from proactively engaging with the problem. Instead, she said, city planners should focus on developing attractive spaces inland so that people have a reason to move to higher ground.

Environmental consultants for San Francisco have offered one proposal that would turn Mission Creek into a lagoon around which housing could be built.

“There’s been an ongoing war that dates back at least 200 years between people who favor building engineered structures versus critics who say you’re overpromising,” O’Neill said. “That’s the ‘protect’ strategy — it can be a wall, which is what most people are familiar with. Almost always, that’s the top preference; it sounds good.”

But levees are effective only until they fail. Will local governments encourage people to move away from rising waters? “I think it’s going to be town by town — some concerned mayor or emergency manager who just decides this is what they’re going to do,” O’Neill said.