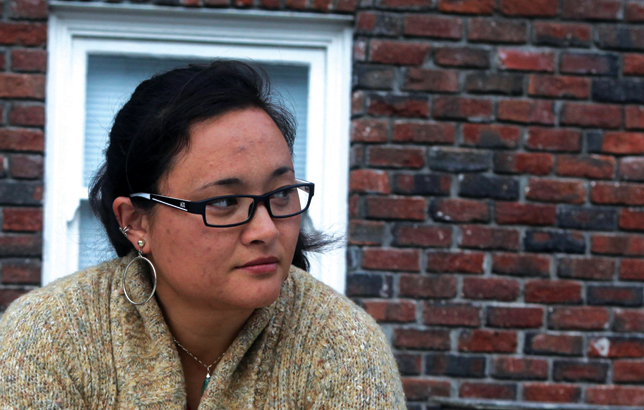 Orchid Pusey said one of the Asian Women's Shelter's core values is to look for those who have been forgotten or left out. Photo by Audrey Whitmeyer-Weathers/SF Public Press

Orchid Pusey, interim director of the Asian Women’s Shelter in San Francisco, says cultural differences can have a big influence on the attitudes and responses to domestic violence. She talked with San Francisco Public Press reporter Ruth Tam about the challenges facing service providers in the city.

What’s your background in the field?
I’m in my 11th year at Asian Women’s Shelter as a staff member. Before that I was a volunteer and a language advocate where I did bilingual advocacy and interpretation with English and Mandarin. When I became a staff member, I spent eight years as the national network coordinator. I’ve been the interim executive director for about two years now.

How do you gauge your success?
There’s the measurable and the immeasurable. For the measurable things, we do all of our intakes and exit surveys so that our evaluation methods have quantitative measures of success. We think of independence as people choosing the next step in their life. When we say our percentage of success is at 80 percent, we mean that 80 percent of our clients move on to that next step. Some people want to go back to their old living situation. If that happens, we want to make sure it’s because they chose it, not because they had no other option. To us, success is having options and choosing one that is violence free and self-sustainable.

How is your job different from someone’s who works at a non-cultural domestic violence shelter?
One of AWS’ core values is to always look for who has been forgotten or left out. At the shelter, we ask each resident to make a list of food that they’d like us to pick up. We realize that getting the right kind of rice, melon or green might sound trivial, but picking the right kind of green can be a step to ending domestic violence. If a survivor needs to heal, they need to heal somewhere safe. If ‘safe’ means a certain kind of green, we’ll buy that green whenever that survivor writes it on our list. When other shelters are just, “wham, bam, get it done” with restraining orders, police reports and transitional housing, it just treats someone like an issue. People aren’t issues.

How have you seen culture hold someone back from fighting domestic violence?
There’s a famous 1989 case where the defendant justified a murder for the “defense of traditional Chinese values” and got five years of probation. Last year, there was a very similar case here with a Vietnamese family. It was an extremely horrific murder. They used the same defense of protecting Vietnamese masculinity. It didn’t work, but people still use culture to defend what they’re doing. Every culture has patriarchy in it and ways that people use it to condone violence. But every culture has a history of resisting violence.

What are the challenges that come with working with someone from a similar ethnic background?
It can help to talk to someone as the same background as you, but it can also be really hard. You still have to talk to them about their culture. Someone will say, ‘Oh, you know how it is for us.’ But it’s not like you know what that means just because you’re from the same country of origin. You still have to ask. A lot of times, when people say, “You know how it is in our culture,” what they really mean is ‘This is how it was in my family. This was my experience.”

Is there a domestic violence issue that you’ve seen swept under the rug or underreported?
During the Mirkarimi trial, I was worried the community at large would misunderstand the role of domestic violence agencies. La Casa de Las Madres put out that big billboard that said “Domestic violence is never a family matter.” And the same billboard company offered us an opportunity to put up a similar message in Japantown or Chinatown. They kept pressuring us to turn it in, but for the communities that we serve, that message wouldn’t have translated well.

Why is that?
Asian communities are in different places. Not every group is at a place where they can read a sentence like that and feel empowered. Some people might read that and think that if they tell a friend about abuse, their friend is going to tell the police and the media, and their whole life is going to be public. I want people to know that in San Francisco, if you choose to get support as a domestic violence survivor, you aren’t forced to file a police report.

How do you see the response to domestic violence evolving in the next 10 years?
One of the main things AWS wants to do is open a public center that’s about a new way of life. It would be part of the community where everyone who goes there is connected to a bigger vision of nonviolence. I don’t think we can end violence. We’re human beings and sometimes we’re nature at its worst. But when we’re at our best, we can make sure that when violence happens, we can address it immediately and repair it.