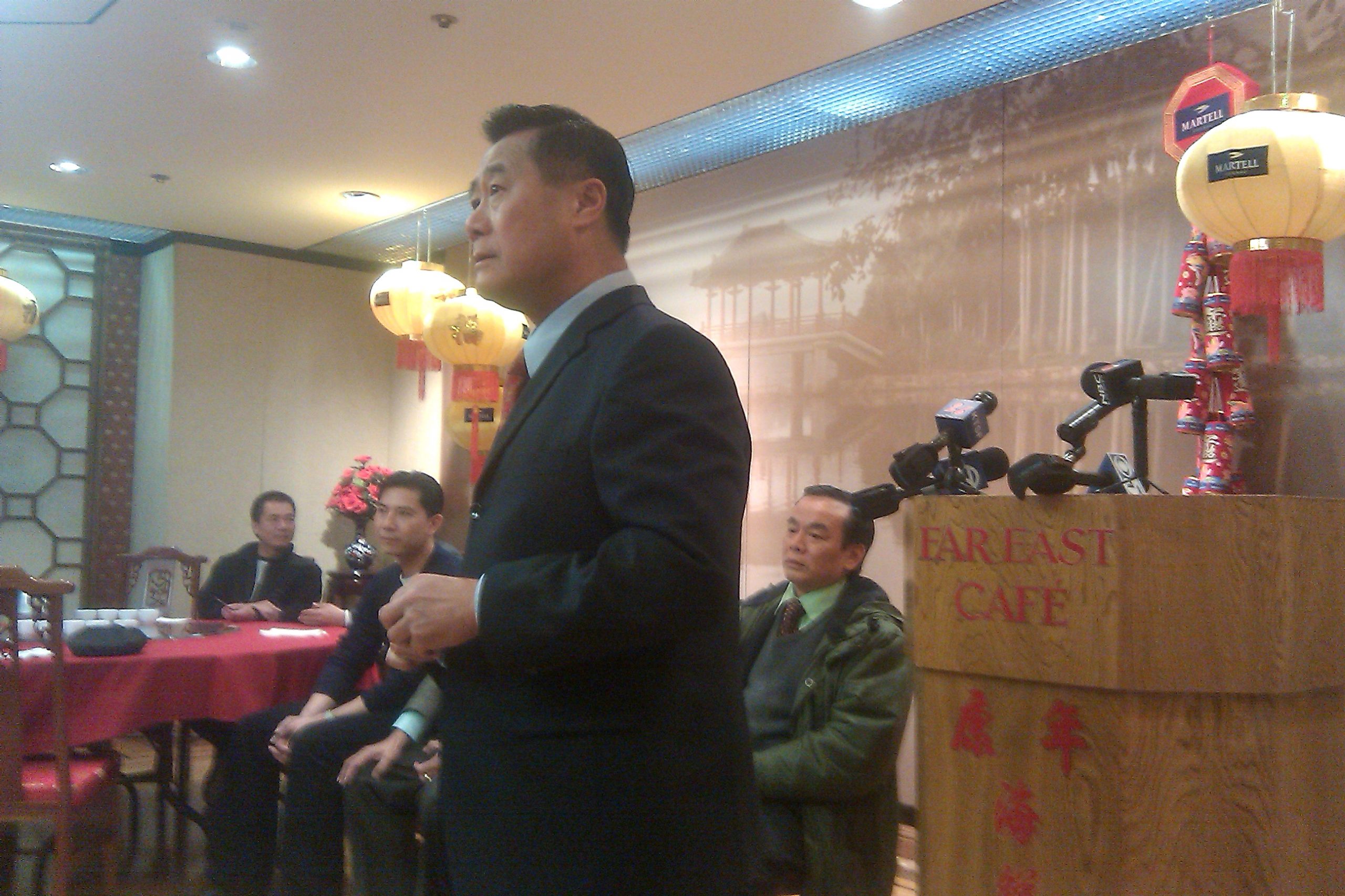 State Sen. Leland Yee (D-San Francisco) says he is against the proposed ban on the sale, possession and distribution of shark fins in California. He says the legislation is an attack on Asian culture and cuisine. Photo by Jerold Chinn / SF Public Press.

A proposed ban on the sale, possession and distribution of shark fins in California has been introduced by Assemblymen Paul Fong (D-Cupertino) and Jared Huffman (D-San Rafael),  much to the dismay of some Chinese restaurant owners.

The ban would prevent fishermen and distributors from acquiring and distributing shark fins to restaurants who use the fins to make shark fin soup, a Chinese delicacy, costing around $15 to $75 a serving.

“Current laws that ban the practice of shark finning are insufficient when we have species of sharks depleted up to 90 percent.” said Fong in a statement. Current state law states that a shark may not be hunted just for its fins and thrown back.

State Sen. Leland Yee (D-San Francisco) blasted the legislation at a San Francisco press conference, saying the solution is “overreaching” and “insensive to the Chinese culture.”

In a telephone interview, Fong said Yee’s remarks were offensive,  saying he practices the Chinese culture in his own home every day. “I’m not attacking the culture," Fong said. "I’m attacking the finning.”

He said the problem is increasing at an alarming pace.

“The demand for shark fin is growing and the worldwide shark population is depleting to extinction rates. I say it is time to remove shark fin from the menu,” he said.

Representatives of several Bay Area Chinese restaurants were at the press conference with Yee, a candidate for San Francisco mayor, to oppose the bill. They said their restaurants do not acquire shark fins illegally and that opponents should focus their attention on those fins caught illegally.

“This would be a huge jeopardy to Chinese restaurants,” said Michael Ou, chef at The Kitchen in Millbrae.

Ou said if the ban does take place, he would have reduce staff at his restaurant. “A lot of workers would affected not just in the restaurants, but also the fishermen as well,” said Ou.

Those backing the ban held their own press conference at the California Academy of Sciences, saying that when a shark loses its fin, it’s similar to a human losing a limb and that the sharks bleed to death.

David McGuire, a researcher at the California Academy Sciences and director of the nonprofit Sea Stewards organization that promotes shark conservation, said that sharks play a very significant role in the ecosystem.

“They balance the fish population to make sure there’s no overabundance of one species over another,” said McGuire. “They are they regulators of the food system.”

McGuire says he has been researching DNA of the sharks that were purchased in San Francisco and found many of the species were endangered.

“Often the vendor does not know what species they are or where they came from,” said McGuire.

Peter Knights, executive director of WildAid, a nonprofit organization that campaigns to end illegal trade in wildlife, said education is the key putting a halt to shark finning.

WildAid aired ads in Beijing, featuring basketball star Yao Ming, to show the affects of killing the sharks just for their fins.

“We plan to have billboards and public service announcements in San Francisco,” said Knights. “We have already reached out to over 100 restaurants in the city by sending them information on shark finning and some of the restaurants have actually stopped serving the dish,” he said.

At the end of Yee’s press conference at the Far East Restaurant in San Francisco’s Chinatown, soup was dished out for reporters to see how how shark fin soup looks when served to patrons.