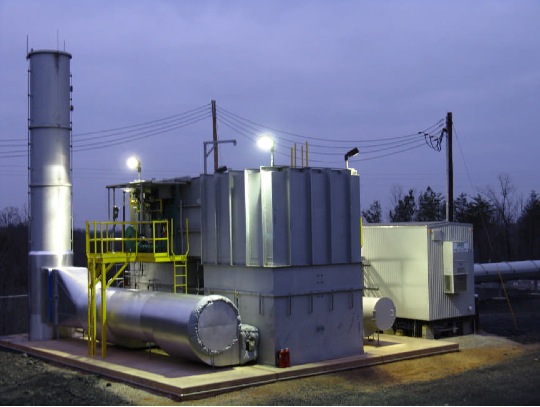 California regulators are considering a plan to allow companies that capture methane from coal mines to sell carbon "offset" credits to major polluters in the state. One of the first projects using this technology is a facility in Alabama installed by a company called Biothermica. Image: Biothermica.com.

California regulators are weighing plans to make it easier and less expensive for oil refineries and other big industries to comply with the state’s new cap-and-trade system for cutting greenhouse gas emissions, and environmentalists are alarmed.

At a hearing last week in Sacramento, the California Air Resources Board heard staff proposals to amend the year-old cap-and-trade program to extend “transition assistance” to industry through 2018.

The change, coming on the heels of lobbying from industry, would give businesses possibly hundreds of millions of dollars worth of free allowances to pollute, and alter the economics of the emerging auction market for carbon.

The Air Resources Board also considered a controversial proposal to reward the capture of methane emissions from coal mines by including it as a tradable “offset” credit under cap-and-trade. Environmentalists said this plan could encourage the expansion of coal mines, undercutting federal air quality and climate goals.

The cap-and-trade system is a key piece of California’s closely watched Global Warming Solutions Act of 2006, which required the state to reduce its greenhouse gas emissions to 1990 levels by 2020. The law requires utilities, refineries, manufacturers, farms and other industries that emit large amounts of carbon dioxide and other greenhouse gases to abide by a cap on those emissions, or trade pollution allowances and offsets to meet their caps.

The exact regulations have changed over time, and the process has been subject to lobbying. Read “Years of Lobbying Helped Transportation Fuels Industry Win Exemptions From California’s Climate Rules.”

(Read other stories from the Public Press’ team report on cap-and-trade from the summer edition here: https://sfpublicpress.org/climatechange.)

Under cap-and-trade, an “allowance” represents permission to emit one ton of carbon dioxide or the warming equivalent of other greenhouse gases. Covered companies, government agencies and regulated utilities can trade allowances at auction. Businesses that cannot easily reduce emissions can buy allowances from those that have cut beyond its mandated cap. Regulated entities can also buy offsets — credits preapproved for greenhouse gas reduction activities such as reforestation.

But to get the cap-and-trade system started last year, the Air Resources Board gave large industries allowances covering 100 percent of their current emissions, anticipating that they would start planning and retrofitting operations to reduce emissions at a rate of 2 percent per year, matching the gradually declining cap.

Some environmental groups said the proposed extension of free allowances through 2018 would diminish cap-and-trade’s ability to cut greenhouse gases.

“We are deeply troubled by the staff’s proposal to extend transition assistance for the industrial sector in the absence of evidence indicating continue assistance is needed,” wrote the Greenlining Institute in a letter objecting to this proposal.

Alex Jackson, an energy attorney for the Natural Resources Defense Council, estimated that the extension “is in the neighborhood of $1 billion in allowance value by 2020, with the lion’s share earmarked for the cash strapped oil industry.”

Jackson noted that the oil industry in California, while complaining about cost of the program, “somehow had $43 million to lobby Sacramento” about cap-and-trade.

A letter from the Environmental Defense Fund to the board called the oil industry hypocritical. “Certain sectors like the petroleum refineries simply don’t need continued assistance,” the letter said. Representatives from the Sierra Club also spoke against the amendment.

The oil industry argued for months that California refineries would be at a competitive disadvantage under cap-and-trade in because they would have to spend money to change operations to emit less carbon, while out-of-state competitors would not. Not only could refineries in other states sell cheaper petroleum, they also could wind up selling more of the dirtier. The staff of the Air Resources Board would appear to have agreed with that economic assessment.

Representatives from Chevron, Shell and the Western States Petroleum Association on Friday thanked the Air Resources Board for the amendments.

“Chevron is very pleased with many of the proposals,” and assistance should recognize the competitive landscape, Chevron spokeswoman Julia Bussey said.

Environmental organizations also expressed alarm about the proposal to allow methane capture from coal mines as an offset for California polluters under cap-and-trade. They said the change could spur expansion of coal mining in other states, where environmental regulations are less extensive.

The proposal “would create a new, previously unavailable revenue stream for mining companies,” the Sierra Club warned. “This has the potential to make coal mining profitable in places where it would otherwise not be economically viable.”

Methane is the second-largest source of greenhouse gas emissions after carbon dioxide in the U.S. Nationwide, coal mines released 89.3 million metric tons of methane in 2011, according to the federal Environmental Protection Agency. Just over one-fifth of the methane was captured and destroyed, while the rest was vented into the atmosphere.

The regulation of the burning of coal for power is less contentious. Over 10 years, California has set stringent limits on greenhouse gas emissions from new power plants, a move that essentially bans new coal plants. In-state coal-fired electricity generation amounted to less than 2 percent of total supplies in 2010.

Under California cap-and-trade, regulated industries will be able to use offsets from non-regulated companies to cover up to 8 percent of emissions. But analysts say offsets could potentially far exceed that figure under some economic projections. (See

Methane capture proponents said revenue from the offsets would go primarily to technology and energy companies that develop and manage the projects, not to big coal companies.

But environmentalists said giving coal companies a new revenue stream from methane capture could encourage them to grow their mining operations.

The protocol would capture methane released from underground mines for safety reasons, and would not encourage additional venting, Michael Cotes, president of Colorado-based Ruby Canyon Engineering, told the board.

Environmental groups and academics said more research needed to be done to confirm that the protocol would not make coal production more profitable.

Air Resources Board member John Balmes said he was conflicted about the plan. He endorsed the American Lung Association’s opposition to coal production.

“Coal kills tens of thousands of people a year around the world,” he said.

But Balmes said he would likely support the mine methane protocol because the capture technology would help reduce overall emissions.

Saying that there were “a lot of numbers flying around,” Mary Nichols, chairwoman of the board, said the proposal needed to be refined. Among other things, the staff need to provide more evidence the plan would not encourage coal mining expansion.

An updated proposal is expected early next year.

In yet another concession to energy companies, the Air Resources Board will consider changing the way it measures carbon emissions from oil refineries. The plan is to use a proprietary formula created by a consultant to the Western States Petroleum Association, the major petroleum industry group in California.

Instead of each ton of carbon dioxide emitted, refinery emissions would be measured as “complexity-weighted barrels” an intricate formula that takes processing into account. It was devised by the Dallas-based consulting Solomon Associates.

But few in attendance last week said they understood how the new measurement would really work.

“We do have concerns about a formula which relies on proprietary data we don’t have access to,” said Jackson of the Natural Resources Defense Council.

The formula calculates CO2e — carbon dioxide equivalence — emissions based on what the consultant calls “detailed energy balance data.” That differentiates energy types for fuel components such thatsomemay be imported, exported or produced, and data that take into account the process for producing the fuels.

By hearing the proposed amendments Friday, the Air Resources Board began a 15-day comment period for stakeholders and the public. The board will vote on the proposals in the spring.

For more stories from the Public Press’ team report on cap-and-trade in the summer edition, see https://sfpublicpress.org/climatechange.