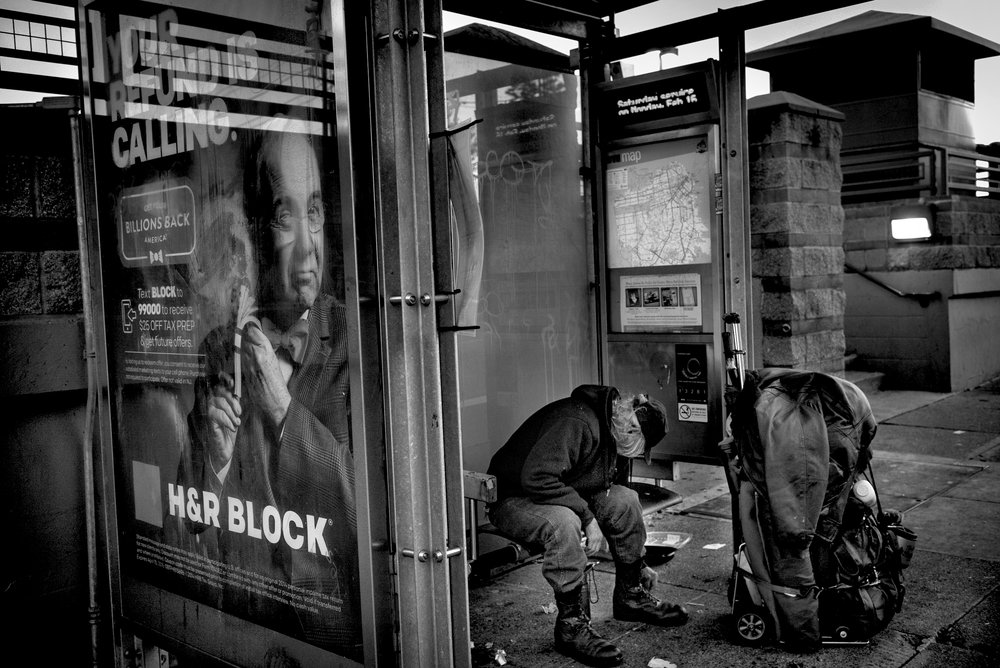 An unhoused man takes a moment to rest in a bus shelter in San Francisco on Feb. 12, 2015. Photo by Robert Gumpert.

When photographer Robert Gumpert resumed taking pictures after a hiatus, he didn’t set out to create a book. He was just out of practice.

“I started going out on the street to learn how to take pictures again,” Gumpert said.

In search of a project, he started wandering around San Francisco. Gumpert had produced a previous series capturing portraits and stories of incarcerated people, for which his method had been to take a picture and listen to the person’s story. In a similar fashion, in recent years he has been talking with and photographing people he encountered who were living on the street and in shelters. The resulting book “Division Street,” named after a street in the city where homeless people have often established encampments, will be released this year.

He may have taken all the photos in San Francisco, but Gumpert said the book tells a much broader story.

He said he notices similar attitudes about homelessness expressed around the country.

“We live in a mindset that everybody is responsible for themselves, and nobody else. And that’s why the unhoused are vilified,” Gumpert said. “And it doesn’t matter about whether it’s San Francisco — L.A. isn’t any different, except they have about five or six times as many homeless. New York’s not different. Denver’s not different, you know, Phoenix — that’s the society we live in.”

Gumpert describes the first part of the book as representative of the way most people observe homelessness.

“And the second part is the way that they should see the folks, which is their personal stories,” he said.

Rather than ask strangers for their full life stories, Gumpert decided to ask the people he encountered to describe what the concept of “home” means to them.

Several of Gumpert’s interviewees were parents, struggling to exit homelessness with the help of Compass Family Services. For many parents, the definition of home involved children and family.

“It’s all about the kids, you know?” said Dynasty Toney. “They know that they want friends over and they can’t have it. They know what having their own room is. And maybe they’d like to take a bath, they wanna do bath bombs. And so, when you have kids, it’s hard to just kinda look over, you know, when they deserve it. It’s about having a place for them.”

Toney’s partner J.R. Williams told Gumpert that the problem is not that they’re unemployed. Their work is simply not well paid enough to support the whole family.

“There’s always been one of us has had a job, but it’s just so hard to do it on a single income, which — it shouldn’t be like that,” Williams said. “We have income now, but yet we’re still homeless.”

What struck him most about the families he spoke with, Gumpert said, was how well-behaved the children were under difficult circumstances, and how parents managed to stay together.

“I was amazed, and still am, at how many folks seem to keep the relationship intact,” he said. “It is incredibly difficult to keep a relationship together under those circumstances.”