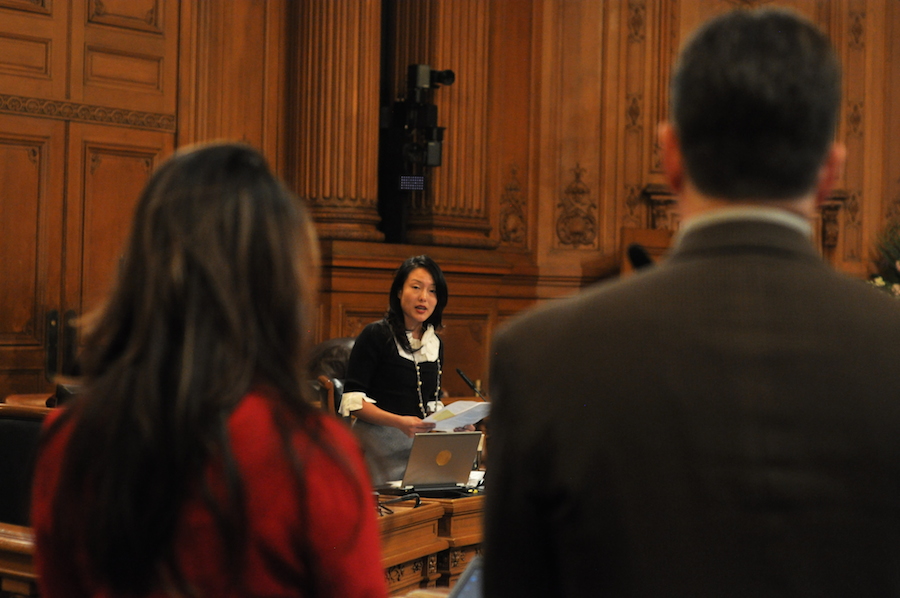 Supervisor Jane Kim recognized community activists who helped her revise, and build support for, the ordinance she wrote to help people with past convictions obtain jobs and housing. Photo by Josh Wolf / San Francisco Public Presss

Dawn Patrick won a housing lottery when she was approved to move into a below-market-rate unit at the luxury apartment complex NEMA near 10th Street and Market. But management refused to let her move in after learning about an old conviction for unpaid child support.

But San Francisco supervisors are planning to help people like Patrick from being denied access to housing, and make it more likely that people with past criminal convictions can find employment in the city. Known as “ban the box,” a newly approved proposal by Supervisor Jane Kim will mean that job applicants no longer have to disclose their criminal history until after they have participated in a live interview. And public and private agencies will be limited in how that information can be used to place people in below-market-rate housing.

“We know that having a stable job and housing are the two most critical factors that reduce recidivism,” Kim said at Tuesday’s Board of Supervisors meeting when the bill received unanimous approval. “This is truly historic civil rights legislation for San Francisco.”

Kim said the ordinance is the first of its kind “that covers affordable housing, below-market-rate units, contractors with the city and private employers with 20 or more employees.” She said her office worked with nonprofit organizations, business leaders and law enforcement to create a proposal with broad support and that it will give people a fair chance that they have previously been denied.

“I believe that it will begin to help eliminate the conscious — and more importantly the unconscious — bias that exists when hiring and housing individuals with a conviction history,” Supervisor Malia Cohen said. “This legislation is not designed to give individuals a preference. Rather it’s to ensure they are judged on their qualifications, not their previous actions.”

One in four adults has an arrest record, and they have few opportunities to find jobs, Kim said. Only one-third of the people participating in a program run by the Public Defender’s Office to rehabilitate ex-offenders have been able to secure employment, and the majority of those are earning less than $3,000 a year, she said.

“How is possible to find opportunity and start a new life if that is the opportunity that you get after spending time in prison?” Kim said.

Supervisor Scott Wiener said the plan will also serve to protect and help members of the community without a criminal history.

“It is in everyone’s interest in this city to make sure that when people come back to society — whether it’s incarceration, or any kind of criminal penalty — that we are absorbing them effectively into society,” Wiener said. “We’re just shooting ourselves in the foot if we have people who come out of the criminal justice system and can’t get a job or can’t get a place to live. It has a cascading negative effect on the community.”