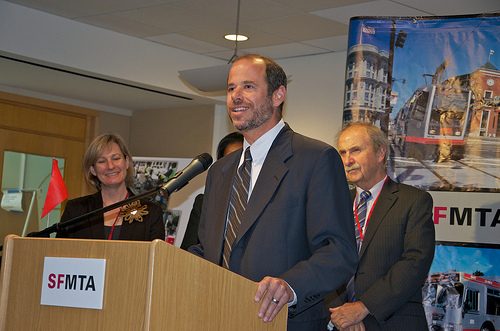 Muni is projecting close to an $80 million budget deficit by 2013-2014. The agency released its preliminary budget report Monday.

Despite the shortfall, Muni wants to change the minds of riders and drivers who are skeptical that the service can be reliable and on time. The San Francisco Municipal Transportation Agency, which oversees Muni, has drafted goals for the next six years that Muni chief Ed Reiskin calls “ambitious.”

The transit agency would create a new key performance indicator to measure the percentage of trips that have less than two minutes of spacing between vehicles, and gaps in service that exceed five minutes.

“The best ways for us to improve reliability is to have the operators we need working, and have the equipment we need functioning,” Reiskin said.

The agency will to receive $20.3 million from the passage of Proposition B in the Nov. 8 election. It willroll out bus signal priority on key routes. Reiskin said this will help with efficiency.

But to improve transit and to avoid service cuts and fare hikes, the agency needs new funding. Some revenue ideas include charging drivers at parking meters on Sunday and charging single-cash-fare riders an extra $.25.

“We can’t go to the same wells over and over again,” said Director Malcolm Heinicke. “We’re not going to solve the deficit with nickel and diming solutions.”

The board made no decisions on what it plans to to close the projected budget deficit.

So what can Muni riders expect in the next few years?

“Improved reliability, better service,” Reiskin said. “I think that’s what I was hired to deliver and if not, then I probably need to look for a new job.”