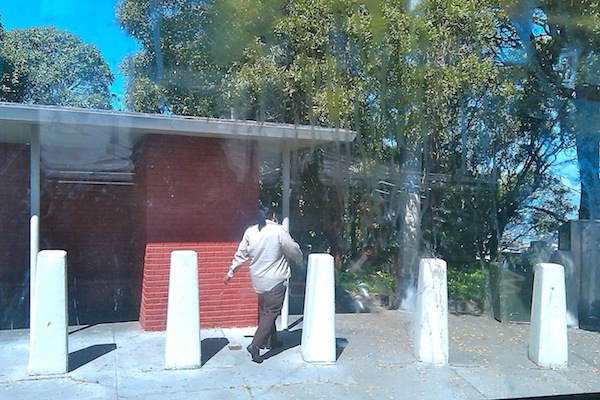 A driver finds relief in a Muni-only bathroom at the end of the 6-Parnassus bus line, at 14th and Quintara. Photo by Jerold Chinn / SF Public Press.

Bus operators looking for a toilet after hours sitting in the driver’s seat will have to hold it just a little longer. That’s because Muni’s plans to build seven new free-standing bathrooms needs to be approved not just by the transit agency, but also Public Works and the Arts Commission. All told, it’s going to take six months.

The scarcity of bathroom facilities has not just made life uncomfortable for workers for years. And it’s slowed down service.

The transit agency is adding seven bathrooms, but operators won’t be able to use them until the end of year. Installation requires approval from the Arts Commission, Department of Public Works and the Board of Supervisors.

The transit agency is also trying to remedy the bathroom shortage by contracting with more businesses near the terminals. Muni is negotiating seven additional contracts with retailers to allow drivers to use bathrooms. Currently the agency has 16 such agreements.

The seven new bathroom kiosks will cost the transit agency $650,000.

Out of more than 140 bus line terminals in the city, 43 have no bathroom facilities and 14 have only temporary portable toilets, the transit agency said in a report released last week. The need for bathrooms was the second most cited reason for service delays in April.

Drivers often search around for a bathroom at the end of the line, or when they pull into a Muni bus yard, knocking the vehicle off schedule, said transit agency spokesman Paul Rose.

Eric Williams, president of Transport Workers Union Local 250-A, said many of his 2,200 members have complained about the shortage for least 10 years.

Last month, Williams told the Municipal Transportation Agency board that seven bus terminals in the southwestern part of the city had no restrooms for operators. He said he tells operators to find a “respectable place to use the restroom.”