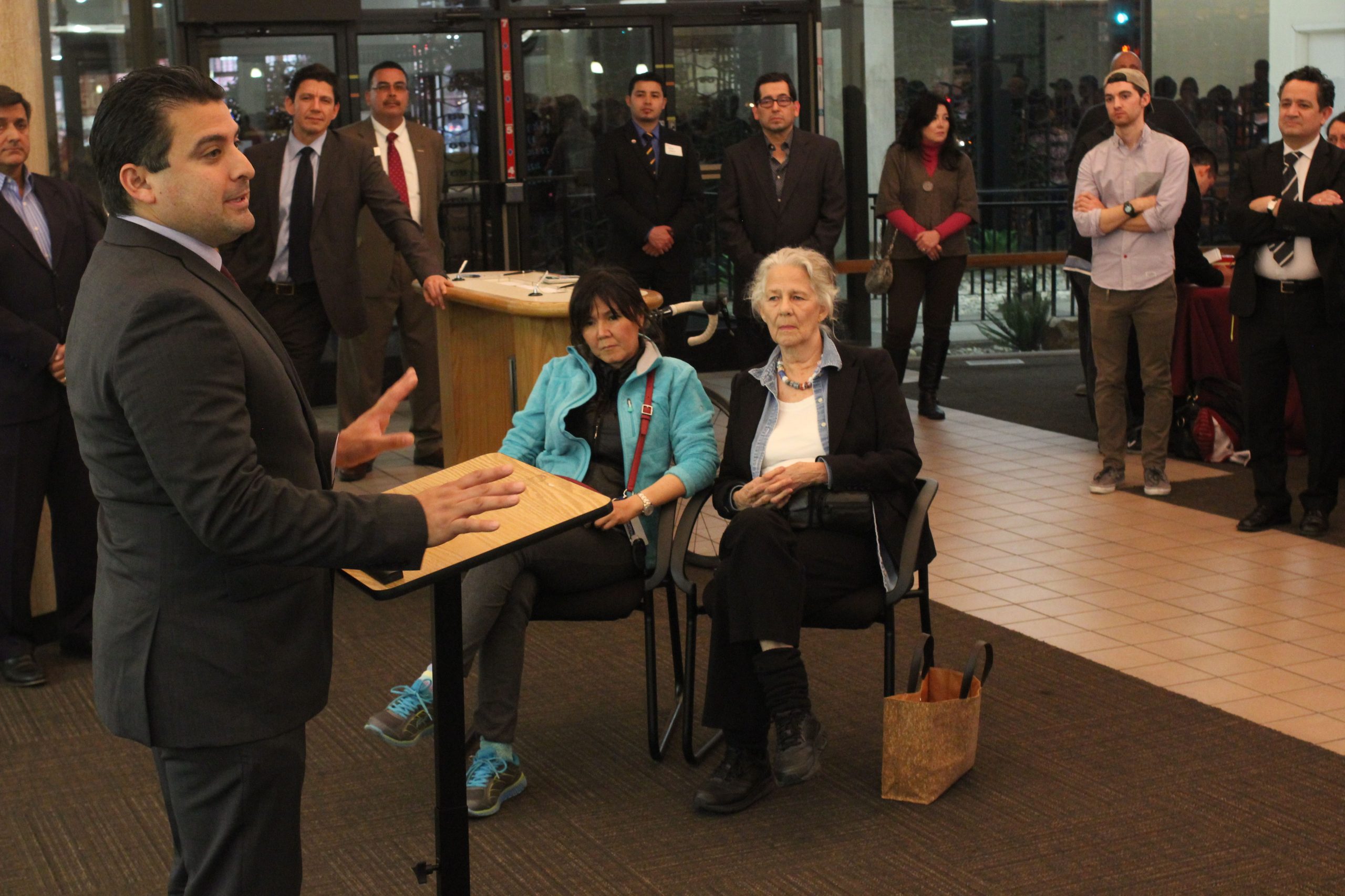 Gabriel Median, policy manager for the Mission Economic Development Agency, addressed a crowd of community members at a meeting last Friday in the city's Mission District. Medina implored attendees to donate to a fund that would assist business owners displaced by a recent fire. Photo by Noah Arroyo / San Francisco Public Press.

The businesses destroyed by a large Mission Street fire in late January could get help from an online fund launched this weekend by the Mission Economic Development Agency.

Gabriel Medina, the organization’s policy manager, spoke alongside City Hall staff to a crowd of about 70 who gathered Friday in the U.S. Bank branch, opposite the scorched shell at 22nd and Mission streets in San Francisco. Before the fire, the building had housed about 65 residents and 36 businesses.

About two-thirds of those businesses had some insurance, and some may qualify for low-interest disaster-relief loans, but many need help sooner than those sources will provide it. The organization will disperse the funds to help the most businesses, Medina said. It aims to raise at least $100,000.

“With that, we can offer just a little bit of cushion,” Medina said. “They’re getting desperate.”

ABC News reported that repairs could take as long as two years.

The fund could help businesses with important expenses that insurance will not meet or fully cover, such as the first payments on a lease for new commercial space. At least one business owner told Mission Local her insurer denied her claim because the fire did not start in her store.

Medina said the fund could be invaluable for businesses that carried no insurance. The organization’s staff will interview each owner to figure out who will benefit most from receiving money from the fund, which is an attempt to duplicate the success of an earlier fundraising campaign. Blogger and area resident Zack Crockett previously raised $180,545 for residents of the building.

Reyna Portillo, who co-owned and worked at Kosa Bella clothing store in the building with her mother, said what they and other displaced business owners need most now are loans with low or no interest. She estimated that a comparable new commercial space would run at least $5,000 a month. “Rents are so high right now.”

At the moment, Portillo is trying to figure out what her insurance will and will not cover, she said.

Maria Garcia, who owned Ria’s Hair Salon, had not bought insurance because she never expected to need it. “I learned,” she said.

So far no tenants, commercial or residential, have been allowed back into the building to see if any of their belongings are salvageable. Karen Van Dine, a multimedia artist who worked and sometimes taught in her apartment there, said she is left “standing in limbo.” All her work and tools and the photographic record of her work may be lost. But she does not know for sure.

“My future ability to work is locked up on the second floor,” VanDine said.

The online fund will accept private donations for three weeks. By this article’s publication on early Wednesday, when the fund had been open for about a week, it had raised about $1,350.