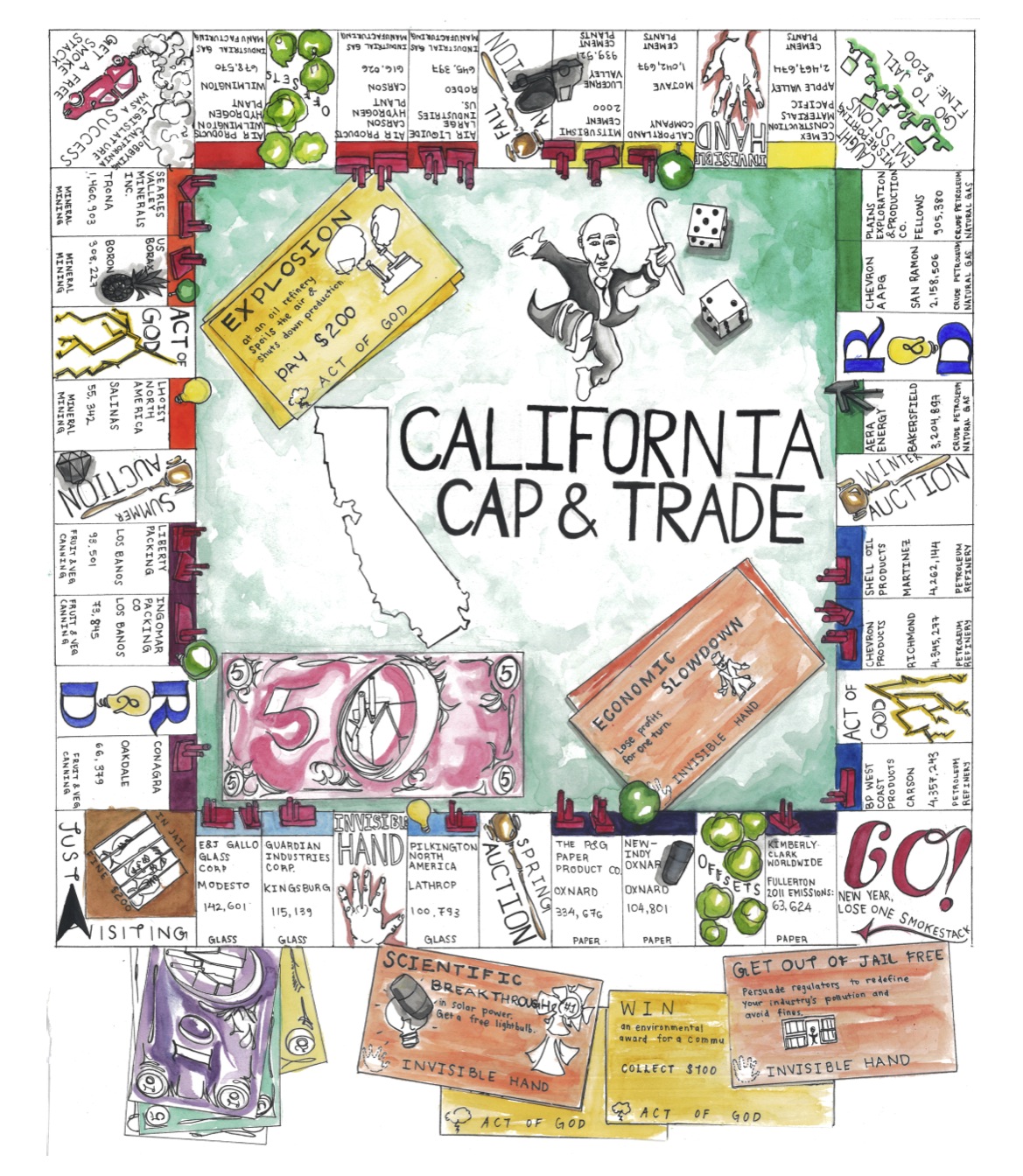 With your die-cast as one of the top eight polluting industries, try to make the most money by the time the statewide carbon cap is reached.

Update 8/2/13: Listen to Public Press editor Michael Stoll and illustrator Anna Vignet interviewed on KALW-FM about how to design a board game to teach people how California’s cap-and-trade program works.

Is it possible to maximize your individual profits while reducing overall pollution? That’s the billion-dollar game California has now started.

The goal for California industries is to work collectively to reduce emissions of carbon dioxide and other greenhouse gases. They do this by trading “allowances” to emit carbon — and hopefully making a profit along the way.

California has decided to cut greenhouse gases back to 1990 levels by 2020. In part, that will be done through market mechanisms. Every year the cap on carbon will go down, so businesses will have to choose whether to pollute less or buy allowances to pollute from another player. Historically, more emissions mean more production and more profit. But now, the state has rewritten the rules …

In this game your die-cast piece will embody one of the top eight polluting industries in California. As you go around the board, you will have to decide whether to buy pollution (smokestacks), innovation (lightbulbs) or carbon “offset” credits (trees) on the market.

Unlike in other board games simulating capitalist accumulation, each player already owns 10 free carbon allowances (smokestacks), but loses one every time he or she passes Go. By the end of five trips around the board, the 80 smokestacks will have been cut in half — not counting trees, which are counted as negative smokestacks. When smokestacks (allowances) minus trees (offsets) equals 40, the pollution target is reached, and the game is over.

You win if you have the most money by the time the statewide carbon cap is reached.

Each player claims an industry and gets 10 free smokestacks that can be distributed on any of the player’s three properties. The spaces on the board are already owned by players and can’t be bought or sold. Each player starts with $1,000. Players roll the dice to move clockwise around the board.

Each player gets 10 free smokestacks (each representing one gagillion tons of carbon dioxide) that can go on any property he or she owns. After passing Go, the player must relinquish a smokestack. At auction (see below) all players can buy more smokestacks.

When another player lands on a property with a smokestack, the visitor (the consumer) pays the producer. Profit is higher if smokestacks are on the property because in some circumstances it does pay to pollute. Profit on properties start at $10 even without smokestacks. For each additional smokestack, give the property owner another $10 in profit.

A player can buy trees only when landing on an “offset” square. (Offsets are certified environmental projects anywhere in the country that can demonstrate absorption of CO2 in forests, reduction of methane release from landfills, etc.) Trees cost the same as smokestacks, but they don’t yield profit. Instead, a tree allows players to keep one smokestack for one turn as they pass Go (when they relinquish the tree).

Trees are purchased for the same price the last smokestack was sold for at the most recent auction. That money goes to the middle of the board, with the funds going to out-of-state environmental projects.

When a player lands on a research & development square, he or she has the opportunity to purchase a lightbulb piece, representing “innovation.” A lightbulb allows a facility owner to make the same profit that a smokestack would bring, but unlike smokestacks it never disappears when players pass Go. Lightbulbs costs $20 apiece and yield a profit of $10 each time another player lands on a space where one is placed.

Four auction squares are spaced evenly around the board to represent the winter, spring, summer and fall sales of carbon allowances. Players can buy and sell smokestacks from one another. Each player declares how many smokestacks he or she wants to buy. Whoever bids highest sets the going price, and everyone must buy or sell the number of smokestacks they offer or request at that price.

Anna Vignet is an illustrator and reporter for the San Francisco Public Press.