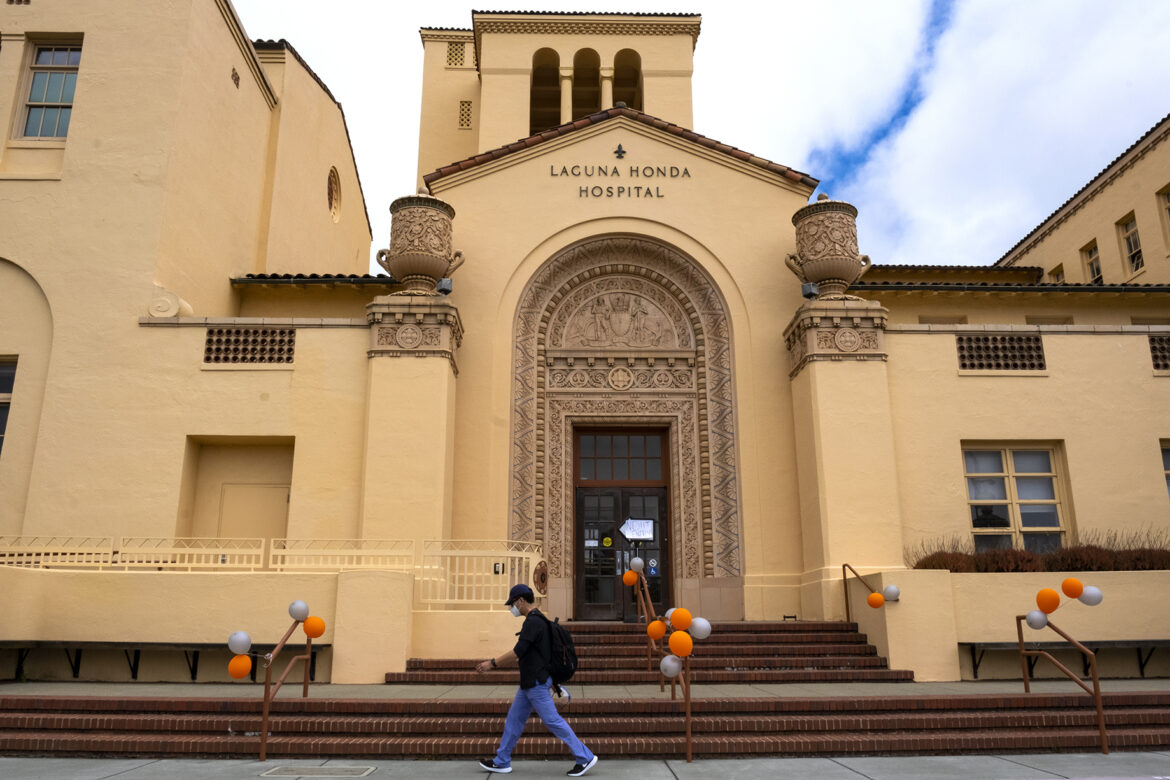 Laguna Honda Hospital — a 780-bed facility on 62 acres in San Francisco’s Twin Peaks neighborhood — is facing challenges in fulfilling a Centers for Medicare and Medicaid Services mandate to move out all patients by Sept. 13, 2022, before it can apply to the centers for recertification.

This article is adapted from an episode of our podcast “Civic.” It is the second in a two-part series about the Centers for Medicare and Medicaid Services’ decision to pull funding for patient care at Laguna Honda Hospital. The first part explores events leading to that decision.

UPDATE 7/29/2022 — The federal government has agreed to allow Laguna Honda Hospital to stop discharging and transferring all patients out of its facility, according to a statement issued by Mayor London Breed on July 28. The announcement came two days after the San Francisco Board of Supervisors unanimously approved a resolution urging the U.S. secretary of Health and Human Services to suspend an order by the Centers for Medicare and Medicaid Services to move all patients out of the hospital. A separate resolution asked Gov. Gavin Newsom and the state health director to stop the transfers. Both resolutions expressed concern that relocating vulnerable patients would cause harm. Federal regulators had previously said they would require Laguna Honda administrators to relocate all patients before they would allow the hospital to apply for recertification needed to receive continued federal funding. Four of the patients recently transferred from Laguna Honda Hospital died soon after being displaced.

Administrators are overhauling policies and procedures to regain federal funding that is set to expire following the issuance of multiple damning inspection reports at Laguna Honda Hospital. They have until Sept. 13 to implement changes, which include a requirement to transfer or discharge all patients, before they can apply for recertification from the Centers for Medicare and Medicaid Services — which has the authority to restore funding for patient services. But administrators say they’re struggling to fulfill the centers’ mandate to move out all patients by the looming deadline.

Laguna Honda has room to house more than 700 patients (although as of July 18, occupancy is at 613) and accounts for 34% of all skilled nursing facility beds available in San Francisco. And the hospital’s interim CEO, Roland Pickens, said finding other suitable beds, ones that come with the same level of medical care, has proven to be a near-impossible task. Part of the challenge is finding beds for two distinct populations: those who are typically older and need high-level nursing home care, and those who are not usually elderly but require long-term treatment for psychiatric needs, behavioral disorders and substance abuse problems.

San Francisco’s health department created an online dashboard to show the progress of patient transfers. It shows that Laguna Honda staff are making about 1,500 calls a week searching for open beds. According to the dashboard, as of July 18, 40 patients have been transferred to skilled nursing facilities, and 16 were discharged, three of them to homeless shelters.

The requirement that Laguna Honda move out all patients before seeking recertification is leading some to foresee disaster for patients, their families and for a city already beset by homelessness.

“There’s no way — it’s unthinkable to try to relocate over 700 residents,” said Valoria Russell-Benson, who has worked as a nurse at Laguna Honda for 27 years. “A relocation or to close down Laguna Honda would end up in homelessness for a lot of our residents.”

The Centers for Medicare and Medicaid Services declined an interview request, but in an unsigned statement, wrote that ending a Medicare and Medicaid provider agreement was a last resort. The agency has agreed to continue funding patient care until Sept. 13 as the hospital works toward recertification.

Two consulting firms — Health Management Associates and the Health Services Advisory Group — are helping by conducting mock inspections, according to Dr. Derek Kerr, who worked at the hospital for 10 years. Following his involvement in a successful whistleblower case against the hospital, he became an investigative reporter for the Westside Observer — an online news publication covering San Francisco’s western neighborhoods — and has inside knowledge on activities at Laguna Honda. And full disclosure, he has also donated to the Public Press.

Kerr said the first mock inspection happened in June, and Laguna Honda is correcting deficiencies identified then. San Francisco General Hospital Quality Management staffers have been brought in as well, along with more nurses and more sheriff’s patrols, safety searches and visitor screenings. And narcotic analyzers will check patients when they return to the hospital after brief, permitted excursions.

These measures are meant to address the problem of illicit drug use in the hospital and the presence of contraband among patients. Kerr contends that these problems arose when the Department of Public Health made admissions policy changes in 2004 and introduced a younger population of men — some of them with substance abuse issues.

He said the elderly patients who formerly made up most of the hospital’s population cannot thrive in a “fortified institution” with drug scans, increased police presence and nurses searching patients for contraband.

“Those kinds of constraints are diametrically opposed to what nursing home care should be for elderly patients. They need a completely different model,” he said. “The risk is that you transform the hospital into a carceral complex in order to manage an antisocial subset. So that’s the problem. It might deform the hospital.”

According to a report presented by Pickens, Laguna Honda’s interim CEO, at a San Francisco Health Commission meeting July 19, a second mock survey will occur in August, and in September, the hospital will apply for recertification. If Laguna Honda passes an initial inspection, the Centers for Medicare and Medicaid Services will return 90 to 120 days later for a final review. If it passes that test, Laguna Honda could be in the clear by January 2023.