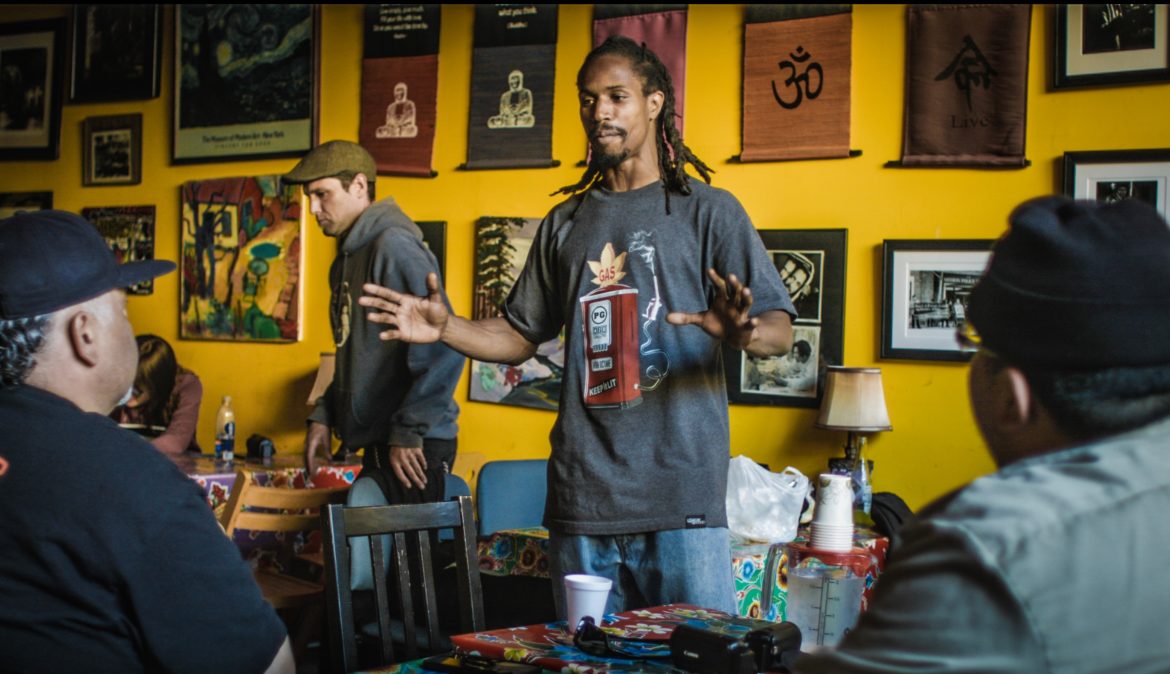 WeCopwatch trainer David Whitt teaching a copwatch college session in San Francisco in 2018. Now, due to social distancing guidelines, the curriculum that is normally taught in person during copwatch college has been made available online.

Interest in monitoring and cataloging police conduct has skyrocketed following the Black Lives Matter protests and the onslaught of videos of police violence, according to an organization that specializes in this work.

Berkeley Copwatch, a group that has been filming and tracking local police misconduct for 30 years, reports that attendance at its training seminars has surged 20-fold in the last few months. Prior to COVID-19 lockdowns, the organization would routinely host small, intimate know-your-rights training classes for community members in the Bay Area who wanted to learn how to document police actions.

The group’s first online session post-lockdown drew more than 300 attendees from Modesto to the Philippines — a big shift from the in-person classes which normally held 15 to 30 students. As more faces began to appear on the screen, introductions became necessary and distinctions between city laws were needed. In New Orleans, officers don’t have to display badge numbers, a trainer explained to attendees, but in California they do.

“There’s something fundamentally shifting about our project of cop watching,” said Berkeley Copwatch co-founder Andrea Prichett, who noted that the organization recently made its database of police videos available to the public and launched a version that can be used by anyone who wants to start a Copwatch organization in their community. “It doesn’t have to just be about watching. Now it’s about organizing and what we do with the information.”

The group is one of several Bay Area organizations that instruct observers in how to record interactions between the public and law enforcement officials that are seeing a surge in demand for their services. The groups have shifted their tactics and focused more resources on online course delivery in response to the coronavirus pandemic and the surge in protests. They’re also ramping up misconduct tracking efforts and social media campaigns as the public focus on police brutality heightens.

The San Francisco National Lawyers Guild, the Bay Area chapter of the National Lawyers Guild, has trained more than 1,000 legal observers since the protests demanding justice for the May 25 death of George Floyd began. While legal-observer training is a regular part of their curriculum, the classes have been happening more frequently due to increased interest and need. Since the group took its training online in response to the pandemic, the guild regularly sees upwards of 300 attendees log into its Zoom seminars to learn how to document police conduct at protests and other events, and to provide information and resources to protesters on the ground.

Along with training Bay Area volunteers, the San Francisco National Lawyers Guild also works to get other chapters caught up on training. “A lot of places that don’t have the rich history of protest that Oakland does and therefore don’t require legal observers to the extent that Oakland does,” said James Burch, president of the San Francisco guild and policy coordinator for the Anti Police-Terror Project, an Oakland nonprofit that works to help advocate for community members against police violence. “They are in a moment right now where they’re overwhelmed. If we’re overwhelmed, I can’t imagine how smaller cities with a less formal relationship between protesters and folks doing legal observing are doing right now. This is an effort that’s being worked on nationally.”

“There are amazing folks who do this work for the NLG across the country,” said Burch. “Everyone with skills is trying to share them right now to make sure we can get as many people trained as possible to support the movement for Black lives.”

WeCopwatch, a community collective founded in Oakland in 2013, has worked to help at-risk communities form new cop watch groups from Ferguson, Mo., where massive protests erupted after a young Black man was killed by police in 2014, to Standing Rock Reservation in North Dakota, where a Native American-led branch was formed following clashes between police and activists protecting the Missouri River. It has mostly focused on providing on-the-ground, in-person training over a series of days, though sometimes the sessions can last for months. Once co-founder Jacob Crawford and his colleagues lived on a Native American reservation for two years to train the community and support its newly formed group.

Now the organization is planning on launching an online Copwatch College, modeled on its in-person trainings. Communities interested in forming their own groups will be able to download a workbook and take part in a three- to four-day online course. The team began working on the course after an onslaught of daily requests for support and training amid the elevated tension between communities and police following the onset of Black Lives Matter protests.

The curriculum was inspired by a course that Berkeley Copwatch has taught at the University of California, Berkeley, as well as what Prichett taught him, said Crawford, who became active in the movement by working shifts for Berkeley Copwatch starting in 2000. In 2004, Crawford created “These Streets Are Watching,” a documentary-style know-your-rights training video.

“While we understand cop watchers today as being great observers with video cameras, these ideas have a very long legacy in community defense projects,” said Crawford. “The concepts are very deeply rooted in the Black power and Native American power struggles of the ’60s. When the Black Panthers were founded, one of the first things that they did was watch the police in Oakland.”

Formed in 1990, Berkeley Copwatch became the first group focused on filming on-duty officers with video cameras. In the ’90s, the group’s main goal was to expose white residents to the injustice that people of color experience at the hands of police in Berkeley. However, the war on drugs rhetoric around militarizing the police coupled with limitations in technology made it difficult to bring their findings to the masses.

Now, Prichett says that these conversations are flowing much more naturally thanks to technology making it easy to share videos of police misconduct with a larger audience. Additionally, the transition to online seminars has made their education more accessible to the public.

“I want to weaponize the information and I want to have it be credible and useful and illustrative of not only how individual police are conducting themselves, but how police practices and city policies and laws are impacting communities,” she added.

Two years ago, Copwatch began partnering with Witness, a New York City-based nonprofit that works with other organizations to build on their digital and video presence. They created a database and began bringing their program online.

The new database allows users to upload videos and record them under different searchable markers such as officer name, badge number and type of violation. It also asks the uploader to input classified information about the civilian involved in the altercation so that volunteers can follow up with them and make sure they are OK.

“What’s really exciting about our collaboration with Witness is on one hand, locally, we’ve already seen ways that we can utilize the database to more effectively build campaigns that support our communities against injustices and violence that is perpetrated by the police,” said Berkeley Copwatch volunteer  Maria Yates. Yates was an activity director at a senior community until she left her job to focus on Copwatch full-time early this year. She is one of the key players working on the database and has also been working on updating the training sessions. “We are in a place now where we can help other organizations to similarly build up a database that benefits their local community,” she said.

In 2018, Berkeley Copwatch used the videos in its database to launch a campaign to get rid of UC Berkeley Police Officer Sean Aranas, who had been the subject of years of accusations of abuse against the homeless community. Dozens of videos provided by community members and recorded by cop watchers showed Aranas harassing homeless people, confiscating their belongings and violently arresting them, often without charges.

In multiple videos, he can be seen acting violently, grabbing people by the neck and slamming them to the ground. The group uploaded the videos to its YouTube channel and circulated the footage via fliers and social media. Aranas retired less than two months after the videos were released.

The lawyers’ guild has also directly confronted the Oakland police over actions of misconduct, specifically related to the treatment of protesters.

“Our lawyers have forced police to sign agreements about protocol and practice,” said Sara Kershnar, interim Executive Director of the organization’s San Francisco chapter. The group’s lawyers follow up with letters to the department and refer to these agreements when they have been breached.

The legal observers serve a dual purpose of holding the police accountable and letting the people protesting know that they are safe, said Burch.

“When the state uses the criminal justice system as a tool of repression, we need to develop systems that can make those processes as transparent as possible and fight back against that,” said Burch. “The hotlines and the legal observers are supporting the movement for Black lives right now and trying to show solidarity and follow Black leadership.”

Prichett views Copwatch as a critical tool for transparency and hopes its newly updated database will aid its momentum.

The group plans to continue its online sessions while expanding its reach to create specific sessions that cater to different needs. Instead of a single format, there is now a know-your-rights training geared to the general public, seminars catered to individual cop-watching groups that need mentorship and classes specific to Berkeley cop watching.

“We’re seeing a tremendous display of people power right now,” said Burch. “I’m so pleased to work alongside the countless folks, not only locally, but across the country that are working to ensure that the state cannot interfere with this tremendous demonstration of people power.”