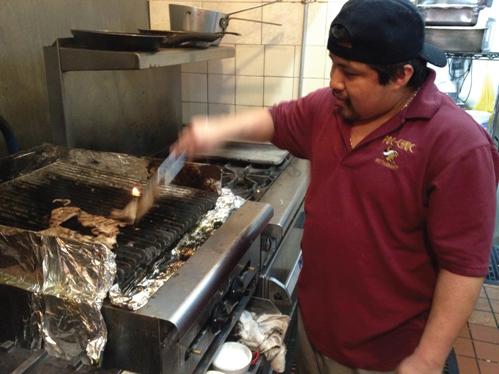 Indigenous people from Mexico and Central America, who make up as much as 30 percent of the population of immigrants from there, are less likely to be literate, to speak either Spanish or English proficiently or to have legal documentation, said Alberto Perez, the director of programs for Asociación Mayab. The San Francisco-based nonprofit group primarily serves the Bay Area’s estimated 40,000 Yucatec Mayas.

“Do you think your sushi is being cooked by a Japanese chef, or your pasta by an Italian? No, it’s a Yucateco,” Perez proclaimed.

Perez estimated that 90 percent of Bay Area indigenous immigrants from Yucatán, in Southern Mexico, work in kitchens, from taco trucks and holes-in-the-wall to San Francisco’s premier restaurants. Restaurant owners, he said, often seek out Mayan workers because they work hard and do not complain. And restaurant workers in general have it bad — they are nearly five times as likely as the average worker to be a victim of illegal wages, according to federal Department of Labor estimates.

The Yucatec community is an industrious one, despite the challenges of starting out near the bottom of the labor market. Entrepreneurship is widespread; remittances to families in rural areas back home have generated much of the region’s economic development. So, all the more reason for indigenous culinary workers to be paid the legal minimum wage, which is now $10.55 an hour in San Francisco.

(There is no exception to the minimum wage in the city. In most states and localities with their own minimum wage laws, employers can pay a lower minimum wage for employees who get tips.)

Workers say restaurants here can get away with paying such low salaries because immigrants are desperate for jobs.

“We do not have any other options,” said Omaru, a 28-year-old dishwasher, who did not give his last name for fear of immigration enforcement. He immigrated a year and a half ago. “It is not easy. You need to send money to Yucatán.”

The other option for Maya migrants to California, seasonal farm work, is less appealing. In his restaurant job, Omaru reasons, “even if it is raining, there is work.”

Paying below the minimum wage is a nationwide problem. In 2012, the Department of Labor found more than $35 million worth of minimum wage violations and ordered back pay for more than 107,000 workers. Trying to combat this problem is like playing a game of Whac-A-Mole. The government can investigate and prosecute one employer while thousands more continue violating the law unabated. At the very least, some of the damage has been undone for a lucky subset of workers.

Violations of local labor law are widespread in San Francisco too, despite the best efforts of the local Office of Labor Standards Enforcement. Perhaps paradoxically, city officials say, often the violators are businesses owned by immigrants as well.

Though indigenous workers who get paid properly say they are grateful for the local law, the cost of living reduces take-home pay.

Eliazer came to San Francisco from Yucatán in 2004 and now makes the minimum wage as a cook in a large kitchen. He speaks both Spanish and Yucatec Maya at home. Eliazer, who did not want to give his last name because he does not have legal residence in the United States, laments that even working hard all day preparing food, it is difficult to make ends meet. Minimum wage or below just won’t cut it when you are renting an apartment downtown.

“If you work for eight hours,” he said, “you need a second job just to pay your bills.”