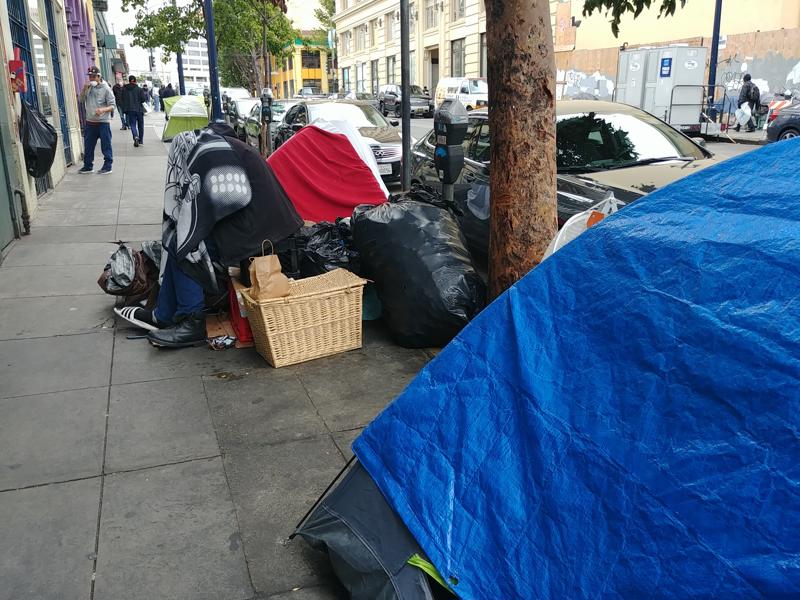 A homeless person sits under a blanket next to a cluster of tents in the Tenderloin May 13. Noah Arroyo / San Francisco Public Press

Since coronavirus cases were first recorded in San Francisco, the city has had to grapple with the question of how to minimize potential outbreaks of the disease among unhoused people. Two reporters who have been covering the city’s response to homelessness during the pandemic for the San Francisco Public Press, Brian Howey and Nuala Bishari, reflect with “Civic” on a year of stories about seizing belongings, COVID-19 testing, hotel policy and supportive housing.

Instructions to “shelter in place” were more difficult for people without shelter to follow than for people with an apartment or house. The same held true for directions regarding handwashing.

“San Francisco has long been known as a place that doesn’t provide very many public restrooms throughout the city. And so a lot of people in the unhoused community relied on restaurants and libraries and other spaces that normally left their bathrooms open to the public,” Howey said. When places like these closed, “unhoused people didn’t have access to bathrooms. And bathrooms provide for them, you know, not just a toilet but a place where they can access drinking water and wash their hands and stay clean.”

Howey’s reporting showed that many of the hygiene stations the city had provided were missing key components or absent entirely. A year after that report, accessing hygiene remains difficult. Bishari, on a recent reporting trip in the Bayview, spoke with a man living in his vehicle who once used a hygiene station set up half a block from where his RV is parked until it was removed two months into the pandemic.

“We asked him, ‘out of all the things that we were talking about, you know — the stress over policing, access to food — what would be the thing that would help you the most in this moment?’ And he said, ‘I want that bathroom back,’” Bishari said.

Nevertheless, the various city departments’ responses to homelessness during the pandemic have resulted in experimentation.

“I think that the pandemic has afforded us a lot of flexibility to try new things,” Bishari said. “A good example of that is shelter-in-place hotels, testing out different hygiene stations — there’s been a lot of innovation, but whether or not that lasts in the long term is yet to be determined.”

Long-term planning has become a key part of the debate about how to use hotel rooms. City officials have expressed concern about offering people only short-term stays in these hotels and then turning them back out onto the street. Bishari’s reporting has also revealed that nearly one in 10 permanent supportive housing units are vacant. That discourse contrasts with the frenetic search for solutions early on, Howey said.

“There was definitely a scramble on the city’s part and a sense of scrambling in the way that they were addressing a lot of these issues,” Howey said. “And nowadays, what you’re seeing is more of thinking in the long term. How are these new initiatives going to play out in the long run?”