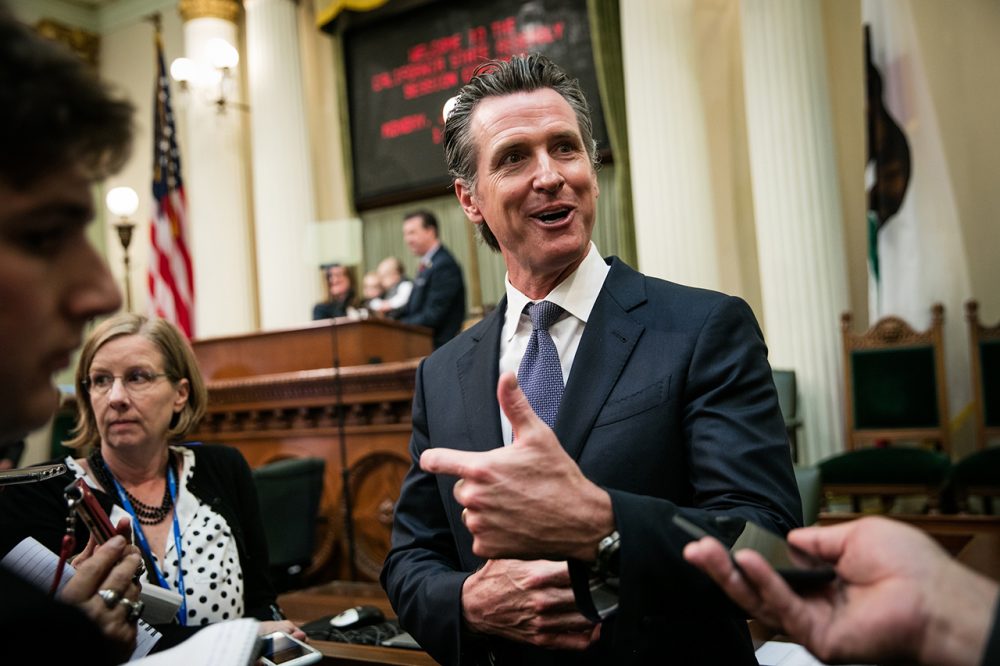 Both the California builders’ lobby and the state’s largest trade union for construction workers backed Gavin Newsom’s campaign for governor. When the Democrat won in a predictable landslide in November, they proceeded with a common purpose: to knock down barriers to fast housing construction — among them the state’s primary environmental law.

Participants in the negotiations said that in addition to working with Newsom, then lieutenant governor, they also consulted with some community groups. But they did not engage with some of the most prominent environmental organizations, at least until February 2019 — just before Newsom announced support for broad changes aimed at speeding projects that might add affordable housing to the state.

“We’ve been supportive of all the major environmental policies and advances that the state of California has passed,” said Cesar Diaz, the legislative and political director of the State Building & Construction Trades Council of California. “But we’re dealing with a housing crisis.”

Diaz said the Legislature “hit the ground running” on various proposals, some of which would streamline the local environmental review process. “We have now opened up conversations with the enviro groups and will continue to meet with the majority of them to have these discussions. Whether they can agree or come to support, I’m not sure.”

But several environmental leaders said they were locked out of these talks that involved what could amount to a frontal attack on their most valuable legal tool, the California Environmental Quality Act (CEQA), which for nearly 50 years has required developers to file extensive reports and empowered neighbors to appeal local building project plans.

“I continue to know nothing about this whole process,” said David Pettit, a senior attorney at the Natural Resources Defense Council. “The issue that concerns me a lot right now is how we can build more affordable housing in a way that respects California’s fight against climate change. We need more urban densification. We need more transit-oriented development — as opposed to, you know, big single-family developments out in the foothills somewhere.”

A coalition of local and statewide environmental activist groups said they were not involved in the conversations and had serious concerns about deregulation proposals that could roll out in coming months. They will press their policy agenda this legislative session despite their exclusion.

Dan C. Dunmoyer, president and CEO of the California Building Industry Association, the state’s largest developer trade group, declined to elaborate on the negotiations or the involvement of Newsom and his staff, saying “sensitivity” of the issues at stake demanded discretion.

But in late January, Dunmoyer told the Los Angeles Times that developers and labor were edging closer to consensus: “Instead of us being at odds like we were and going to our respective corners, now we’re on a path to not only make it easier to build but also to grow labor.”

On Feb. 12 in his State of the State address, Newsom blamed strict state environmental rules as one reason for the shortfall in affordable housing construction, which he said has reached crisis proportions. “I want to applaud the efforts by homebuilders and labor leaders, who together are working to forge a compromise to accelerate production,” Newsom said.

The framework Newsom endorsed contained a mix of labor and environmental reforms:

The compromise plan has not been detailed in any bills, and other ideas could come into the discussions. In his address, Newsom tossed out the idea of waiving environmental rules for the construction of emergency homeless shelters.

“If you could create CEQA waivers to expedite stadium projects — and we do all the time — we sure as hell should be able to do that for 130,000 souls that are out in the damn streets and sidewalks in this state,” Newsom said. “I’m happy to have that debate. And forgive me, I know it leaves people uncomfortable, but so be it. Literally people’s lives are at stake.”

Ashley Werner, a Fresno senior attorney for Leadership Counsel for Justice and Accountability, a public-interest law firm, said environmentalists and community activists worry that developers are exploiting the housing crisis to achieve their long-term goal of weakening environmental rules in pursuit of higher and more reliable profit margins.

“CEQA is one of the most important tools that we have in California to ensure that disadvantaged communities have a voice in decision-making processes and land-use processes,” she said. “If it weren’t for CEQA, at the local level, there is often no public process for significant projects of all types that impact communities. CEQA functions like civil rights legislation.”

Environmentalists have expressed growing concern that a deal between industry and construction unions could lead to more suburban sprawl, which is out of step with the state’s goal of reducing carbon emissions from passenger cars.

In recent years, builders have cast CEQA as the biggest barrier to affordable housing, arguing that community review opens the process to abuse, empowering anyone to block a project for trivial reasons, such as changes in wind patterns, shadows on parks and auto exhaust from idling cars.

Newsom echoed industry talking points in a recent interview with Politico: “We are past the point of absurdity with some of the abuses we are seeing.”

Others in the capital question the premise that CEQA is a major impediment to solving the affordable housing crisis, or to future economic growth.

CEQA, enacted in 1970, regulates pollution, carbon emissions, traffic congestion, flood control and other issues. It requires local agencies across California to study and identify how a development could affect the environment and detail how it could mitigate any problems. CEQA also requires a public process of hearings and appeals.

In 2017, the state Senate’s Environmental Quality Committee surveyed an array of agencies about the effect of CEQA on government-led development projects they supervise. It concluded that the law had little negative economic effect. Of 15,783 development projects between mid-2011 and mid-2016 in the study, only 201 required full environmental impact reports because of their size, scope and nature.

In an older study, the attorney general’s office focused on San Francisco environmental lawsuits. It found that less than 1 percent of developments involved any CEQA litigation over an 18-month period ending in 2011.

Public-interest lawyers often challenge developers’ environmental reports on behalf of community groups, questioning inconsistencies in data about pollution, energy efficiency and other concerns, and suggest ways for developers to reduce those effects.

When environmentalist do challenge projects, they do it to ensure the protection of communities, said Howard Penn, executive director of the Planning and Conservation League, a Sacramento advocacy organization: “We focus on getting the applicant in the lead agency to deal with mitigation efforts in the environmental impact reports, and we make sure that they’re done correctly.”

Wiener said Newsom and the Legislature should favor affordable housing whenever it considers loosening environmental laws: “CEQA should not be making it harder and more expensive to do environmentally sustainable things like infill housing near transit and jobs.”

He pointed to recent lawsuits around a plan to refashion a portion of San Francisco’s South of Market neighborhood, the largest such project there in decades. The city’s Board of Supervisors considered several community appeals to the plan, which calls for more than 8,000 new apartments. Some neighbors appealed because of concerns about shadows and views. Others complained about gentrification and the lack of child care. One group said the plan did not include enough tall buildings to increase residential density.

In her first State of the City address, in January, San Francisco Mayor London Breed announced a charter amendment proposal to designate affordable housing “as-of-right,” meaning it would not be subject to discretionary review. It would eliminate the possibility of appeals for projects setting aside 100 percent of apartments for low- and moderate-income residents.

“If an affordable housing or teacher housing project is proposed within zoning, then build it, and build it now,” she said. “No more bureaucracy. No more costly appeals. No more ‘not in my neighborhood.’”

But critics say politicians are wrong to equate environmental review with NIMBYism. One study commissioned by the Oakland-based Rose Foundation for Communities and the Environment, a nonprofit advocacy group, examined five case studies representing a variety of building plans. The report, by BAE Urban Economics, an economic advisory firm, found that environmental review never exceeded 6 percent of development costs. In one project, a city transit-oriented development proposal surrounding the Millbrae rail station, estimated to cost $1.2 billion, required environmental reviews costing $300,000, or just 0.025 percent of the total.

Backers of CEQA describe it as a tool to drive civil rights policy. In January, environmental and social justice advocates sent a joint letter to the Legislature asking leaders to protect the law.

“Gutting CEQA will not impact the housing crisis,” said the statement from the Center on Race, Poverty & the Environment; Leadership Counsel for Justice and Accountability; Communities for a Better Environment; Center for Community Action and Environmental Justice; and the Western Center on Law and Poverty, among others. They said stronger renter protection, rather than regulatory exemptions for developers, was the best way to preserve and expand affordable housing stock.

“When I hear the term ‘streamlining CEQA’ for affordable housing it sends up a lot of red flags,” said Allen Hernandez, an attorney in Riverside who coauthored the letter. “When it comes to affordable housing, I don’t think the root of the problem lies with environmental regulations. If we’re really talking about housing, I think we need to be talking about housing restrictions and legal barriers that benefit landlords and hurt people in communities.”

In the Bay Area, community groups have used state environmental rules to pressure developers to offer protection from rising seas.

As the Public Press has reported in ongoing investigations since 2015, Bay Area cities are slowly awakening to the growing scientific consensus that sea levels could rise by as much as 10 feet by the end of the century. For community groups concerned about regional flooding and disruption that could cost hundreds of billions of dollars that future generations will have to fix, environmental impact reports under CEQA provide leverage to cities and neighbors questioning the wisdom of waterfront construction.

“In San Francisco, you may be able to build a sea wall, but you do need to do an environmental impact report to figure out what are the impacts of the seawall,” said Caroline Farrell, executive director of the Center on Race, Poverty & the Environment. “Where does that water go? Does it impact another community downstream? What are other impacts, and how do you mitigate them? It allows for a conversation.”

In Riverside County and in Central Valley cities such as Fresno, environmental attorneys are questioning the growth of warehouses used as distribution points for e-commerce and big-box store companies, including Amazon, Home Depot and Target. Forty percent of U.S. consumer goods pass through these centers before shipping.

Residents, largely low-income people of color, say the punishing smog produced by the trucks is getting worse. The Inland Empire has some of the worst air in the country, according to the American Lung Association. It is so bad that the South Coast Air Quality Management District last year began to study ways to regulate emissions from the ground shipping industry.

“We’re dealing with immense air pollution from the thousands and thousands of diesel trucks that come into our region,” Hernandez said. “I say CEQA actually needs to be strengthened.”