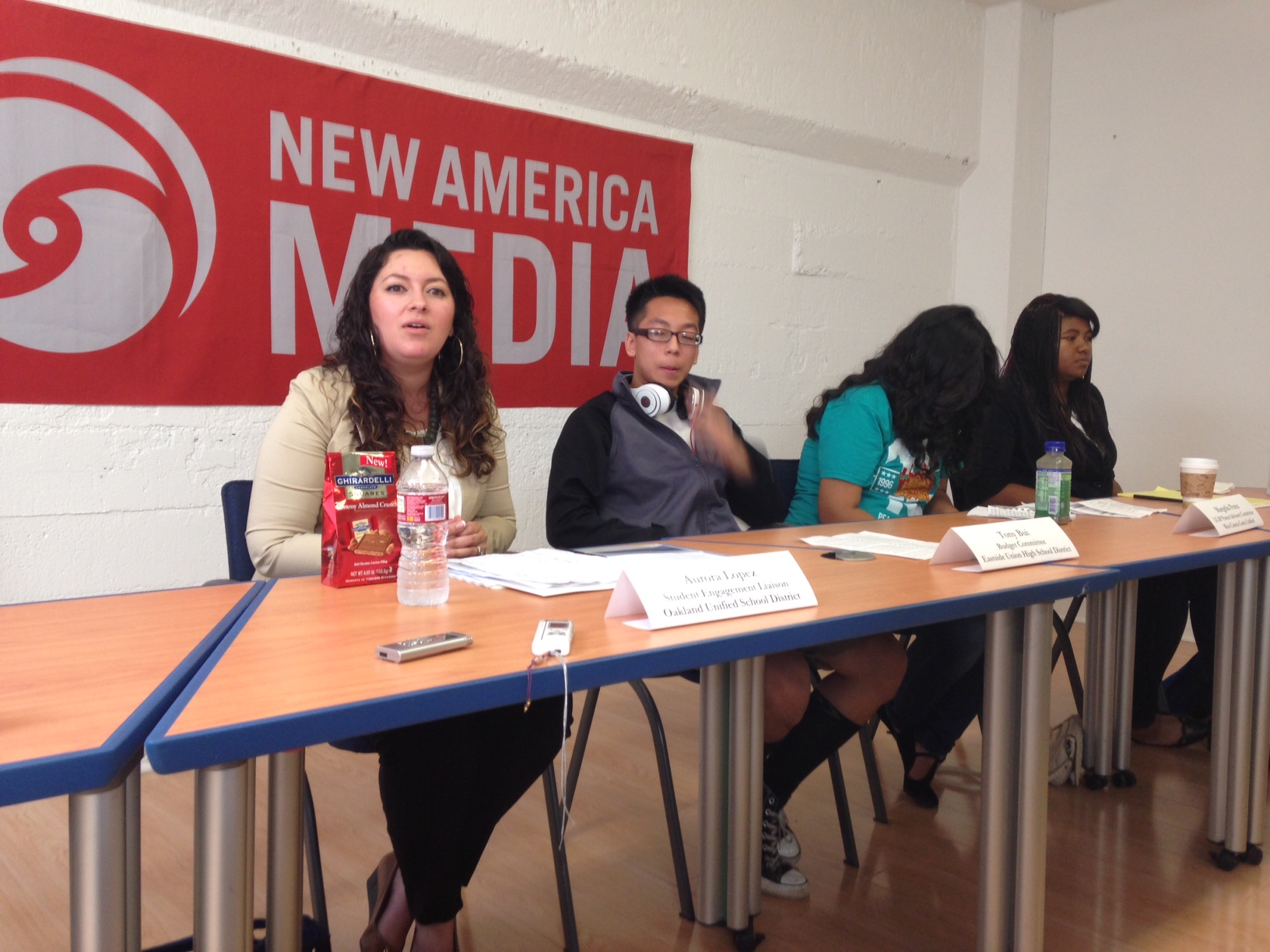 Who decides how public schools spend their resources to combat inequality?

That’s the question facing the San Francisco Unified School District and educators across the state, who this month are telling California how they will spend extra dollars aimed at leveling the playing field for disadvantaged students.

Of the many “stakeholders” in divvying up the new funds, it is perhaps students themselves who have been consulted least.

San Francisco officials say that spreading the money out over a large number of existing priorities is the best way to ensure equity. But some advocates for children disagree, saying the city has the chance to focus on schools whose students face the highest barriers to academic success.

With California public schools set to receive hundreds of millions of dollars in additional funding in the coming school year, several education reform groups say Bay Area schools have not done enough to bring students — not just parents and other district residents — into the decision-making process.

Across the state this spring, public school officials consulted with teachers, parents, local nonprofit leaders and others about how to spend the new funds, which will become available starting this fall.

In June, the San Francisco Board of Education approved an “accountability plan” explaining how $63.7 million more from the state will benefit disadvantaged students. The plan prioritizes funding for social workers, advisers, security aides, multilingual programs and schools in high poverty neighborhoods.

In March, district leaders said the funds, then estimated at $39 million, would most likely be used to fill existing budget deficits, pay for existing programs and raise teacher pay. The increase of about $25 million since then  was based on updated projections of low-income students, foster youth and English learners in the district.

But some critics still question whether the funds will truly target disadvantaged students.

At the June 24 Board of Education meeting, some city residents said the district could have improved its outreach by releasing drafts earlier. Some criticized the accountability plan for being ambiguous about where exactly the money would go.

“The extent to which community input was incorporated is not clear,” said Chelsea Boilard, director of programs at Coleman Advocates for Children and Youth, a San Francisco-base group that campaigns on behalf of low-income families. “There is a lack of transparency about how dollars are spent.”

In fact, few students participated in the community consultations. The San Francisco school district reported that  only 6 percent of residents who offered ideas were high school students. Parents and guardians accounted for 70 percent of participants.

Administrators in San Francisco held public forums, small focus groups and meetings with immigrant and low-income families requiring translation into Spanish or Cantonese. They also distributed an online survey, but it drew only 24 responses.

All that new money is coming from the Local Control Funding Formula, a state initiative intended to level the playing field by giving extra resources to districts with more low-income and otherwise disadvantaged students.

While districts with high numbers of disadvantaged students received a small amount of additional funding last fall,, the payments will increase significantly over the next eight years. The accountability plans, due to the state early this month, will dictate spending over three years.

State guidelines require local control money to be used for increasing and improving educational outcomes for students with the greatest obstacles to learning, such as those from low-income and immigrant families and the foster-care system.

But state education officials have gone back and forth for months about how stringent those rules should be, and what kinds of programs effectively alleviate inequities.

Gov. Jerry Brown and allies in the Legislature two years ago created the fund to bolster language education, guidance counseling and tutoring programs, as well as by increasing teachers’ salaries and hiring classroom aides.

The Bayview and Mission neighborhoods will receive about $1.2 million in additional support. However, as indicated by school officials in March, a significant portion of the new money will go to training and hiring teachers.

Equity is still a problem in part because despite policies that encourage integration and increased funding based on the number of disadvantaged students, some schools harbor wealthier families than others. That means private money in San Francisco sometimes gives hidden advantages to children who need the least help.

District data from 2011 showed that parent fundraising at 10 elementary schools raised $2.77 million — an eightfold increase from a decade earlier. That softened the effects of the budget cuts at schools with wealthier families, but students at the remaining 61 elementary schools continued to face dwindling resources, reduced staff, run-down libraries and outdated technology.

The problem of inequities caused by parents fundraising was the focus of the winter 2014 cover story of the San Francisco Public Press, “Public Schools, Private Money.”

Students from districts across the Bay Area emphasized the need for additional funding for textbooks, guidance counselors and teachers, as well as improving infrastructure. Some said that district officials tended to overlook these areas or minimize their importance.

Tony Bui, a sophomore at James Lick High School, said many students in the Eastside Union High School District in Santa Clara wanted additional guidance and support from social workers and counselors. He said this would be more beneficial than the new technology the schools invested in.

The district “has allocated a lot of money into James Lick’s new technology, including computers, Macs, iPads and more technology,” Bui said. “I don’t think that would benefit the students as much as social workers, counselors and better textbooks, because that’s what the students need more.”

Students at Richmond High School in the West Contra Costa Unified School District said their school had similar needs. Margelia Perez, a junior at Richmond High, said there was a need for more counselors and certified teachers, because current funding cannot reach all of the school’s 1,500 students. Perez also said the infrastructure of the high school is run down.

“We need windows, we don’t have windows,” Perez said. “Who wants to go to a classroom without windows? It doesn’t motivate you.”

“Students are the missing link, they are the bridge to making the educational system better,” said Pashael Dorsey, a senior at Oakland High School who is involved with the student advocacy organization Californians for Justice.

In May, organizers with Californians for Justice lobbied the state Board of Education to create a formal process for districts to collect student input before writing accountability plans. They also asked school districts to offer menus of options to engage students, and for state leaders to update the questions in the Local Control and Accountability Plan template to make districts clearly show how they engaged students.

Some state Board of Education members raised concerns that a formal process for student engagement might limit districts’ flexibility, EdSource recently reported. But Californians for Justice argued that if the requirements for student input remained vague, some districts might do only the bare minimum to involve students.

Saa’un Bell, lead organizer for Californians for Justice, said students would attend the state Board of Education meeting July 10 to lobby for more involvement in the accountability planning process, and ask for revised guidelines for gathering student responses.

Arun Ramanathan, CEO of the San Francisco-based nonprofit organization Pivot Learning Partners, said that while some school districts have effectively engaged students in conversations about spending, other districts have not. Ramanathan said that some of the best outreach includes districtwide surveys, parents and community meetings and translation services.

“Parental and community engagement has meant something very different in every district,” Ramanathan said. “They were not thinking about student engagement through most of this process.”

The Oakland Unified School District has brought students into the discussion about how to spend the funds from the Local Control Funding Formula by creating a student advisory committee with representatives from all the high schools in the district, Lopez said. Two student directors elected from that group sit on the school board to bring students voices to the discussion.

Lopez said students who are involved with their districts’ budgeting processes and are trained in how to create budgets become more effective decision-makers.

“Students are experts in their own realities,” Lopez said, adding that students know what areas of their schools need improvement and where their education is lacking. “When we look at young people as experts, we are really able to see them as partners and add a critical value to how funding is going to be spent.”

Ramanathan said that getting students involved is critical to the success of local control funding because they are able to report visible changes in schools. To have students participate in the process helps districts direct funding toward the most pressing needs.

Districts must submit their spending plans to the state Board of Education before its next meeting.

Read more in our special report on education inequality in San Francisco. Buy a copy of the winter 2014 print edition through the website, or consider becoming a member and get every edition for the next year.